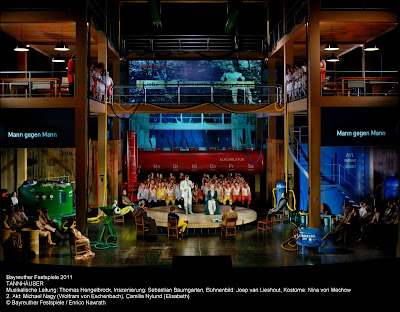 Whilst I had not made every effort to avoid all contact with reviews, I had tended to pass them by, especially since this was a new production and I wanted to come to it as free of preconceptions as I could. Yet, though I had picked up little detail, I had sensed a widespread, perhaps even universal, negativity concerning Sebastian Baumgarten’s staging of Tannhäuser. That had spurred me on, at least to a certain extent, to search for what might be valuable in it, to attempt to discover what grounds there might be for a dissenting opinion. Unfortunately, that was to prove a devil’s advocacy too far. 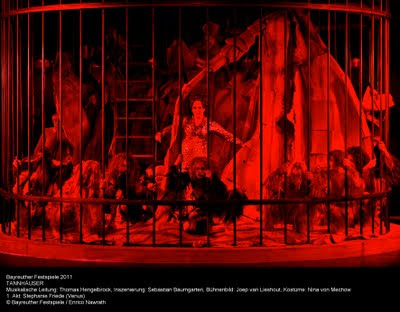 Often one finds a good idea that might have been better presented, or a questionable idea that has nevertheless been thought through and consistently brought to the stage. Here, it took a long time to work out what on earth the idea might be, but a moment’s consideration to appreciate that it was not necessarily the best Konzept for Tannhäuser, and not much longer to realise that it was confusingly presented amongst a host of irrelevances, which seem designed merely to provoke rather than to enlighten. For it is the setting that dominates everything else, a chemical factory as designed by Joep van Lieshour. Or at least that is what I could garner from looking at it, with pipes, gas, an alcohol machine with daily rations, and stage business from employees which begins before the performance and continues throughout the intervals (along, during the first interval at least, with some people on film who appear to have no connection with anything or anyone else). It appears, from reading the programme, that Lieshour’s ‘obsessive Installation’ is the principal character (‘Hauptrolle’) in the production – so much for Tannhäuser and Elisabeth – and this installation’s business is recycling of human excrement into food and alcohol, the latter so as to pacify and therefore to prevent rebellion. (As the late Anna Russell used to say, ‘I’m not making this up, you know!’…) That might all have been an interesting idea in itself, but even with a casuistry that goes beyond the Jesuitical, it is difficult to relate it to Tannhäuser. 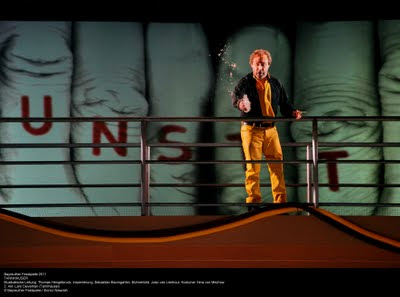 If one goes beyond the set – though it is difficult to do so, given its overwhelming presence – one finds perhaps an alternative Konzept, which may have something more to say about the work. The problem is more that its presentation is so unclear that puzzlement is a far more likely outcome. It seems that Baumgarten wishes to dissolve the polarity between the Wartburg and the Venusberg: a dissolution in which, after all, Wagner himself would engage in subsequent works. One really has to struggle, though, to work that out. If the ‘obsessive Installation’ is the Wartburg, the Venusberg emerges sometimes from within, or rather from underneath. Why its denizens resemble apes, though, I have no idea. Are they an extremely primitive life form, or the product of a chemical experiment? The odd thing is that so alienated has one become, it has become difficult even to care what the answer to such puzzles might be. Venus trying to break into the Wartburg during the song contest is a nice tough, akin to an unwanted guest at a wedding. But why, o why, does the production conclude with her having a baby? Had it been one of the other bestial brothel workers – Venus, by contrast, seems thoroughly human – one might have understood, but it is a strange plot twist for a madam, whom one might suspect to have gone beyond the age of child-bearing age. Perhaps that is the miracle for which all have sought? Or is it that she, unlike the others, is honest and therefore fruitful? One can only speculate. Moreover, there was no evidence of the director having engaged with the score at all: that Wagner wrote music dramas, or at least in this case Romantic operas, seemed to be of no interest to him. 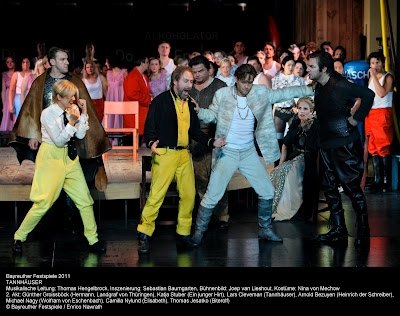 I mentioned further irrelevances, so ought to list a few. People sit on stage: I had assumed they would turn out to be the Wartburg guests, but no, they merely sit on stage. Were they supposed to represent the rest of us in the audience? Or were they merely a product of a desire to sell more tickets? Who knows? The Shepherd Boy – not a boy – seems merely to be a drunken compère: I was put in mind of an especially irritating additional game-show character in a yellow jump suit from the 2006 Salzburg production of La finta semplice, but doubt that that would have been the dubious ‘inspiration’. Sub-Brechtian slogans appear on screens, or on placards, from time to time; sometimes they are literally meaningless. We seem to be meant to draw something from an apparent polarity between art (Kunst) and work (Arbeit), though quite what, in the context of the production, I do not know. A Virgin figure is sometimes shown on the screen, with especial emphasis on her foregrounded feet, whose toes wiggle. Sore feet from a pilgrimage?

Perhaps most perplexing of all is the question of who any of the people on stage really are. Since little attempt seems to be made to integrate the ‘obsessive Installation’ into the story, one ends up trying to assign them roles within the factory. Is Hermann the boss and Elisabeth therefore the boss’s daughter? Why then does she spend all of her time wandering listlessly around the factory? Most heiresses might have an alternative residence. Tasteless is perhaps the kindest description one can offer of having her make her exit by voluntarily entering a gas chamber: I do not know what else to say about that. And then, the final slogan, which at least presents Wagner’s words (to Cosima, 23 January 1883), namely that he still owed the world a Tannhäuser. I hope that Baumgarten did not mean that we now beheld the culmination of Wagner’s frustrated desire; I hope more strongly still that Baumgarten did not mean that he still owed the world a Tannhäuser and that we shall witness another attempt. 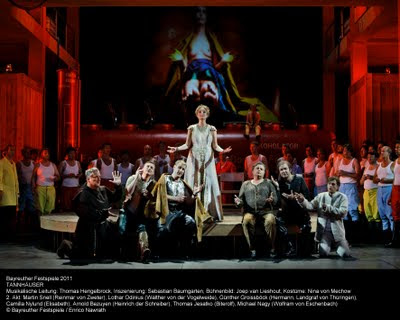 Musically, things were better, though rarely at a level for which one might justly have hoped (certainly inferior, taken as a whole, to the recent Covent Garden production, reviewed here). I apologise for devoting so much more attention to the staging, but that reflects the apparent priorities at work. Thomas Hengelbrock presented what at times proved to be an interestingly revisionist account of the score (essentially Dresden, but from Wagner’s 1845 lithographic copy). There were certain differences from what one usually hears, not least in terms of the first act music following the disappearance of the Venusberg, but without having the scores to hand, I cannot comment in detail. Perhaps more importantly, and as one might expect from someone with an ‘early music’ background, Hengelbrock stressed Wagner’s early Romantic inheritance rather than what the work was to become. (Personally, I always find myself regretting the omission of the music for Paris, but I appreciate that there are arguments for Dresden too.) Mendelssohn and Schumann seemed guiding spirits, especially during the Overture, though the latter’s presence was not always beneficial, Hengelbrock imparting a somewhat four-square quality to some of the phrasing. (In Schumann’s symphonies, and indeed many of his other works, the trick is to conceal that quality, not to bring it out.) There were other occasions on which he brought out Italianate qualities, not least in what became almost a stereotypical ‘love duet’ between Tannhäuser and Venus. There were colouristic benefits, however, especially with regard to the melting Harmoniemusik, for which the players must naturally be credited. 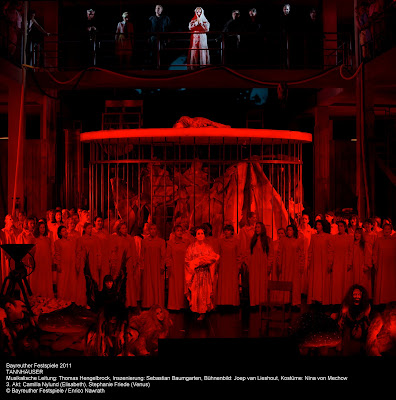 Lars Cleveman was an adequate Tannhäuser but hardly an interesting one. His tone appears to have become noticeably more baritonal than it was. Camilla Nylund had her moments as Elisabeth, but there were passages when she proved more than a little intonationally challenged, quite painfully during the second act. It was a pity that Stephanie Friede’s Venus became somewhat squally later on, since she displayed an intriguingly rich timbre during the first scene; perhaps her vocal portrayal will gather confidence over time. Two performances, however, were excellent. Günther Groissböck displayed the most recognisably ‘Wagnerian’ voice, and sang handsomely indeed as the Landgrave. And if Michael Nagy could not efface my memories of Christian Gerhaher at the aforementioned Covent Garden performances, no one in my experience ever has, whether live or on record. Nagy’s Wolfram was attentive to all aspects of the text, and impressively acted too: I do not recall Wolfram’s jealousy registering quite so clearly, or movingly. Especial mention must be accorded to the superlative Festival Chorus, excellently trained by Eberhard Friedrich, clarity and weight effortlessly combined.


Finally, a few words concerning the programme booklets. I am sorry to say that the English translations read as if they had been produced by an extremely primitive version of the Google translation service. The only answer – fine for those of us who could, but doubtless irritating for those who could not – was to read the original German. But why, then, translate in the first place? I do not wish to harp on about the matter unduly, but to show that I am not being unreasonable, here is a sample, taken from a brief interview with Hengelbrock:

Right from the overture, things begin to mix up completely. But take the entrance aria of Elizabeth [sic] as an example. She does not appear as a chaste virgin, but when the ‘lift up bosom’, you can hear this in the surges of the strings. The stormy woodwind tripoles [triplets?] find themselves in jubilant aplomb in the Italian Symphony performed by Mendelssohn.