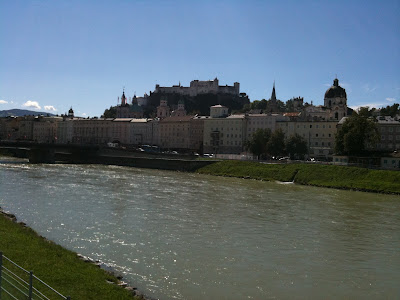 I shall soon be fleeing these shores for a few days, to make my near-annual pilgrimage to the Salzburg Festival. With a degree of sadness, I realise that it will be my first visit on which I shall not be hearing a single note of Mozart - or rather, not during the performances themselves, since I am sure the tourist industry will not permit me to close my ears entirely to the city's greatest son. There is, nevertheless, a great deal to look forward to, and I shall be reporting back regularly.


There will be two fully staged operas, Die Frau ohne Schatten, and The Makropulos Case, both with the Vienna Philharmonic in the pit. (If the orchestra were the only noteworthy feature of the festival, it would probably suffice to make it the greatest in the world.) Die Frau is conducted by Christian Thielemann, and directed by Christof Loy. Those reports I have read so far of Loy's production have been more or less unremittingly negative, but we shall see. The cast includes Stephen Gould, Anne Schwanewilms, and Evelyn Herlitzius. The Makropulos Case is directed by Christoph Marthaler, who made an excellent job in Paris of Katya Kabanova; will that magic return, or shall we be subjected to something more akin to his Bayreuth Tristan? Esa-Pekka Salonen conducts a cast headed by Angela Denoke.
Opera in concert will also have a look in: a double bill of Stravinsky's The Nightingale and Tchaikovsky's Iolanta. The first is a work I have loved dearly, evertsince as a child I watched a BBC television broadcast of a concert performance under Boulez. I have never heard it live, though. Iolanta, with Anna Netrebko no less, will be an entirely new work for me: also quite an exciting prospect. Ivor Bolton - not the most obvious conductor for either composer, but who knows? - conducts. Other singers for the Tchaikovsky include Evgeny Nikitin, John Relyea, and Piotr Beczala.
The concerts are at least as promising. Maurizio Pollini will give an all-Beethoven recital, including the Waldstein and (!) the Appassionata. Thomas Quasthoff Simon Keenlyside and Pierre-Laurent Aimard perform Winterreise. More Schubert will be heard from the Hagen Quartet. And last, but certainly not least, Franz Welser-Möst conducts the Vienna Philharmonic (soloists, Christine Schäfer and Michael Volle) in Mahler's arrangement of Schubert's Death and the Maiden Quartet and Zemlinsky's Lyric Symphony.
﻿
﻿
Posted by Mark Berry at 11:49 pm