The four-hundredth anniversary of Gabrieli's death will fall on 12 August of this year. Let us hope - in vain, I fear - that a year neither blessed nor cursed by a host of auspicious anniversaries will bring a good number of performances. The motet In ecclesiis has a good claim to be Gabrieli's most celebrated composition; at any rate, it offers a fine introduction to or reminder of his polychoral writing: this is the Stockhausen Gruppen of its day. It is thought that the piece's origins - though sacred, the text is not liturgical - may lie in a ceremony, held annually on the third Sunday in July, in which the Doge and other Venetian dignitaries would attend Mass in the votive Church of the Redentore: building, ceremony, and music giving thanks for deliverance from the plague. Nevertheless, one can hardly help but think also of the galleries of St Mark's Basilica; nor can one help but sense that Monteverdi and Schütz lie just around the corner. Here are the Choir of King's College, Cambridge, the Philip Jones Brass Ensemble, and Sir David Willcocks: 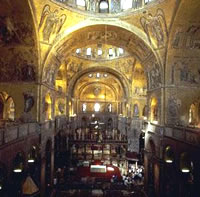