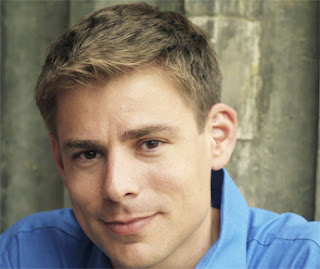 Having only given a cursory glance at the programme beforehand, it was a welcome surprise upon arriving at this lunchtime concert to realise that the verse would all be Heine’s. First off were the Heine settings from Schubert’s Schwanengesang. The immediate impressions from the opening bars of Der Atlas were of excellent diction, Hanno Müller-Brachmann truly drawing one into the poet’s words, a reminder that Müller-Brachmann’s instrument is truly a bass-baritone, darker than one often hears in this repertoire, and of alert musicianship from Hendrik Heilmann on the piano. Those would be impressions that would endure, indeed deepen, throughout the recital. Müller-Brachmann quite rightly made no distinction between performance of words and music, the two coming together as Lied: the words ‘Du stolzes Herz!’ (‘You proud heart!’) received emphasis without the slightest disruption to the musical line. Ihr Bild was hallucinogenic, voice and piano as one, Müller-Brachmann and Heilmann offering an uncanny (unheimlich, one is almost bound to translate) synergy, not just unanimity, of the vocal line and the piano bass. There was, moreover, true rage, to be heard upon the final line: ‘daß ich verloren hab’!’ (‘that I have lost you!’). Heilmann showed himself fully adept at handling Schubert’s modulations and their meaning in Das Fischermädchen, the interlude between second and third stanza fairly taking one’s breath away, whilst his una corda playing in Die Stadt proved evocative in both pictorial and, crucially, metaphysical senses. Müller-Brachmann’s voice here and in Am Meer sounded properly Wagnerian in its musico-dramatic response, a reminder of his Amfortas and his Rheingold Wotan. A slight roughness of tone on the final line may have been deliberate: the woman has poisoned him with her tears. It was, if anything, a slight blemish in the face of such manifest sincerity. Finally, Der Doppelgänger: Müller-Brachmann’s initial tone and manner took us into his confidence as a teller of ghost-stories, proceeding truly to shake us at the great climaxes – Amfortas again – as the protagonist found himself, the wraith, revealed in the moonlight.

Brahms’s settings, though of course from a later date (1877-c.1885), are less Wagnerian, arguably more song-like in a ‘conventional’ sense. Within its more modest bounds, Der Tod, das ist die kühle Nacht emerged as a heartfelt gem, intimate but not withdrawn. Heilmann’s account of the piano part to Es schauen die Blumen emphasised its inward tumult, decidedly upon the verge of ‘late’ Brahms. The pianist’s way with the rocking water music of Meerfahrt and the glistening waves of Es liebt sich so lieblich im Lenze likewise hit the spot, the latter almost suggesting Debussy, the former’s syncopations telling musically just as they would in Brahms’s solo piano works. I was surprised and intrigued by how close the piano writing sounded to contemporaneous Liszt.

Schumann’s Liederkreis, op.24, received equally distinguished performances, expectancy present from the very opening of Morgens steh’ ich auf und frage. When Müller-Brachmann told us that he wandered through the day dreaming, as if half asleep, that was precisely how it sounded, the delicacy of Heilmann’s postlude both underscoring and unsettling. The mad hopelessness of Es treibt mich hin was searingly conveyed, whilst the echt-Romanticism of Ich wandelte unter den Bäumen sounded painfully beautiful. If Heine’s irony is lost here, that is Schumann’s doing, and what we gain as well as lose! For there was to be no sacrifice of tonal beauty, the third stanza of Schöne Wiege meiner Lieden (‘Hätt’ ich dich doch nie gesehen, Schöne Herzenskönigin!…’ / ‘Would that I had never seen you, though, fair queen of my heart!...’) as ardent as it was bitter. One could have said much the same of Schumann’s wondrous postlude. Beauty and danger – and beauty in danger – were equally apparent in Berg’ und Burgen schau’n herunter, Heine’s Rhine Journey. (Heine was himself of course a Rhinelander by birth, born in Düsseldorf; indeed, its university would eventually rename itself after him.) Poet’s and composer’s ambivalence were conveyed, as they must be, but again without hardening or lessening of tone. (Were I truly to scramble to criticise, I might note that Müller-Brachmann opened the second line with ‘auf’ instead of ‘in’, but I can think of nothing more negative to say.) Bitter beauty was also the hallmark of the final Mit Myrten und Rosen, its piano interludes almost unbearable, not just in themselves but as a consequence of what had gone before: evidence, were it needed, of a true collaboration between two fine musicians. Love’s spirit (‘Der Liebe Geist’) was both rendered ravishing and yet lain bare as a pernicious delusion: the Wahn of Schopenhauer and Hans Sachs. For an encore, we were treated to a rapt, painfully seductive, further Schumann setting, Die Lotosblume.

Müller-Brachmann’s artistry is by now well known, certainly in Germany but also in this country. Heilmann’s was new to me, but I hope to hear more; it seems that he is an active chamber musician too. (It sounded like it.) The concert will be broadcast on BBC Radio 3 at 2 p.m. on Saturday 21 January.
Posted by Mark Berry at 6:17 pm