Some especially puerile, needlessly irritating, marketing, involving pictures of condom packets – oddly chosen in so many ways, since few people find contraceptives especially erotic, and Don Giovanni would seem an unlikely candidate to have employed  them – had attended the run-up to this revival of Rufus Norris’s production of Don Giovanni. In 2010, it registered as the worst staging I had ever seen: a fiercely contested category, when one considers that it includes Francesca Zambello’s mindless farrago across Covent Garden at the Royal Opera – now, may the Commendatore be thanked, consigned to the flames of Hell. (Kasper Holten, Director of Opera, is said to have insisted, having viewed it in horror, that the sets be destroyed, lest it never return.) There were grounds for the odd glimmer of hope; Norris was said to have revised the production in the face of its well-nigh universal mauling from critics and other audience members alike. Yet the marketing did little to allay one’s fears, especially when reading the bizarre description on ENO’s website of a ‘riveting romp [that] follows the last twenty-four hours in the life of the legendary Lothario’. Something really ought to be done about whomever is involved in publicising productions; for, irrespective of the quality of what we see on stage, they  more often than not end up sounding merely ludicrous: in this case, more Carry On Seville than one of the greatest musical dramas in the repertory. Even if one were willing thus to disparage Da Ponte – and I am certainly not – does Mozart’s re-telling of the Fall in any sense characterised by the phrase ‘riveting romp’? 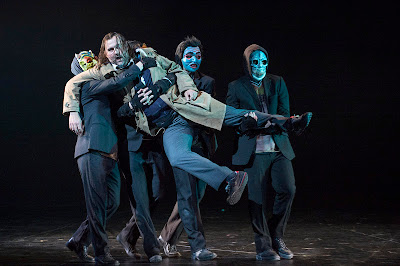 How, then, had Norris’s revisions turned out? Early on, I felt there was a degree of improvement. The weird obsession with electricity – certainly not of the musical variety – had gone, but not to be replaced by anything else. Certain but only certain of the most bizarre impositions had gone, or been weeded out, yet not always thoroughly enough. For instance, there was a strange remnant of the already strange moment when, towards the end of the Act Two sextet, people began to strip off, when Don Ottavio – an ‘uptight fiancé’, according to the company website – carefully removed his shoes and socks. No one reacted, and a few minutes later – I think, during Donna Anna’a ‘Non mi dir’ – he put them back on again. Otherwise, the hideous sets and other designs remain as they were, though one might claim a degree of contemporary ‘relevance’ in that Don Giovanni’s dated ‘leisure wear’ now brings with it unfortunate resonances of the late Jimmy Savile. Alas, nothing is made of the similarity. The flat designed as if by a teenage girl, full of hearts and pink balloons, remains; as does the building that resembles a community centre. Leporello still appears to be a tramp. There are no discernible attempts to reflect Da Ponte’s, let alone Mozart’s, careful societal distinctions and there is no sign whatsoever that anyone has understood that Don Giovanni is a religious drama or it is nothing. Norris has clearly opted for ‘nothing’.


There is, believe it or not, a villain perhaps more pernicious still. Jeremy Sams’s dreadful, attention-seeking English translation does its best to live up to the ‘riveting romp’ description. A few, very loud, members of the audience did their best to disrupt what little ‘action’ there was by laughing uproariously after every single line: the very instance of a rhyme is intrinsically hilarious to some, it would seem. A catalogue of Sams’s sins – sin has gone by the board in the drama itself – would take far longer than Leporello’s aria. But I no more understand why the countries in that aria should be transformed into months – ‘ma in Ispagna’ becomes ‘March and April’ – than I do why Zerlina was singing about owning a pharmacy in ‘Vedrai carino,’ or whatever it became in this ‘version’. It is barely a translation, but nor is it any sense a reimagination along the brilliant lines of the recent gay Don Giovanni at Heaven; it merely caters towards those with no more elevated thoughts than Zerlina going down on her knees, about which we are informed time and time again, lest anyone should have missed such ‘humour’. The lack of respect accorded to Da Ponte borders upon the sickening.


Edward Gardner led a watered-down Harnoncourt-style performance. At first it might even have seemed exciting, but it soon became wearing, mistaking the aggressively loud for the dramatically potent. Where was the repose, let alone the well-nigh unbearable beauty, in Mozart’s score? A peculiar ‘version’ was employed, in that Elvira retained both her arias, whereas Ottavio only had his in the first act. On stage, Prague remains preferable every time, despite the painful musical losses its adoption entails; sadly, few conductors seem to bother.


Iain Paterson remains bizarrely miscast in the title role, entirely bereft of charisma. Darren Jeffery’s Leporello was bluff and dull in tone. (How one longed for Erwin Schrott – in either role, or both!) Katherine Broderick was too often shrill and squally as Donna Anna, and her stage presence was less then convincing, shuffling on and off, without so much as a hint of seria imperiousness. Her ‘uptight fiancé’ was sung well enough, by Ben Johnson, though to my ears, his instrument is too much of an ‘English tenor’ to sound at home in Mozart.  Sarah Redgwick’s Elvira was probably the best of the bunch, perhaps alongside Matthew Best’s Commendatore, but anyone would have struggled in this production, with these words. Elvira more or less managed to seem a credible character, thanks to Redgwick’s impressive acting skills, quite an achievement in the circumstances. Sarah Tynan made little impression either way as Zerlina, though she had far more of a voice than the dry-, even feeble-toned Masetto of John Molloy: surely another instance of miscasting.


ENO had a viscerally exciting production, genuinely daring, almost worthy of Giovanni’s kinetic energy. It seems quite incomprehensible why anyone should have elected to ditch the coke-fuelled orgiastic extravagance of Calixto Bieito – now there is a properly Catholic sensibility – for Rufus Norris. whose lukewarm response at the curtain calls was more genuinely amusing than anything we had seen or heard on stage. Maybe the contraceptive imagery was judicious after all.