On the centenary of Pierrot lunaire... 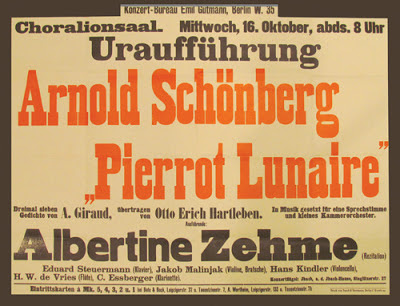 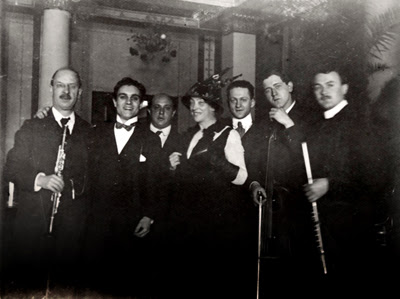 ... or rather of its first public performance, on 16 October 1912. Is there any work that stands so proudly before the music of the twentieth century and pushes the Romanticism of the previous century to its extreme and beyond? Not even The Rite of Spring, whatever its musical greatness and the quasi-legendary nature of its premiere the following year. If too often today performances of Stravinsky's masterpiece have been neutralised, the Rite degraded into an orchestral showpiece, then Pierrot seems, like so much of Schoenberg's œuvre, still, in an almost Adornian sense, to resist. The very notion of adequacy in performance seems misplaced. It seems impossible even to agree upon how its Sprechstimme should be 'voiced'. The very make-up of its instrumental ensemble is prophetic of so much 'New Music' to come. Can one imagine Le marteau sans maître without Pierrot? More to the point, could Boulez have done? Peter Maxwell Davies's Pierrot Players, later the Fires of London, took Schoenberg's quintet as its core. Hans Werner Henze's Der langwierige Weg in die Wohnung der Natascha Ungeheuer took the same ensemble as its emobdiment of sickly, bourgeois expressionism - and, almost despite itself, despite the composer's intentions, ended up offering to the Pierrot-ensemble the most compelling music. Stravinsky, who could in equal measure hit musical nails squarely on the head and prove himself grotesquely wrong-headed, came perhaps closer to the truth than anyone else when he celebratedly described Pierrot as  'the solar plexus as well as the mind of early-twentieth-century music'. We might simply delete the 'early'. And so, in tribute to that performance in Berlin's Choralian-Saal from Albertine Zehme as reciter, Eduard Steuermann, Jakob Masiniak, Hans Kindler, Hans de Vries, and Karl Eßberger, here are the score and one of the great recorded performances of the Dreimal sieben Gedichte, from Boulez, the Ensemble Intercontemporain, and Christine Schäfer: