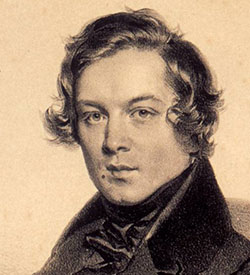 
Martin Geck has written a good few composer biographies: Bach, Mozart, Beethoven, and Wagner. In his most recent, first published in German in 2010, Geck turns his attention to Robert Schumann.


The author draws out some important biographical themes, not least the extent to which, from an early age, Schumann’s twin literary and musical careers informed one another. In the most impressive section, Schumann’s role as editor of the Neue Zeitschrift für Musik, in its heyday one of the most influential music periodicals of all time, is brought to vividly Romantic life. Schumann’s ‘friends’, fiery Florestan and introverted Eusebius, and the Zeitschrift’s ‘League of David’, dedicated to the defeat of the ‘Philistines’, played games of identity with readers not unlike those of German Romantic poets such as Schumann’s beloved Jean Paul.


The composer’s marriage is treated more sensibly than often, though Clara Schumann is treated with kid gloves. No mention is made of the Schumanns’ rank ingratitude towards Liszt; nor does Geck deal critically with Clara’s music – perhaps because, sadly, it is not intrinsically very interesting. The final years of Schumann’s life and career receive surprisingly short shrift. It is almost as if Geck stands reluctant to tell the harrowing tale of psychosis and the Endenich asylum. Moreover, the sheer strangeness of Schumann’s highly disturbing late works goes unexplored.


In general, a deeper understanding of Schumann remains elusive. One particular problem lies in the lack of any sense of place. We learn some facts about, for instance, Schumann’s time as a student in Leipzig; yet without a keener sense of what Leipzig, or indeed Saxony, c.1830, was like, they amount to little more than the sum of their parts. An historian of nineteenth-century Germany, alert to the differences between, say, Saxony and Prussia, might have had something revealing to say here. Alan Walker’s compelling Liszt biography presents a model too little followed in writing on composers’ lives.


Discussion of Schumann’s music – which is surely why we are most interested in him – is mixed in quality. Following a striking, if brief, discussion of the piano piece, Papillons, and citation of Schumann’s contention that he had learned more about counterpoint from Jean Paul than anyone else, comes the bizarre claim that the Marseillaise quotation in Faschingsschwank aus Wien is ‘almost unrecognisable’. I recall it leaping out from the page at me in a childhood piano lesson – and certainly not on account of any particular acuity. Analysis and even description tend to be approached and veered away from, an odd state of affairs for a treatment of ‘life and work’. Attempts at theoretical engagement, for instance, citation of Roland Barthes, seem somewhat forced and sit oddly with a generally belletrist approach. There is nothing wrong with the latter; sadly, however, Geck’s lettres prove more often grises than belles.


Historical situation of Schumann amongst his peers is dubious, largely consisting in his relative elevation through swiping at others. Quite why an irrelevant and, in the worst sense, merely subjective contrast with Schoenberg, whose music ‘is less popular than Schumann’s ... [because] it is more difficult to understand,’ is thought necessary but four pages in, I cannot imagine. Inevitably, though no less wearisomely, there comes a host of digs at Wagner. Even Beethoven has his middle-period works portrayed as one-dimensional when compared with Schumann’s music. As for Geck’s wildly unhistorical claims that ‘until Beethoven’s day composition was primarily a craft that required an adherence to traditional rules,’ and that ‘Mendelssohn and Schumann were the first musicians,’ not even the first composers, ‘to receive a proper formal education,’ hands must be thrown up in the air.