Prokofiev and Sheridan might not immediately sound the most obvious match. When one thinks about it a little, however, it is not incongruous – even if it remains surprising. The collaboration stands at a distance, of course, of more than a century-and-a-half: a distance that brings its owns challenges and opportunities. Mediating ‘in real life’ was Prokofiev’s partner, Mira Mendelson, who was translating into Russian the libretto Sheridan had written for Thomas Linley the Elder and Younger. As ever, things are lost and gained in translation, perhaps itself a form of performance or at least akin to performance. Dmitri Tcherniakov’s new production of Betrothal in a Monastery plays with these and other ideas, creating and recreating – and inviting us to do likewise. 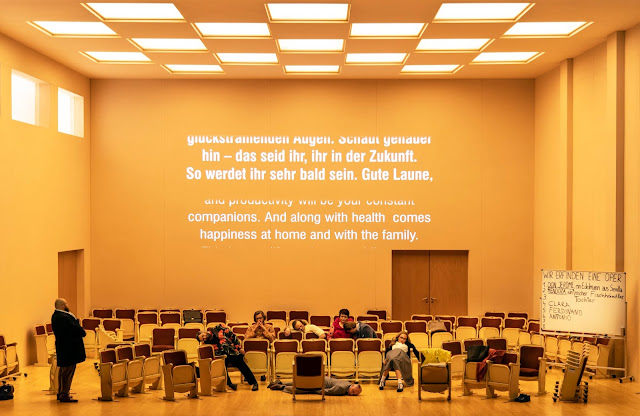 There is already parody in the text: that of ideas of honour in Spanish drama, that of opera, that of pasticcio, and so on. What remains? Many such questions are open; it is, to a certain extent, up to us. For it is the ‘opera community’, or rather some from its more extreme wing, ripe for parody or perhaps incapable for further parody, that lies at the heart of the production. We find ourselves at a meeting of a group for recovering opera obsessives: an aspirant singer; a burned out opera critic; a young woman whose affection for Jonas Kaufmann was sadly unrequited; a man who lives his life via ‘classic’ recordings; a star diva, whose attempts at a comeback have not proved successful, and who wishes to rid herself of this world; and so on. These people need help. But will they receive it from this course, which, in having them come to collaborate in consideration of an opera, might liberate them? And what would such liberation entail? We follow them through their breathing exercises, their quarrels, their bringing to life stock characters and more, the (necessary?) cruelties inflicted on them by the Moderator (or is he just a fraud?) As they put together an ‘opera’ of sorts, something that may or may not fit the bill, depending on who we are, when we are, where we are, so do we (or not).

Choruses are heard - by them, not by us! - through headphones, guiding excerpts from a ‘real’ work. There is no difficulty in apportioning further, incidental roles to the same singers (for instance, drinking monks in the fourth acts). It is a virtue or rather dramatic necessity, given that the number of group members remains the same. Once again, therefore, the process of dramatic creation returns to the foreground; once again, we consider possible connections between characters, perhaps (or perhaps not) in a new light. Our human caricatures build, it seems a community of their own, one that no one could or would have built for them. (Untrue, I suppose, given that director, cast, other musicians, and the audience do just that – but in a way, the untruth remains true.) Ultimately, they seem reconciled to the absurd(ist) glories of an operatic past to be plundered at will: represented on stage by a colourful, jolly, yet ridiculous pageant of characters and assumptions from past and present – just as Prokofiev was doing in something that both was and was not an opera buffa. How we judge that is up to us, but we know that some magic, something beyond mere construction, has taken place; the conceit has broadened out into a ‘real’ drama, a ‘real’ performance, whatever they might mean.

The opera is not often heard outside Russia. Here, wisely, there were a good number of Russian singers in the cast. There was much to enjoy from all of them, whatever their nationality, Moderator Tcherniakov having guided their dramatic progress with his customary skill. At the centre of machinations stood the magnificent Violeta Urmana, seemingly having a whale of a time sending up her very own star ‘role’, whilst retaining something poignant beneath. Aida Garifullina and Anna Goryachova both revealed strikingly rich voices, complementary yet contrasted, as if woodwind instruments that spoke. Stephan Rügamer and Goran Jurić offered finely judged parodies of parodies – again, without that being their sum total. Andrey Zhilikovsky’s touching Don Ferdinand left one wanting more. The whole was definitely greater than the sum of the parts: just as it should be.

If Daniel Barenboim’s leadership of the Staatskapelle Berlin – and the musical forces more broadly – sometimes sounded as if it might have benefited from a couple more performances truly to come into focus, there remained much to savour, especially after the interval. Conductor and orchestra relished Prokofiev’s quicksilver changes of mood, not only mirroring but commenting on, even contradicting what we saw and heard onstage. The composer’s extraordinary gifts as a melodist were reconfirmed and contextualised. Again, there was work for us to do – as there surely always will be in this enigmatic work. Some, booing at the close, clearly resented that; they always will. For the rest of us, it was an intriguing, challenging, and amusing evening.