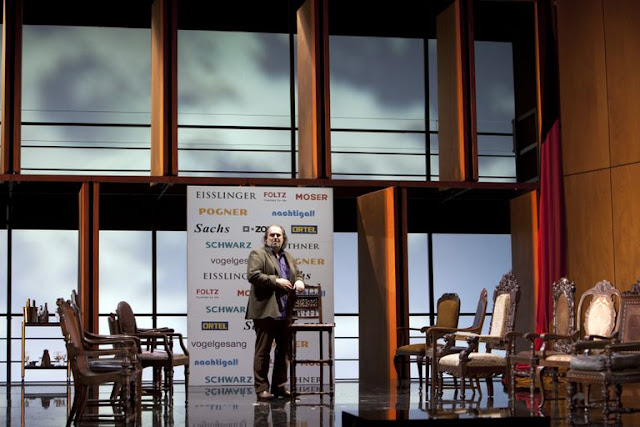 ‘Die Zeit, die ist ein sonderbar Ding,’ sings Strauss’s Marschallin: a truth that seems to grow truer with our – at least with my – every advancing year. More prosaically, and more specifically, we might also say that openings and re-openings, constructions and reconstructions, creations and recreations, unifications and reunifications are strange things: rarely what they seem, and rarely what the fashionable, the non-critical presume them to be. Such ideas lie at the heart of Die Meistersinger: at its heart, concerned with the ongoing creation and performance of a song, within a society that has both placed such endeavour at its heart and also done its utmost to thwart the same. Perhaps all societies, at least all bourgeois societies – what could be more bürgerlich than this early modernity created and recreated by the nineteenth century? – are like that. As Schiller and Marx, Wagner too, insisted, left to his own devices, man – woman too? – will create as an artist; as all three lamented, that ‘natural’ state of affairs rarely, if ever, pertains. At best, a higher, mediated state of unity might be achieved; but how? 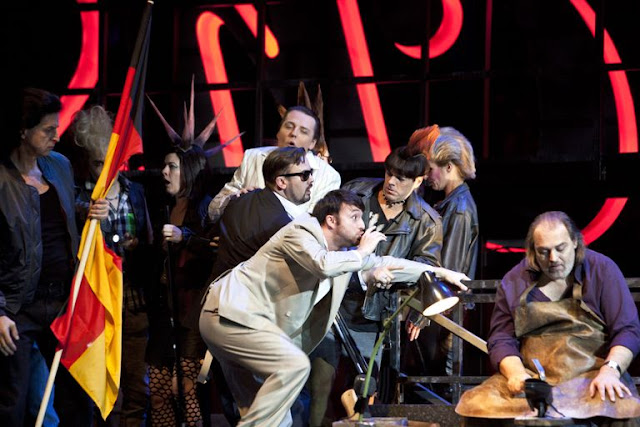 Such thoughts came very much to mind watching, for the first time, Andrea Moses’ 2015 production of the work. Not because it really engages with them: alas, this is a sorry piece of theatre, considered as staging. Nonetheless, the work and its traditions enabled, at least in retrospect, some manner of critique. The gravest charge against the production is its tedium, the second its hapless incoherence. (The two are not unrelated.) It seems to suggest ideas, yet they never seem grounded, never connected; its amateurism, in the worst sense, suggests what the Masters might think of Walther before he sings a note (and many of them do once he has). For the action plays out mostly as if this were the most hidebound of traditionalist stagings, albeit without either that sixteenth-century (or even nineteenth-century) ‘original’ context or a new one to put in its place. The first act takes place in something resembling a concert hall – there are apprentice ushers, or something like that, in black tie – or perhaps a corporate event, Masters’ names displayed as if sponsors. Nothing, however, makes much sense, since there is no apparent effort to explain, to criticise, to create, to recreate, and so forth. Or is it a sportsground sponsors’ lounge, competition here being the thing? Perhaps, for the second act takes place in what seems to be the backstage of a stadium. For some reason – or none – the inhabitants of Nuremberg are now in punk garb. That seems implicitly to be the reason, though surely not the intention, for their descending into a riot, in which football flags are waved. Beckmesser has meanwhile, bafflingly, squeezed himself into sixteenth-century costume. Everyone else has otherwise wandered around aimlessly, save for Walther and Eva who wrap themselves in an ever-present German flag. An Orthodox Jew walks across stage during the turmoil, untouched by and seemingly oblivious to it. I have no idea either… 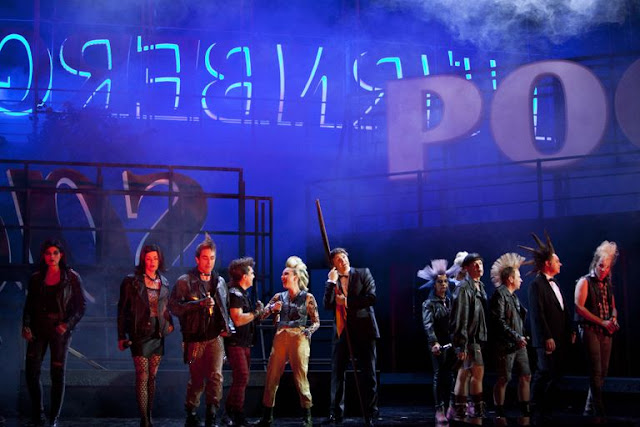 The first part of the third act moves to a library: fair enough in itself, as setting for Sachs’s world chronicle, although there is no sense of how it relates to anything that has gone before, still less of who these people might be and why they might act as they do. The Festwiese scene attempts, I think, to tie things together, but not only is it too late, the message it appears to project is glib and disturbing, as well as ultimately incoherent. For the production’s origins now come more clearly to the fore. It had originally been intended that this Meistersinger should reopen the renovated eighteenth-century house on Unter den Linden. Work having fallen behind – or new work having been necessitated – that was delayed until 2017, Daniel Barenboim and the outgoing Intendant, Jürgen Flimm, then presenting a staged version of Schumann’s Scenes from Goethe’s ‘Faust’. Both ‘reopenings’, anticipated and actual – even the latter was a little false, the theatre soon closing again until December – were scheduled for Germany’s new national day, the Tag der Deutschen Einheit, which explicitly celebrates the anniversary of reunification in 1990. The first performance, it seems, took place in two parts: the first two acts on the day itself, the third the following day (the equivalent to Wagner’s Johannistag morning-after to Polterabend, I suppose). 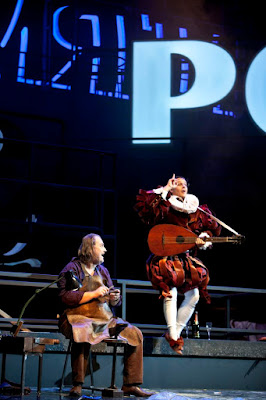 With that in mind, one can perhaps see the celebrations by the Spree, our Pegnitz substitute, as trying, Sachs-like, to bring peace, even unity, to the revelry and violence of the night before. Alas, it is all terribly confused. Is the ‘night before’ the troubled German, past and the ‘morning after’ the here and now? If so, that makes little sense in terms of the premiere chronology; it also makes no sense of the settings, all ‘present’, if little related. The backdrop of the absurdly ‘restored’ old Berliner Schloss – ironically, a mere Potemkin façade, – suggests, however, that we are intended to reflect in such a way. Those who might have preferred a restored GDR Palast der Republik or something new will have had very different thoughts, uneasy at this banal, Disneyfied celebration of capital’s victory over socialism. (I saw the ‘new-old’ façade for the first time fully risen, whilst walking to the performance: a dispiriting sight indeed.) Seemingly as an afterthought, a few Kaiserreich flags are flown and, captured by Sachs, cast into the river. Given that the palace was the Hohenzollerns’, ‘modern’ rejection of that flag seems disingenuous. Most bewildering, though, is the appearance of two Arab ‘sheikhs’ with bodyguard. Our Master ‘sponsors’, their logos again proudly displayed, act with great solicitude to them, explaining events – would that they had to us – and caring for their needs. Have they funded the ‘event’? And if so, what might that mean? They notably leave the stage before the close, excluded or excluding themselves from the final celebration, replete with German flag. A celebration of corporate, ‘moderate’ nationalism, then, from which financially enabling non-Germans must absent themselves? Try as I might, I cannot come up with an inoffensive explanation – even should that prove to be mere cluelessness. 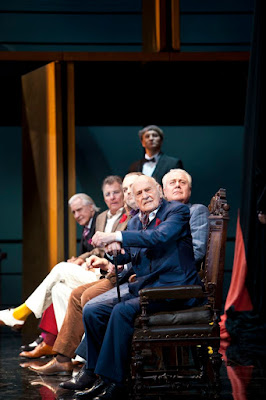 Faced with such irritating nonsense, I found it difficult to concentrate on the musical performances in themselves, though much was clearly admirable. Barenboim’s command of the outstanding Staatskapelle Berlin continues greatly to impress, flexibility, clarity, delight in the score’s Mozartian, conversational qualities, and a thorough grounding in Wagner’s harmonic plan unquestionably apparent. His idea of presenting an array of old Masters – some may recall a similar concept at the 2006 Edinburgh Festival to mark Brian McMaster’s farewell – was engaging. It was a delightful thing indeed to encounter and re-encounter so many great names from the past, such as Siegfried Jerusalem, Graham Clark, and Olaf Bär, all the way to Franz Mazura, due to celebrate his ninety-fifth birthday the following day. Matti Salminen’s Pogner fell into that category too, occasional instability a price well-worth paying for sheer likeability. Wolfgang Koch gave a typically thoughtful, musicianly performance as Sachs, interacting nicely with Martin Gantner’s Beckmesser, Julia Kleiter’s sprightly, sometimes radiant Eva understandably torn. Burkhard Fritz’s Walther had his moments – though they were not always happy; he kept going, though, which is something. Siyabonga Maqungo’s David and Katharina Kammerloher’s Magdalene both impressed in lively, detailed assumptions, making as much as could reasonably be expected from a difficult situation.

If, ultimately, many of these performances seemed more observed than felt, that may well have been the fault of the production – and my inability to rise above it. There will be other creations and recreations, though, other attempts to construct and reconstruct the past, present, and future. This production’s predecessor from Harry Kupfer still lingers in the mind; let us hope the next in line will prove worthier.