At last, an opportunity for me to see Rienzi, the only Wagner opera I had yet to see in the theatre. A long-held ambition fulfilled, then? Yes, just about. Alas, that was about it, though. There were two major, frankly insurmountable problems: first, the miserable conducting of Evan Rogister; second, the butchered version employed, so extreme as to render what we heard musically and dramatically nonsensical. Rarely in the theatre and never in the Deutsche Oper have I heard such a sustained display of incompetence in the pit as Rogister’s. The number of times the Overture came close – or more than close – to falling apart did not bode well. Singers, solo and chorus, often proved alarmingly out of sync with the orchestra; there was, moreover, no sign of the conductor so much as noticing, let alone putting things right. Occasionally, the music came into focus; it was bound to eventually, I suppose, though never for long. Interpretation? Forget it. It was hardly surprising that, for long stretches, this great Wagner orchestra seemed to have given up. Was this in fact Covent Garden’s dread Daniel Oren working under a pseudonym? A dark thought indeed. One to avoid with equal vigour, I fear. 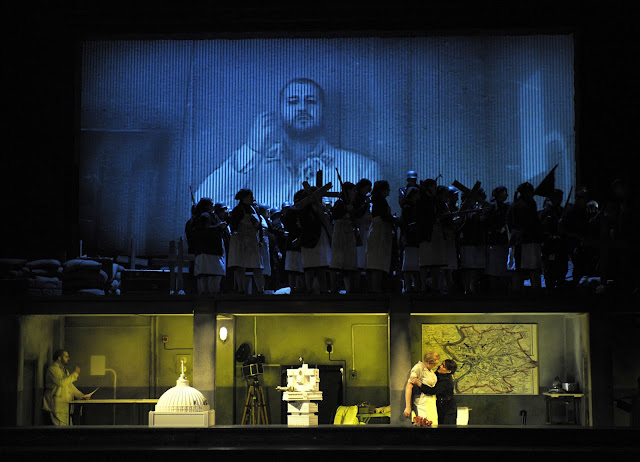 However, even a Daniel Barenboim – if only he would consider one day conducting Wagner’s Cinderella – would have struggled with the version of the score handed to him. The composer struggled with its unintentional length, of course. His witness in Mein Leben is instructive and entertaining. Quite what it would mean to present a ‘complete’ Rienzi is unclear; the closest we may come is the version conducted by Edward Downes for a BBC radio recording, and even that falls short according to some understandings. Whilst there is something to be said for glorying in its length, for rendering its problems a virtue, that is unlikely to be an option any time soon. Cuts are, in principle, not the end of the world – and may, for many, prove the opera’s redemption. This, however, was something else, not only in the savagery of its cuts but in there seemingly arbitrary nature, as if someone had attempted to present a ‘children’s version’, but had not really tried, and had succeeded only in cutting it down to whatever the specified size had been. The number and nature of non sequiturs, musical just as much as dramatic, straightforwardly defied comprehension.

Of the work’s roots in Meyerbeerian grand opéra, there was well-nigh nothing remaining in structure, and merely the odd procession (usually truncated) as meaningless evidential detail. It is difficult to imagine someone making anything of the nobles’ role, let alone identity, nor indeed of anyone else’s. Of the seeds of what was to come, often overlooked, the little that remained ironically resembled, apparently more by accident than design, Wagner’s notorious demolition of Meyerbeer in Opera and Drama: an ‘outrageously coloured, historico-romantic, devilish-religious, sanctimonious-lascivious, risqué-sacred, saucy-mysterious, sentimental-swindling, dramatic farrago’, albeit hacked away at a bargain-basement cut-price quite at odds with anything might could have imparted meaning to the experience. Poetic justice? Perhaps, but to what end? 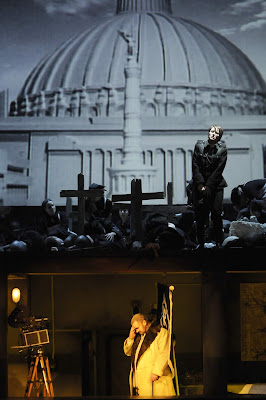 That the work’s promise – more than promise, as any of us who knows it will attest – nonetheless shone through is testimony not only to intrinsic merit, but also to some fine singing and, to a lesser extent, to Philipp Stölzl’s 2010 production. The latter is doubtless one-sided. In other circumstances, I might have been more inclined to complain about its too-ready association of Rienzi with fascism and, in the case of the Overture, with Hitler himself. The vision, in more than one sense, is at least memorable there: a Rienzi body-double looking out over the Alps from Berchtesgaden, listening to the music, conducting along, and resolving to rule the world. Use of video – great credit should go here to fettFILM – is unnervingly effective, permitting Rienzi as silent film speaker to address the masses, to turn them, even as we see and hear something else. A fascist design aesthetic in dress, colour, and architecture heightens the unsubtle line; at least, though, it is a line. In any case, is subtlety really what we are looking for in Rienzi? The chorus in particular might nonetheless have been better directed. Stölzl’s trademark tableaux vivants are one thing; they work more meaningfully in his Deutsche Oper Parsifal, I think, even though that came later. Too often, though, one had the impression poor chorus members were merely being left to fend for themselves.

In the title role, Torsten Kerl had his moments, although too often he proved vocally stretched. There could be no faulting his enthusiasm, though, nor his skills as a film propagandist. (His Overture body double, Gernot Frischling, deserves credit too.) Annika Schlicht, however, in the Wilhelmine Schröder-Devrient role of Adriano, proved the star of the show: clear as a bell, bright and subtle as a speaking clarinet, and very much a breeches mezzo on stage. (Schröder-Devrient seems to have struggled to learn the part: there were clearly no such difficulties here.) I hope to hear – and see – more from her. Insofar as the cuts permitted, Elisabeth Teige also impressed as Irene, as did those assuming what were now less smaller than miniscule roles. Rienzi, though, deserved so much better. On the positive side, I stand all the more determined to see a production and to hear a performance – preferably in tandem – that in some sense do justice to this singular work. And if someone would kindly return the manuscript from Russia, that would be nice too.