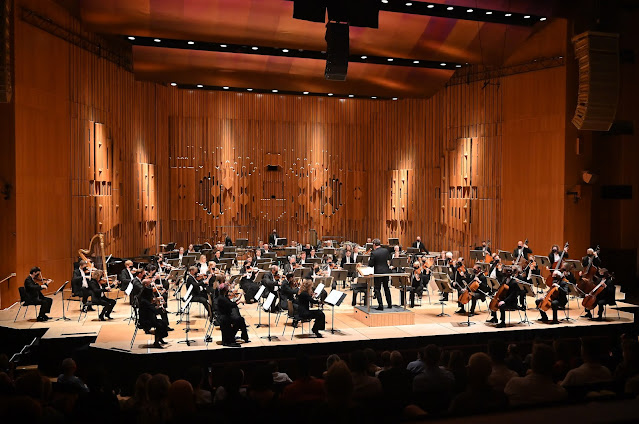 Another return to old musical friends at an old musical haunt: in this case the LSO at the Barbican. It proved as moving and thrilling as any other, although quite different in nature, the earliest music here being the first of three LSO Panufnik Composers Scheme commissions, Charlie Piper’s Flēotan, from 2007, the newest two premieres of works from this year and last. Patricia Kopatchinskaja and François-Xavier Roth having been unable to travel here on account of interminable travel restrictions, the British premiere of Francisco Coll’s Violin Concerto had to be postponed, replaced with the live audience premiere of Mark Simpson’s Violin Concerto. The rest of the programme was unchanged. Ryan Wigglesworth stepped in at five days’ notice to learn and conduct five pieces new entirely new to him. Wigglesworth, Nicola Benedetti, and the LSO did all five pieces—and themselves—proud.


Flēotan’s title comes from an Old English word, meaning ‘to float’ or ‘fleeting’. (It would later form the foundation for a larger LSO work, The Twittering Machine.) Its glistening, somewhat metallic colours, seemingly born as much of French orchestral tradition as anything closer to home, were married, both in work and performance, to a sharply rhythmic profile. It came across as an extended fleeting moment: perhaps evoked more than merely represented. It was followed by Ayanna Witter-Johnson’s Fairtrade?, which aims to bring to the audience’s attention the high cost of ‘fast fashion’, encouraging us ‘to consider our economic choices and the cost of our convenience at others’ expense’. Whirring, whirling, the machine-like sounds here, aptly enough, came across as necessity rather than choice. A sense of going inwards, of highlighting humanity crushed by such processes, concluding this unsettling, finely crafted piece. 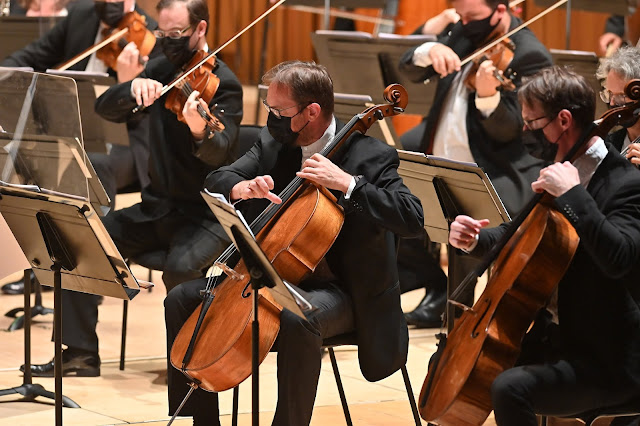 Betsy Jolas’s Well Met Suite transforms four pieces from her 2004 Well Met 04 – Pantomime for 12 strings, into a suite for strings. Sharply etched, even contagious (a word for our times!) the material maintained a keen sense of narrative, though not necessarily one that could be put into words. Relationships between instruments took on a life of their own: double bass pizzicato inciting solo cellos, in turn inciting strings above. Stamping of feet was no gimmick, coming across instead as light yet necessary reminder of theatrical roots. Were those shades of Bartók we heard at times? Perhaps, but there was no suspicion of imitation. Scurrying development imparted its own identity and justification.


George Stevenson’s Vanishing City remembers those who, over the winter of 1941-2, successfully undertook the well-nigh incredible task of camouflaging Leningrad’s skyline against German attack. A hard-edged opening gave way, via Russian-sounding brass, to fantasy and still darkness. Bells recalled to us not only what was being lost, but what was being kept. Like everything else heard here, there was fine command of the orchestra as instrument and as collective of instruments: testament to the excellence of performances from the LSO and Wigglesworth, as well of course as to that of the work of composers young and old. 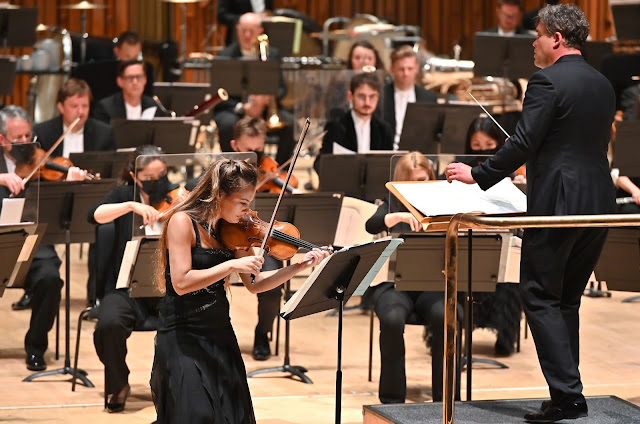 The second half was given over to Mark Simpson’s Violin Concerto. Its scale, but also its emotional impact, were palpable, an audience starved of music for so long responding with enthusiasm to a performance that had kept them on the edge of their seats. Simpson had begun work on the piece just before lockdown last year, and had found, ‘as the pandemic worsened … that it was impossible to “carry on as normal”,’ that ‘the work would need to explore a different set of responses’. It certainly seemed to be the case that audience, composer, and performers alike were responding to shared experience. Its roots, aptly enough, lay in what had gone before, not least in Simpson’s strikingly fantastical violin writing: Szymanowski a hundred years on? Foreboding was recognisable, yet content was new. Tension between a past world in which we already had enough to be angry about and that which we wished—perhaps still wish—to conserve from it came to the boil, shaped and sustained through a keenly felt and projected narrative of five movements (Lamentoso, Dance, Andante Amoroso, Cadenza, Presto con fuoco – Finale). That second movement sounded just as the composer described it: ‘a fast, energetic dance that is in essence a response to having a huge amount of pent-up energy that I was unable to release during the period of lockdown restrictions.’ It and its successors likewise drew freely on ‘tradition’, whatever that may be, without sounding (or feeling) remotely hidebound. Benedetti’s virtuosity captivated throughout, nowhere more so than in a cadenza that was almost a solo violin work in itself—until one began to appreciate its dependence on earlier material, the Dance subdued, perhaps, and sublimated. The hectic frustration of the fifth movement, the LSO at inimitable full throttle, led to final release: much needed and much celebrated.