Mitsuko Uchida (piano)
Benjamin Marquise Gilmore (violin)
Philharmonia Orchestra
Esa-Pekka Salonen (conductor)
It should have been a bitter-sweet moment: the Philharmonia returning to live performance, yet also its farewell to Principal Conductor and Artistic Advisor of thirteen years, Esa-Pekka Salonen. It doubtless was in some ways, but there was a feeling of hope here too. Hope may be the cruellest of gifts: it dies last, as Donald Tusk was wont to remind us. In one of the many outstanding performances I heard from the orchestra and Salonen during his tenure, Dallapiccola’s Il prigioniero, the Beethovenian message of Fidelio was, after all, decisively turned on its head for the twentieth (and twenty-first) century: ‘La speranza … l’ultima tortura’.


And yet, Beethoven, notwithstanding banishment during the clash of anniversary year and pandemic, is still with us. So is the partnership of Salonen and Philharmonia, as he becomes the orchestra’s Conductor Laureate. And so too is that orchestra’s great history, which, to quote Salonen (responding to a spoken and filmed tribute from the orchestra), seems to learn its ‘tradition … through osmosis … like a biological process, certainly beyond words’. That too was how he had connected with his illustrious predecessors: Strauss, Furtwängler, Karajan, and of course ‘Dr Klemperer’. But that in itself could never have been enough, for ‘communal experience has been missing.’ For many of us, as for Salonen, the Internet ‘doesn’t quite work’ in this way. ‘It has to be this moment. You, and us, and the distinction between you and us disappearing.’ It was the return of that experience, ultimately, that gave us hope, not torture.


We opened with Bach, whom Salonen likened to Shakespeare, every generation having taken its own look at this music, interpreting and even mutilating it. First came Klemperer’s orchestral transcription—or should it be arrangement? We could spill endless ink over that alone—of Bist du bei mir, thought at the time to be Bach’s, now known to have been composed by Gottfried Heinrich Stölzel for his opera Diomedes and merely collected by Bach for Anna Magdalena’s celebrated Notebook. Salonen had heard it once on the radio and had been determined to get his hands on the score: a difficult task since it was owned by a private collector. We make, find, and invent our own Bach—constantly. This string version, made for the Los Angeles Philharmonic, flowed with grace, beauty, and enormous clarity. There was nobility too, not least in, dare I suggest, the almost Elgarian sound of the Philharmonia’s cellos. Somehow it seemed all the more fitting that this was not Bach, but something he cherished and enabled us to cherish. There is hope in that.


The celebrated Webern transcription—I am tempted to say re-composition—from the Musical Offering followed without a break. As Salonen had said earlier, notes sounded like stars in the sky: connected, yet separate. How they are connected is the thing—or rather, one of the things. The closer one listens, the more one discerns. Players must join the dots: and they did, music ricocheting across the stage, connecting itself, the players, and us. Again, the flow was measured and increasingly flexible, gathering pace and falling back—as in Salonen’s recording with the LA Philharmonic. It is a flexibility we may call ‘Romantic’, yet which is in truth as much Bach’s, Webern’s, Salonen’s, or music’s. 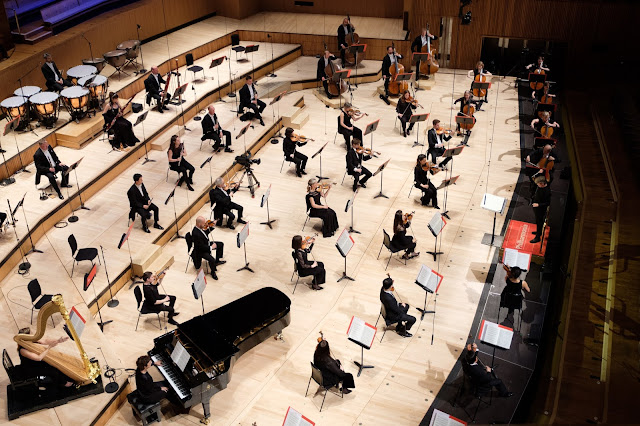 Berio’s version of the unfinished fugue from the Art of Fugue sounded darker, at least for much of its progress. It sounded both ‘earlier’ and ‘later’ too, less radically interventionist, so much so that the sound of a saxophone came as quite a shock. (Klemperer substituted saxophone for trumpet in an early, pre-Philharmonia recording of the Second Brandenburg Concerto.) There was a feeling of that starry sky opening up to reveal the very music of the spheres, Bach’s music growing—being grown—with all the patience in the world and beyond. And then it began to turn, to take off, to suggest the air of more than one other planet. As Bach was left behind, music became something else entirely: dependent and independent of ‘tradition’, whatever that may be.


The Prelude to Bach’s E major Partita was heard from above (the Royal Box): given to the stage as much as to the audience by concert-master Benjamin Marquise Gilmore. Once more, we heard something of the essence of Bach: flexible and regular, balanced and directed, simple and complex, sung and instrumental—in work and performance. Salonen’s Fog responded. Initially composed for ensemble for Frank O. Gehry’s (title derived from initials) ninetieth birthday, and now expanded for orchestra, it recalls the first music ever heard in Disney Hall. It was a moment Salonen had wanted to ‘embellish upon’. And how—in a fantastical recreation, slightly sinister and unquestionably magical, poised between mechanism and the spontaneously woven. Were those ghosts in the machine, or machines in the ghosts? The general answer seemed to be: why choose? Bach rarely did. There was overt process to be heard—post-Ligetian as much as post-minimalist?—that felt somehow oppressed, indeed as if by the fog of the title. Surely all those many years of experience as conductor as well as composer—in this case, from Salonen’s celebrated 1983 debut with the Philharmonia in Mahler’s Third Symphony—made their way, lightly and without fuss, into this performance. Descriptions of events may sound incongruous: a piano cadenza came seemingly out of nowhere, yet also out of somewhere, inciting a wash of well-nigh post-impressionist sound; unexpected orchestral riffs with hand drum beats; solo violin and flute duetting. And yet, they did not feel so. All the time, the clouds rained Bach, more or less explicitly. Like Bach’s music, work, performance, and our listening seemed to grow both in simplicity and complexity, and in connexion. 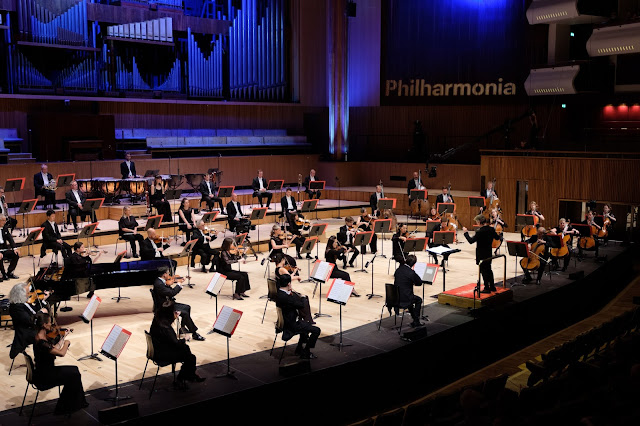 Beethoven’s Third Piano Concerto had been the first piece Salonen and Mitsuko Uchida played together. It made for a fitting finale here. The first Classical music we heard—all the more Classically Mozartian given forces necessitated by social distancing—sounded, if you will forgive the cliché, newly minted. That fabled, almost Boulezian clarity was once again present, likewise the Philharmonia’s cultivation of orchestral tradition. There was plenty of hushed mystery as well as wide-eyed awe. Post-Mozartian sadness turned to post-Mozartian vehemence: the tragedy of modernity, that we want Mozartian perfection yet cannot reach it. (We even begin to wonder whether Mozart did.) It was all the more tragic for being softly spoken. And then Uchida’s entry: defiant yet soon sad too. This was to be chamber music writ large, in an unhurried, flexible performance of great wisdom from all concerned. It was music-making to give no option other than to listen, to remind us why we were there. At its heart, of course, stood the Beethovenian humanity we have so longed for, and been denied, these past fifteen months. There was Klemperian orchestral granite too, as well as many of the virtues the elderly Klemperer admired in the young(ish) Boulez. Uchida’s shaping of phrases assumed the mantle of inevitability, though only in retrospect; for looking—listening—forward, all was to play for. That, literally, was hope, in an almost Newtonian tonal cosmos that may no longer be ours, but which can still immediately speak to us. I fancied at one point that the cadenza might metamorphose into the Emperor; but no, not every beautifully voiced E-flat chord leads there. Beethoven’s C minor daemon possessed the coda: this was the real thing, no doubt.


In the slow movement, we heard the rapt voice of experience—and once more of hope. The sincerity of orchestral response to that piano opening took on an almost religious—versicle and response—quality. New vistas were opened up by solo woodwind. The music flowed like a great river, yet was most revelatory in its whispered confidences, no matter from whom. It was rounded off beautifully, preparing for the next chapter, yet offering a lingering look back too. Sometimes, Orpheus gets to keep Euridice. Returning to C minor for the finale, we heard a Klemperian doggedness that knew not all dances are light, and that persistence is not the least quality in bringing forth joy. It was persistence in the return of the rondo theme, in fascinating, dialectical combination with the onward tread, hop, and skip of the Philharmonia bass, that drove this movement. It was quite unlike any other performance I have heard: perhaps not for every day, perhaps not to be repeated, but is that not what performance is truly about?


As an encore, ‘what Esa-Pekka wanted’, Uchida treated us to the second of Schoenberg’s Six Little Piano Pieces, op.19. Here, persistence again paid off, the resistance of that repeated major third (G-B) compelling music ‘itself’ both to ravish and dissolve—and yet remain. There is hope in that too; there must be. 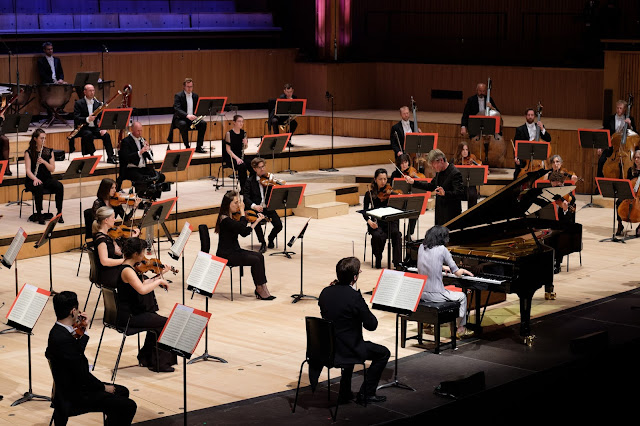