Following a day from hell at work and consequent mad dash to the station to reach St John’s Waterloo in time, this programme of two string trios, one a fragment and one a towering masterpiece not only of the trio but also of the whole chamber repertoire, proved just the ticket. Schubert’s torso, here given only with its first movement, the only one completed, worked well as a generous curtain raiser. Here, Anthony Marwood, Hélène Posner and Tim Posner caught its mood beautifully from the outset: graceful, variegated, and post-Mozartian—just, though in that ‘just’, like the ‘and’ of Tristan and Isolde, lies everything. The fascination of string trio texture, whether for players, listeners, or composer was palpable. Fresh, musical playing, as alert to moment as to line, had one delight—however much one ‘knew’—in the smallest of surprises. A questing development that never strained, briefly imbued with the rarest of sadness, gave way naturally, inevitably—however much craft may lie in that appearance—to the moment of return. Taking the second repeat added in the best way to yet another of Schubert’s celebrated ‘heavenly lengths’. The close, rightly, tantalised; the rest was silence—or rather applause, and then Mozart.


Mozart’s E-flat Divertimento—did ever a genre title seem so insufficient?—received an equally splendid performance. It unfolds with such miraculous ease and depth, that its more overtly contrapuntal nature beguiles as if somewhere between one of Bach’s Trio Sonatas and an endless—well, almost—trio from one of Mozart’s operas. At least, so it did here, the instruments as much as their players characters in a conversational drama to rival Strauss’s Capriccio. There may well be metatheatricality, but it is worn more lightly than Strauss’s: as much a consequence of historical position as anything else, yet nonetheless striking from our vantage point. Switching of roles between instruments brought a smile to my face every time in the opening Allegro and beyond. That first movement’s development seemed effortlessly to emphasise—always the contradictory thing with Mozart—the colour of keys and modulations, harmonic motion the driving force of this wordless drama. No equal temperament here. The trajectory to recapitulation climax and subsidence was just as well judged.


If anything, the emotional range of the Adagio proved wider still; that probably lies in its essence. It opened more chastely, turning soon more passionate. How beautifully, meaningfully different every string of each instrument sounded, expanding the cast of our divine comedy. No one understood such capabilities and the infinite uses to which they could be put better than Mozart. The recapitulation had all the richness of a second development, albeit with none of the struggle one would have found in Beethoven. Yet what radicalism we heard in the harmony, so long as we listened as invited. In the next movement, Mozart’s jesting with cross-rhythm seduced and perplexed, even as it satisfied. As happy as it was melancholy, it paved the way, if only in retrospect, for a disconcertingly ghostly theme to the following movement, that theme’s first variation necessary balm yet no less clever. Once again, there was no denying either theatricality or progress to something beyond the stage, something a more confident age would have called ‘absolute music’. The final variation burst forth like a cross between Bach family Quodlibet and symphonic finale—which, after all, is more or less what it is, or can be. 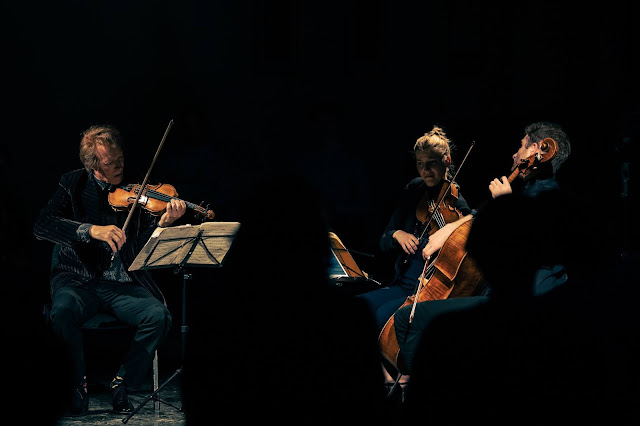 The second minuet offered due balance and contrast to its predecessor. With all the ingenuity and still more of the fun of one of Mozart’s contemporaneous orchestral dances, it permitted trios both to relax and to intensify, as is their performing destiny. What invention lies here in the text; invention lay in its characterisation too. The finale’s knife-edge mixture of (mock?) innocence and puppyish exuberance proved both contrast and complement, two sides to one of Mozart’s most extraordinary coins. Mercurial magic led us through a garden of delights to a miracle of invertible counterpoint to match the Jupiter’s, albeit cunningly not as climax. Mozart surprises with the expected and the unexpected.
Posted by Mark Berry at 6:47 pm