St John's, Waterloo
Schubert: Quartettsatz, D 703
Bartók: String Quartet no.3, Sz. 85
Mozart: String Quartet no.23 in F major, KV 590
Alex Redington, Ying Xue (violins)
Hélène Clément (viola)
John Myerscough (cello)
With such a programme, one might have been back at the Wigmore Hall. Indeed, many are already. It is a hallmark of Anthony Friend’s achievement in his Spotlight Chamber Concerts that all combinations of artists and programme I have heard might readily have taken place in London’s—many would say the world’s—finest chamber music venue. This evening was the turn of the Doric String Quartet, in Schubert, Bartók, and Mozart.


Schubert’s Quartettsatz is a popular recital-opener the world over. However many times one has heard it, it seems always to retain its allure and fascination. This was an unusual performance, unlike any I can recall, a frozen opening thawing somewhat, yet never to the extent of sounding what we might call ‘traditional’, let alone ‘Viennese’. If the tonal palette were somewhat restricted, there were great contrasts nonetheless to be heard within its selected constraints. There was much pent-up fury, so it seemed: a performance, perhaps, for our times. If I cannot imagine always wanting to hear Schubert like this, it was certainly preferable to lazy Gemütlichkeit.


Was that relative astringency in some sense preparation for Bartók? Not really, for it was quite rightly a very different world we entered with his Third Quartet: a different kind of ice, a different kind of febrility. Process stood more closely to the fore: doubtless a reflection of the work itself, but also of the performance. The palette here was broader, both in tone and dynamic contrasts. The players showed a keen collective—and individual—ear for detail and its place in the greater whole. If sometimes one felt on the brink of chaos, there was no doubt this was an organised chaos, drama lying in the shards of light, the cracks between notes, as much as in Bartók’s well-nigh Mozartian profusion of melody and, crucially, its relationship to harmony. Syncopation and other rhythmic devices propelled that drama, but never alone. 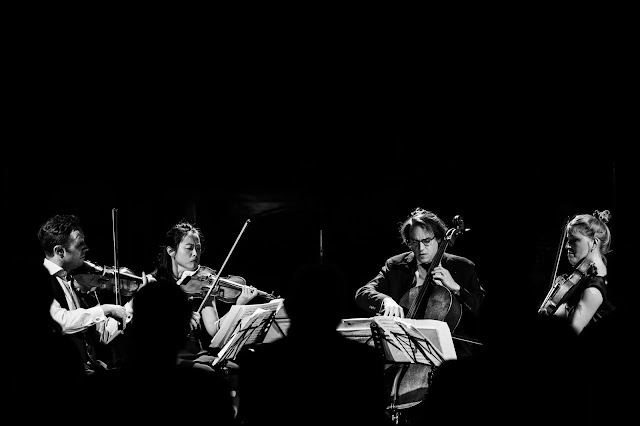 I often missed that relationship between melody and harmony and the consequent harmonic motion that creates dynamic form in the performance of Mozart’s late F major Quartet, KV 590. Clearly the Doric players hear Mozart differently from me, their favoured light, silvery, broadly ‘period’ tone—post-Harnoncourt, one might call it—very different from my ideal (or default). That, however, is no bad thing; one should always be prepared to examine and re-examine one’s preconceptions and prejudices. Their approach is in any case far from dogmatic: there was strikingly warmer playing from all concerned too. It was more what I heard sometimes as a strange lack of direction that puzzled. That said, there was much to admire in each movement: the first a model of conversational playing; the second swift yet intriguingly chaste, enigmatic, even introverted. The third offered splendid emotional intensification in its trio, whilst the fourth was full of incident in its almost helter-skelter progress. I never heard it smile, though. The lack, moreover, of an identifiable—to me—pulse had the music sound increasingly listless. For me, this was quixotic Mozart, but it drew me in to listen, above all in the intensity of passages taken sotto voce. It also had me think.
Posted by Mark Berry at 8:55 pm