Perhaps the most perfectly proportioned of Janáček’s operas, certainly one of the most emotionally and dramaturgically correct—which, in Janáček’s case, is saying quite something—Katya Kabanova has not wanted for recent performances in Britain. That is no cause for complaint, quite the contrary. That Janáček’s operas are still not at the heart of every major opera house’s repertory says nothing about the operas and, alas, a great deal about our houses and some of their audiences. Concert performances are less common: these are very much works for the stage. This current project from the London Symphony Orchestra and Simon Rattle to present a number of his operas in concert—I assume it is not all, though should be delighted if it were—is most welcome, not only for introducing new audiences to these fine operas, not only for affording the LSO (and Rattle) the chance to perform them, but also for giving us the opportunity to hear their orchestral writing in all its detail and power, such as might in part be lost when played in the pit.

Rattle certainly seemed to have conceived his reading with this in mind. It is doubtless fruitless to speculate, but I suspect some of the more extreme passages, whether with respect to dynamic contrast or tempo (at the slower end), would have been less so in the theatre. The LSO and an excellentcast responded in kind. Indeed, the glowing, dare I say Central European, tone of the opening bars promised—a promise finely delivered—a performance in which the orchestra was at least as much changed by its encounter with the score as vice versa. Doubtless, Rattle’s work with the Czech Philharmonic contributed to what we heard, but this was a Rattle rethinking at its best, nothing taken for granted, the fury of the later orchestral response again taking one by surprise, yet firmly in the spirit of composer and work. Where later I might have expected the full orchestra to sound a little cramped by the Barbican acoustic, that was not at all to be the case; in the absence of a new London concert hall, killed by Theresa May alongside so many of our hopes, conductor and orchestra have found new ways of living with it. 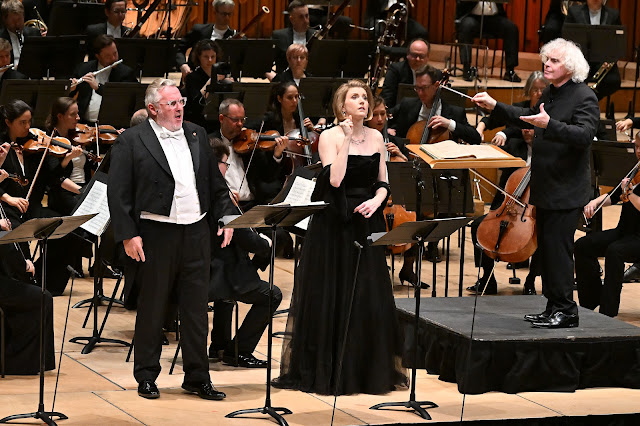 Climaxes were built and tended, singers included too—no one more so than Amanda Majeski in the title role. Her vocal line and all too clearly Katya’s hopes soared, preparing for a fall, when in the first act she sang to Varvara of her childhood imagination of angels flying heavenwards, continuing prophetically of the sin that threatened her. Likewise in the next act, when she resolved to see Boris and thus fully to set her tragedy in motion. A lack of stage business made such passages more conversational: perhaps neither for good nor ill, but rather just how it was. All the while, Rattle and the orchestra brought out telling detail without having it overwhelm greater line, musical and narrative. What intrigued me—I am not sure I can put my finger on why—was that this Katya seemed less saintly, more intent on pursuing her own happiness, more relatable perhaps, if less of a quasi-religious example. Given her fate, why after all should she present an example? 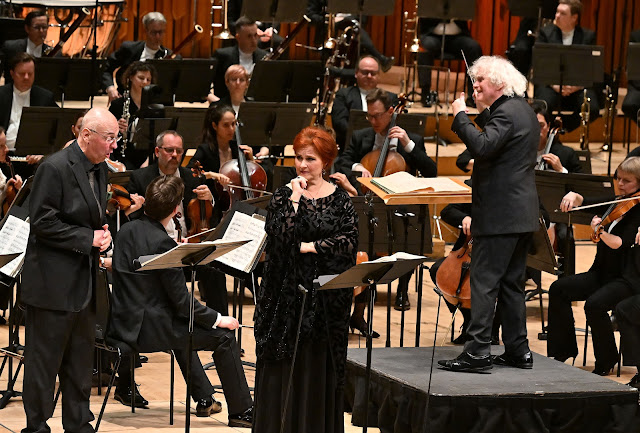 Much could be read from Majeski’s face too; as it could from that of Andrew Staples as her husband Tichon. He felt shame, as did his voice, yet still he did what his mother said. Katarina Dalayman’s Kabanicha was no mere caricature; if hardly sympathetic, perhaps she embodied a more comprehensible than usual desire for order in a community she saw threatened, rightly or wrongly, with breakdown. Her relationship with Pavlo Hunka’s sharply characterised Dikoj was likewise less caricatured than would often be the case, perhaps not merely a case of jaw-dropping hypocrisy. Simon O’Neill’s Boris was intelligently conceived, often ardent. There was likewise plenty of intelligence, and a wonderful animating spark, to Magdalena Kožená’s Varvara. She seemed veritably to brin Ladislav Elgr’s Kudrjáš to life, his second-act song delivered with verve and no little charm, Rattle splendidly highlighting the pizzicato accompaniment to help bring it to life. Claire Barnett-Jones and Lukáš Zeman both impressed in their smaller roles, making much of them in collaboration with their fellow artists. I look forward to hearing more from the latter, a new voice to me. 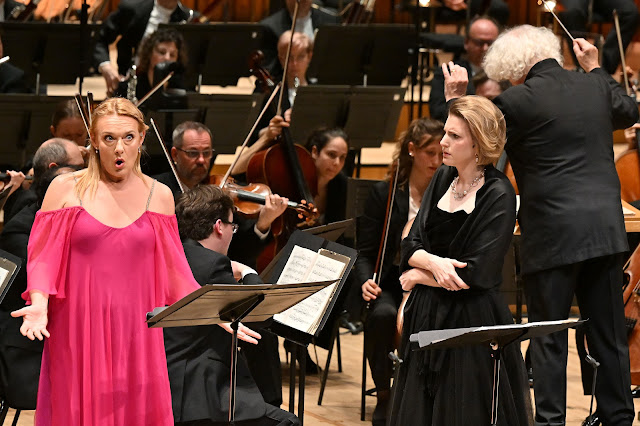 And yet, this was above all an orchestral drama. The poignancy of the brief, all-too-brief, Puccini-plus afterglow to the second act, eliciting a sadness quite different from anything one might hear in Puccini, offered another splendid, affecting example. Likewise, tellingly, the sheer strangeness of the early storm music of the third, especially from the LSO woodwind. If there were times, slightly to my surprise, when I found myself missing the completion of action that would have been achieved by a staged production—Janáček leaves much to that crucial pillar of operatic experience, knowing not only what to write but also what not to write—this was a compelling evening. If some listeners might have felt Rattle’s more spacious tempi went to far at times, for me they worked well in context. There seemed little doubt they had the assent of orchestra and cast alike.