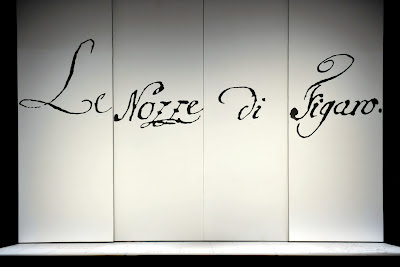 Jean-Claude Auvray’s production of The Marriage of Figaro for the Royal College of Music would doubtless generally be described as ‘traditional’, indeed traditional with a vengeance. Costumes are eighteenth-century, wigs, breeches and all; modest sets evoke the settings one would expect. There is nothing especially wrong with that; indeed, there is a great deal to be said for an eighteenth-century Figaro, unless one is to go in for the dangerous yet extraordinarily successful wholesale reimagining of Claus Guth’s Salzburg production. Half-hearted ‘updatings’ tend to miss out the intricate drama of social order and its upheaval without putting anything in its place. (David McVicar’s irritating Covent Garden production tries to mask the pointless vacuity of its updating to the Restoration period – why? it never even begins to explain – by inventing a huge amount of unnecessary stage ‘business’, most unforgivably, almost deafeningly, during the Overture.) The droit de seigneur is of course an exaggeration, to put it mildly, even when dealing with Spain, but it rarely makes any sense translated, unless real work is put in to render a new context meaningful.


And yet, Auvray’s production seems uninterested in anything but costume and a little gentle ‘humour’,
unaccountably deemed sidesplitting by sections of the audience, but then the threshold for such things in opera houses seems to grow lower almost daily. Of social tension there is not a glimmer. It is all just an opportunity to look pretty, a grievous underselling of Mozart and Da Ponte, as if they were purveyors of crowd-pleasing ‘costume drama’. In such a context, the lengthy period of silence at the beginning of the fourth act, whilst Barbarina finds her bearings, seems quite out of place. Bizarrely – lest we forget? – a major component of the set is a screen that opened and closed displaying, in Mozart’s writing, the words Le nozze di Figaro. It is difficult to imagine anyone would have thought these were designs for Lulu or Donnerstag aus Licht. I can certainly appreciate the use in a music college opera school of an opportunity for young singers to deal with the paraphernalia of a ‘traditional’ production – actually, I think it is nothing of the sort: Jean-Pierre Ponnelle’s Figaro exhibited plenty of tension between social orders – but it is a pity that the ‘period’ setting could not on this occasion permit of something approaching an idea or two. Perhaps, nevertheless, the lessons learned will at some point be put to good use in Novosibirsk or Kettering, or wherever else it is that other people still direct Figaro in such a manner.

The principal object, however, of such performances is to permit young singers to perform – and in major as well as ‘minor’ roles. I think I am best passing over as quickly as possible the evening’s Countess, save to say that I can only assume her to have been ill. Other than her and a rather dull-voiced Bartolo, there was a great deal to enjoy vocally, especially when led to think how these voices might develop within but a few years. I was particularly taken, as was my companion, with Emilie Renard’s Cherubino, in many respects offering as complete an assumption of the role as one would expect on a ‘major’ stage. The tricky business of convincingly behaving – not just dressing – for a trouser role, still more so when it involves the character dressing as a girl, was navigated with aplomb, the requisite slight but winning awkwardness surely indicative of future success as an Octavian. Otherwise, Bradley Travis and Filipa van Eck were perhaps the pick of the bunch, with bright, fresh, and especially in Travis’s case, often moving portrayals of Figaro and Susanna. Both can act; both can sing; both can combine the two. Figaro’s often overlooked fourth-act aria was an especial joy. Morgan Pearse’s Count offered impressive competition to his valet, always well sung, with a depth and focus of tone unusual amongst singers of his age. Vasili Karpiak’s Basilio was an intelligent, often finely-drawn, portrayal, considerably more subtle than the caricatures one often encounters. Bragi Jonssón's Antonio made a fine impression in terms of voice and stagecraft. Hannah Sandison’s brightly-sung Marcellina also merits special mention. As ever, it was a pity that she lost her fourth-act aria. (Just what is it that conductors and/or directors have against it?) Even the two bridesmaids, Harriet Jones and Stephanie Jennings-Adams, brought a little vocal sparkle to their tiny roles. The Italian language was generally handled well, though not all of the cast have yet acquired the ability to make the language work dramatically in secco recitatives. (To be fair, one might say the same of a good few rather more celebrated singers too.)

Bar the odd mishap – most unfortunately in ‘Non so più’ – the Royal College of Music Opera Orchestra played very well indeed, full of live, vigour, and magic. Hearing a reasonably-sized band – eight first violins downwards – for the size of the theatre was a rare treat; far too often one ends up with an orchestra of similar size in the likes of the Royal Opera House, where it simply sounds distant and underpowered. Here, in the RCM’s wonderful Britten Theatre, we benefited from true immediacy and, at times, weight of sound. Michael Rosewell for the most part kept the action moving well enough, not without doses of the the unduly hard-driven yet more often than not without excessive haste. However, his reading suffered notably from apparent inability, or at least unwillingness, to shape the acts as convincing wholes; numbers, including recitatives, tended simply to come to an end, their successors following on after unnecessary pauses. (That only encouraged an often poorly-behaved, chattering audience to applaud – not least during an unfortunate pause within the second-act finale.) There were, moreover, a few too many instances of disconnection between stage and pit, which might have been better covered from the latter.