Looking forward to Parsifal at Bayreuth (I) 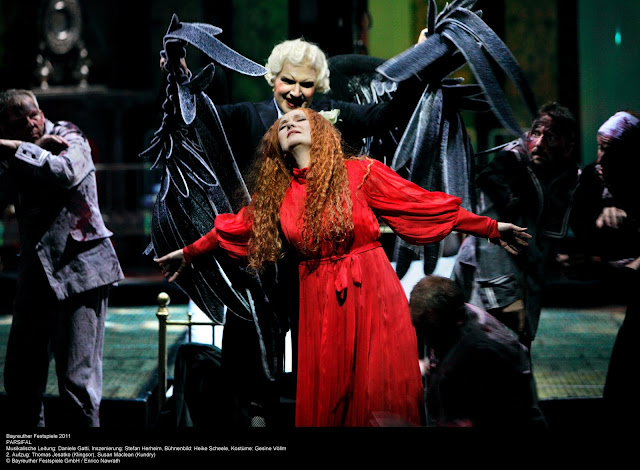 There are many reasons, of course, for me to look forward to Parsifal at Bayreuth this summer, not least amongst which would be the simple matter of it being Parsifal at Bayreuth. I recall reading William Mann saying somewhere that he had never heard a bad Parsifal there; nor had he ever heard a good one anywhere else. I have certainly heard considerably-better-than-good performances elsewhere, notably from Bernard Haitink at Covent Garden and from Daniel Barenboim in Berlin, though it has to be said, with the greatest regret, that both of those stagings conductors and audience suffered were truly execrable. Nevertheless, nothing will ever sound quite the same as the strains of the first-act Prelude emerging from the covered pit in the theatre whose specific acoustic Wagner had in mind when writing the work. It should never have been confined to Bayreuth, of course, but that is not to deny the very special status the Festspielhaus will always have with respect to this particular drama.

There is more to it than that, however. Sadly, Daniele Gatti will not be conducting this year, as he has on previous outings of this production, including 2008 and 2011, when I was fortunate enough to be present. Gatti's grasp of the score, his ability to present it in one breath, ranks with the great Wagner conductors I mentioned above. The principal reason this Parsifal has become so celebrated, venerated even, however is Stefan Herheim's production, which will receive its final staging this year. (And contrary to the Festival's initial, capricious decision, it will now be filmed for release on DVD.) I have written about it before, and the reader may follow the links above to my thoughts in 2008 and 2011, but suffice it to say here that there has never been a production to which I have so looked forward seeing for a second, let alone a third, time, and never can I recall an occasion on which that expectation has so richly been rewarded. The extraordinary tight-rope Herheim walks between telling the story of Parsifal, as in Wagner's work itself, and telling the story, or at least a story, of Parsifal, as in its after-life and that of the culture in which it was born and to which it contributed would be reason enough to honour the staging. Still more extraordinary, however, is the way that the two stories - I am simplifying, for there are many more stories at work here too - fuse, complement, contradict, emerge stronger and more meaningful; that is, they work in very much the same way Wagner's own compositional technique.

For, as I never tire of saying, most of the truly noteworthy opera productions come from musicians, those who not only can but those who actually do read the score. (It strikes me as almost incredible that one would have the nerve to stage an opera if one could not, but let us leave that issue for another day.) Ultimately, redemption in this production comes, as it must, through the music. That is Herheim's message, or one of them, and it is Wagner's message, or one of them. Moreover, it is possible some of what one gleans may not even have been intended, by Wagner, by Gatti, by Herheim, by anyone else involved; that openness is also the hallmark of an art that is developmental, not circumscribed. One may or may not like the results - I do, greatly - but sadly, a characteristic of negative reviews of this production, which have largely hailed from all too predictable quarters, whether personally or geographically, has been a signal lack of comprehension and, in many cases, an unwillingness even to try to comprehend, to make any effort to think. Nothing could be less worthy of Wagner and his 'emotionalisation of the intellect' than that. I have said it before, and doubtless, I regret, have to say it again: 'emotionalisation' (Gefühlswerdung, or 'becoming feeling') is not abdication. Indeed, it is anything but abdication, a standing rebuke to those content to let whatever it is they experience merely wash over them. (Nietzsche called them 'Wagnerians'.) Wagner's vision, rather, embodies active, transformational development of the intellect; it is dynamic, provocative, above all dialectical. Both feeling and intellect are, as it were, aufgehoben, proof if ever it were needed that Wagner never abandoned Hegel, even if he thought he had.
Posted by Mark Berry at 12:40 am