An apt metaphor for and precursor to Monsalvat? 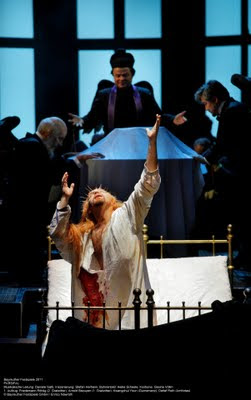 Our hearts are thrilled with compassion, for it is old Jehovah himself who is making ready to die. We have known him so well, from his cradle in Egypt … We saw him bid farewell to those companions of his childhood, the obelisks and sphinxes of the Nile, to become a little god-king in Palestine to a poor nation of shepherds … We saw him move to Rome … he obtained power and, from the heights of the Capitol, ruled the city and the world, urbem et orbem. … We have seen him purify himself, spiritualise himself still more, become paternal, compassionate, the benefactor of the human race, a philanthropist … But nothing can save him!
Do you not hear the bell? Down on your knees! The sacrament is being administered to a dying God!

I do not believe in God, but in godliness, which is revealed in a Jesus without sin.

Much about church and state; he says, 'For me Christianity has not yet arrived, and I am like the early Christians, awaiting Christ’s return.' – But in the search for ideality, he adds, things look different!


After breakfast he talks about philosophy and says that Kant found something eternal in his quiet avenue in Königsberg, an ideality of time and space, like Jesus in Galilee: 'My Kingdom is not of this world.'

Perhaps that points us to an answer, perhaps not; yet, in a sense, it merely rephrases the question, which may be another reason we need Parsifal, in which such issues are dramatised rather than 'resolved'...
Posted by Mark Berry at 5:08 pm