Beethoven and Boulez have a great deal in common, but even more that dialectically relates them, without necessarily betokening common ground. The most obvious example, arguably, would be the deconstructive kinship between the Hammerklavier Sonata and Boulez’s Second Piano Sonata. Whatever one might think of the claim that, thereafter, sonata form had been destroyed – I am not unsympathetic, albeit willing to admit of intriguing exceptions – it is certainly the case that Beethoven’s example permitted such a claim and, more to the point, that it inspired the restless formal experimentation which, via Schumann, Liszt, Wagner, Debussy, Webern, et al., has both become expected of composers and inescapably linked, whether in emulation of or rebellion towards, Ravel’s grand sourd. A Beethoven cycle from the West-Eastern Divan Orchestra and Daniel Barenboim would be an event, no matter what; interspersed with works by Boulez, the prospect somehow advances even beyond the red-letter day. Beethoven found himself lumbered with pointless projections of his brooding if blurred image beneath the choir; Boulez was spared that indignity. 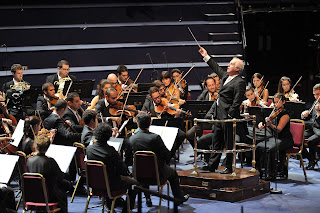 Barenboim elected to perform Beethoven’s First Symphony with what, for him, or at least for my expectations of him, was a relatively small orchestra: only four double basses, to give an impression. Nevetherless, the expectancy of the first movement’s introduction was in no way hampered by that; nor was the cultivation of the WEDO’s string sound. Would that more European orchestras, let alone others, could sound so at home with Beethoven. The exposition was taken relatively swiftly, again confounding or at least calling into question (my) expectations, without sounding in the slightest hard-driven. Finely articulated throughout and always impeccably goal-oriented – if ever one needed a single adjective for Beethoven it should surely be that – the reading was perhaps slightly more Haydnesque in spirit than I might have expected, certainly more so than Barenboim’s recording with the Staatskapelle Berlin. (It will be interesting to compare that with his recent WEDO recording.) I have wondered from time to time why Barenboim has not performed more Haydn; this performance suggested in no uncertain terms that he should, Haydn needsing advocates almost as much as Schoenberg, for whose cause Barenboim has offered unwavering support. Anyway, back to Beethoven. The line of his work was unbroken throughout, which should go without saying, but which is sadly a cause for jubilation, astonishment even, in an age of pseudo-‘authenticity’. There was development in the development section - a rarer thing than one might expect - and the coda acted as it should, aspiring towards the status of a second development. Further testament towards Barenboim’s rethinking was the almost courtly quality characterising the slow movement, adorable in its post-Mozartian poise and beauty. There were, of course, sterner responses, where Haydn’s shadow, not least from trumpets and drums, loomed larger, but the abiding memory remained that of the opening. The scherzo as so often proved perhaps the most unambiguously Beethovenian movement, peering at least as far into the future as the Seventh Symphony. Its propulsion was all the more impressive given that Barenboim did not mistake tempo for driving too hard. I do not recall ever having heard more delectable woodwind – well, save from the Vienna Philharmonic – in a trio that really stopped one’s heartbeat. Expectancy was once more the hallmark of the finale’s introduction, yet it led well-nigh perfectly, without undue portentousness, into the exposition proper. Weight emerged from within the music rather than being applied to it. The spirit of Beethoven was here, no doubt: what humanity, what life force emanating not only from every note but from its connection with every other. That, surely, is a fitting metaphor for the work of this miraculous orchestra. (Armchair nay-sayers know what they can do.) 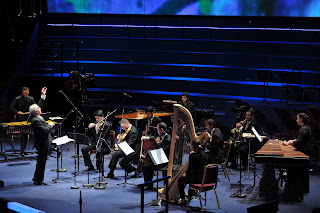 The last time I had heard Dérive 2 had been under the direction of the composer himself, in aconcert of Boulez and Carter to mark the latter’s hundred birthday. Rather to my surprise, I found myself more readily, indeed rapturously, responding to Barenboim’s performance. How much was a matter of the context, it is difficult to say, but thoughts concerning Boulez’s often overlooked relationship towards Beethoven surfaced and informed my reaction. (Anyone wishing to sample Boulez’s Beethovenian credentials should listen to his excellent recording of the Fifth Symphony, praised to the skies by no less a musician than Sviatoslav Richter, yet never released on CD. I live in hope that some day Boulez’s Proms performance of the Missa Solemnis will be made available to hear.) Bar the coughing and an often fidgety audience – at least it did not applaud in the middle of the work, as it had during the Beethoven – I was more or less immediately reminded how, almost but not quite paradoxically, the problematical acoustic of the Royal Albert Hall will often favour chamber or ensemble pieces to all but the largest-scale symphonic works. One is drawn in rather than alienated. Barenboim’s performance pulsated with life, a tribute to the efforts of his WEDO musicians, whether Michael Barenboim on violin, whose contributions varied between Soldier’s Tale-like Stravinskian echoes to fully-fledged soaring lyricism, his string section companions, Ori Kam and Kyril Zlotnikov, about whom much the same might be said, joyful tuned percussion brought to us antiphonally by Dominic Oelze and Noya Schleien, or the almost jazzy (Ebony Concerto or Bartók’s Contrasts?) clarinet-playing of Jussef Eisa. I could and probably should have gone on to name every soloist, each one a virtuoso, a protagonist, and above all a musician. Boulez’s harmonies were relished without being milked, the hallmark of a fine post-Debussy musician, whether as conductor or composer. Purpose, which if not exactly Beethovenian, might conceivably be considered inspired or at least possessing kinship, was indelibly present throughout the three-quarters of an hour of this challengingly extended score. (Its first version was considerably shorter.) The sheer catchiness of some of the melodic threads should not but doubtless would have surprised some; let us hope that this example will send many running to other masterpieces from the Boulez canon. Perpetual transformation, the examples of Liszt and Wagner especially evident, brought to mind other instances within Boulez’s œuvres – the orchestral Notations, for instance – and operated as a highly dramatic force. As for the final unison: what a master-stroke!


Beethoven’s Second Symphony opened with duly imposing chords, responded to in melting – dare I say ‘feminine’, courting the gendered response of Susan McClary? – fashion. There was an apt sense of a tonal world ripe for exploration. Arrival and departure were signalled by the onset of the first movement exposition. Tension never let up, a quality that went hand in hand with a sense of spaciousness that occasionally recalled to me the Beethoven of Sir Colin Davis. The eruption of the coda stood unmistakeably in Furtwänglerian lineage. Wamth, soulfulness, and above all command of line characterised the slow movement. Rhetoric was integrated into the hole and all the more powerful for it; I could not help but contrast Barenboim’s performance with the hapless, almost bizarre, lack of harmonic rhythm one hears when Nikolaus Harnoncourt, far from the worst of his ilk, attacks Beethoven. The movement flowed – I suspect that it was taken relatively swiftly, though have no timings to back that up – yet by the same token effortlessly took its time, emphasising its Romantic scale. There was, moreover, a fine sense of chamber music writ large, a homage to the Classical divertimento. The scherzo again was unmistakeably from Beethoven’s stable, in concision, tension, and downright explosive quality. The dialectical struggle of the trio – vulgarly, between the delectable woodwind material and the whirlwind vortex of Romantic strings – would surely have come close to satisfying Adorno, or at least Hegel. I love Michael Gielen’s bracingly modernist way with the finale, but Barenboim’s old-world narrative wanted little in drama. Moreover, his Haydnesque approach of string figuration paid analytical as well as characterful dividends. I was left marvelling not only at the remarkably deep German sound Barenboim could draw from his orchestra but, more importantly still, at the staggering originality, whatever Beethoven’s roots, of his symphonic writing. Roll on the next concert.