This second instalment of the Beethoven symphonies from Daniel Barenboim and the West-Eastern Divan Orchestra reversed the chronological order, so that the Fourth was to be heard in the first half, along with Boulez’s Dialogue de l’ombre double, with the second half given over to the Eroica. Fair enough, one might say, the latter symphony being an obvious work with which to conclude the programme. I wondered whether it might therefore have made sense to mix up the programming a little more, rather than to present an almost-but-not-quite chronology, but any ordering will possess its particular advantages. As it was, even though the Fourth came first, I could not help but hear it to a certain degree in the light of what was yet to come. 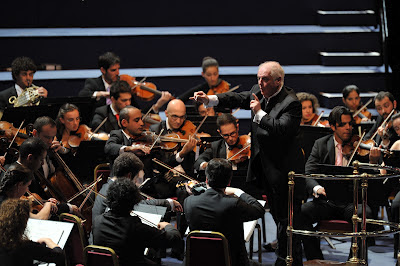 Its first-movement introduction sounded deliciously dark, spacious, mysteriously flowing in a fashion that almost inevitably brought Barenboim’s hero, Furtwängler to mind. Zum Raum wird hier die Zeit? The transition was thrillingly navigated to a spruce, well-articulated, yet dramatically charged exposition. Six double basses marked a larger orchestra than that employed for the First and Second Symphonies (with four), but somehow there was already a sense of slight scaling down from the Eroica we had not yet heard; and so it would come to pass, with eight players after the interval. There was an occasional slight thinness to the WEDO’s string tone, not simply to be ascribed to numbers or the acoustic, and especially if one had in the back of one’s mind Barenboim’s recording with the Staatskapelle Berlin, but for the most part this was cultured, cultivated playing. More important was an ever-present sense of teleology, without which Beethoven makes no sense whatsoever. Equally crucial, indeed indissolubly interlinked, were rhythmic propulsion and the concision that is such a hallmark of this symphony and this movement in particular. There was an abiding sense of the processional – ghosts of the French Revolution? – to the slow movement, woodwind rightly to the fore. What a joy it was to hear again after the years of ‘authenticke’ terror a Beethoven in which the metronome played no part; music in the sense of score and performance progressed according to its own requirements and possibilities. It was as free and goal-oriented as one might expect from Barenboim in one of the piano sonatas. Other ghosts – the Eroica, late Haydn – haunted the sterner moments; humanity and the present always won through, with woodwind playing of truly heart-stopping beauty. The scherzo sounded as a successor to the funeral games of its Eroica counterpart: athletic, heroic, what the Olympics might be, were their vile commercialism to be jettisoned. There was a ‘traditional’ slowing for the trio, rightly pointing to its premonitory kinship with the Seventh. The finale was certainly swift, but also graceful, Haydn’s example far from banished – and why should it be? By turns lithe and muscular, this exuded vitality.

Boulez’s Dialogue de l’ombre double, performed by Jussef Eisa with IRCAM design from lbert Nouno and sound engineering from Jérémie Henrot, received a revelatory performance: an achievement from any musician, let alone a clarinettist so young. The Royal Albert Hall came into its own here, the ‘double shadow’ enveloping the audience – amongst whom, there were, sadly, a few disruptive influences – and evoking all manner of historical resonances from plainsong versicle and response in a great basilica to Boulez’s own Répons. The relationship between ‘original’ and electronic sound was by turn blurred and rendered clear, intelligent lighting adding a helpful visual element. Truly magical passages of transition between strophes provided some of the many highlights. Eisa – and Boulez! – offered arabesques of ravishing beauty, delivered with a virtuosity that would surely have impressed Berio, to whom the score is dedicated, though here the virtuosity tends towards a more gentle kind than is essayed in the Sequenzas. I was also put in mind of Nono’s Venetian evocations, whilst the spatial movement of electronic sounds, at some points almost dizzyingly fairground-like, sounded as if transformed Gabrieli or Monteverdi. This was a remarkable performance of a remarkable work, which survived coughing, sneezing, chattering, even the man next to me who insisted on eating his sandwiches.


The first movement of the Eroica took a little while to get into its stride, the only (relative) disappointment to the concert. Accents, surprisingly for Barenboim, sounded a little over-emphasised, more akin to the artificial ‘excitement’ lesser musicians impose upon Beethoven. Counterpoint, however, was clear and harmonically propulsive, and momentary apparent desertion from Furtwängler’s path was put right with yearning voicing – and working – of the second subject. The magic tended to be reserved for hushed moments, at least until echt-Beethovenian defiance was voiced in the recapitulation. Gloriously apparent was the status of the coda as second development – perhaps a link, despite the formal perfection of Beethoven’s scheme, to the open-endedness integral to Boulez’s æsthetic. Klemperer, hewn from granite, remains the model for so many of us in the Funeral March, but Barenboim’s more fluid approach more than justified itself. There was some especially fine playing from the WEDO’s woodwind principals. The episodes unabashedly evoked Furtwängler, not just in their shaping but in their organic growth from existing material. Nobility of utterance verged upon the supreme. This was Wagnerian Beethoven, and all the better for it; several times I heard intimations of Die Walküre. Wagner’s 1851 programmmatic explanation of this symphony came to mind:


... the term ‘heroic’ must be taken in the widest sense, and not simply as relating to a military hero. If we understand ‘hero’ to mean, above all, the whole, complete man, in possession of all purely human feelings — love, pain, and strength — at their richest and most intense, we shall comprehend the correct object, as conveyed to us by the artist in the speaking, moving tones of his work. The artistic space of this work is occupied by … feelings of a strong, fully formed individuality, to which nothing human is strange, and which contains within itself everything that is truly human.


I wonder whether I heard the scherzo differently, following that of the Fourth. At any rate, Beethoven’s life-force was wonderfully apparent. The Romantic grandeur of those horns announcing the trio acted as a reminder that Der Freischütz is not so very far away. Beethoven’s finale followed on with truly musico-dramatic inevitability, as did each variation from its predecessor. Beethoven cannot be given with cynicism, yet our own, cynical age needs him more than ever. I doubt that any musician today could square that circle as well as Barenboim. The very existence of the West-Eastern Divan Orchestra stands as testament to that.