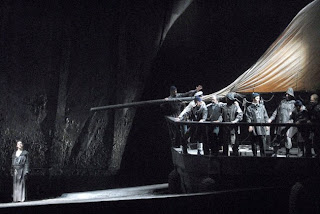 It has always, in my experience, been a joy to hear the Staatskapelle Dresden, and my experience received no jolt upon this occasion. Ranking of orchestras, though it seems recently to have become strangely fashionable, is as absurd and objectionable as any other form of ‘league table’. Nevertheless, if the proverbial gun were held to my head, I should doubtless maintain the Vienna Philharmonic Orchestra to be well nigh sui generis and suspect that I should opt for Dresden at the head of the rest. Why? Both have maintained not only their greatness but their individuality in the face of increasing homogenisation of the world’s leading orchestras. Vienna has always been a law unto itself but the Dresden orchestra, rather like its counterpart in Berlin, and unlike the Berlin Philharmonic, was shielded to some extent by the Iron Curtain. The maintenance of an ‘old German’ sound, not inflexibly so but with due regard to the tradition of the repertoire which will most likely always stand at its core, is something of which to be deeply proud and with which the listener can hardly fail to fall in love. Perhaps midway between the Vienna Philharmonic and the Staatskapelle Berlin, the Dresden orchestra may be said to marry the golden tone of the former with the latter’s darker hints of mahogany. Here, the strings sounded ineffably golden, the woodwind overflowing with almost Viennese character; the horns might readily have come freshly minted from the Böhmer Wald of Der Freischütz. It was this orchestra that played for the first performance of The Flying Dutchman; it has this music, like that of Weber and Strauss, in its blood. That does not guarantee a good performance but it is worth more than any present day misconceptions of ‘authentic performance practice’.

Sadly, whilst Christof Prick’s conducting could not rob the orchestra of its sound, his direction had little else to recommend it, remaining Kapellmeister-ish in the extreme. Almost unremittingly foursquare – one could hear the beats all too clearly – Prick was either unable or unwilling to admit of any transitions, let alone tempo variations. The Dutchman was reduced to a succession of numbers: not, it seemed, as it had under Marc Albrecht at Covent Garden, owing to a questionable interpretative decision, but simply by default. And how it dragged! I thought the second act was never going to end. In a superior performance, it would not have done, but on account of a very different reason. For another unfortunate aspect of this production was the decision to perform the three-act version of the work. I had forgotten quite how regrettable this sounds once one has become accustomed to the single-act version. Whilst I am well aware that, largely for practical reasons, Wagner gave the Dresden premiere in three acts, this was not how he had conceived it and, more importantly, it helps neither the narrative nor the musical flow, assuming there to be one in the first place. Moreover, Wagner’s 1852 and 1860 revisions, whilst interesting musically, need a strong production to make them sound anything more than tacked on dramatically. This is, I think, a very different case from the Paris Tannhäuser.

Wolfgang Wagner’s venerable production did not prove to be up to that particular task. It must have seemed old-fashioned in 1988, when it was first given, not least in the light of work by directors such as Harry Kupfer; now it seemed in definite need of replacement. Some of its more old-fashioned aspects were not unwelcome, especially when one considers what can go awry when baby, bathwater, and all are modishly cast into the North Sea. To see two credible ships, costumes that did not distract, a chest of gold to attract Daland, and a portrait of the Dutchman to attract Daland’s daughter: this was all very welcome after Tim Albery’s dreadful production for the Royal Opera, which had rejected such representative inconveniences without deigning to put anything in their place. The lighting was well handled without being unduly flashy. Wolfgang wrote intelligently in the programme about the notion of ‘hope’ being central to the work and about the ‘Romantic’ polarities of the real and unreal, the theatrically possible and impossible, even the Aufhebung of time and space. Yet there was precious little sign of these ideas being explored on stage, even if there once had been. I do not know how long it has been since Wagner’s grandson actually took a hand in this production but I should wager that it has been quite a while. Heike Maria Jenor and Bernd Gierke were credited with Abendspielleitung and Regieassistenz respectively; it is difficult to know what this meant in practice. For the most part, members of the cast looked largely as if they had been left to their own devices and the chorus was left floundering.

Alan Titus was the best of the soloists as the Dutchman. ‘Die Frist ist um,’ began rather uncertainly, particularly in term of intonation, but once Titus had settled down, he exhibited a commendably rich tone, which complemented the orchestra. Moreover, one could hear every word he sang. He was certainly preferable to Bryn Terfel at Covent Garden, who had far too often whispered or shouted – not that one would have known from many newspaper reports. Eva Johansson had her moments as Senta but her intonation could be alarmingly awry, a failing exacerbated by her habit of scooping up towards notes. She had the same permanent look of derangement that I noted on her DVD performance of the Walküre Brünnhilde from Aix. Senta might well be mad – much depends upon guidance from the production – but she needs something a little more individualised and a lot more in tune than this. Timothy Simpson substituted for an ailing Martin Homrich as Erik. Simpson started rather well, though he was not helped by Prick’s lifeless – which is not the same as slow – tempi. However, in the third act, Simpson began to sound tired, leading to an unfortunate near-collapse at the end of his part. Perhaps it was a matter of nerves. Sofi Lorentzen and Michael Eder made decent jobs of their roles as Daland and Mary, whilst Timothy Oliver was worthy of note as an accurate, attractively-voiced Steersman. The choral singing, as opposed to its movement, was generally of a high standard. Matthias Brauer clearly runs a tight ship in this respect. However, the glowing sound of the orchestra notwithstanding, there was too much that at best qualified as routine in this performance.
Posted by Mark Berry at 9:27 am