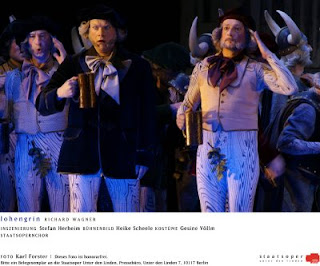 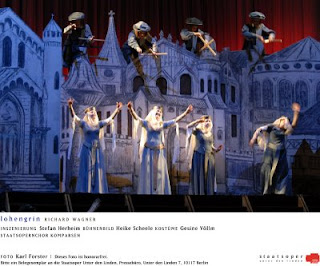 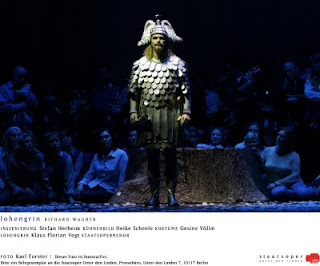 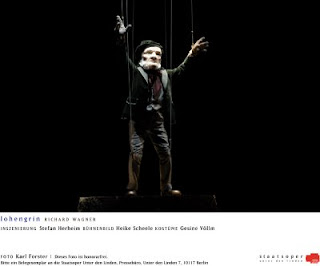 Stefan Herheim has triumphed again in Wagner, this production of Lohengrin proving a worthy successor to his Bayreuth Parsifal. Like the Parsifal, this is a multi-layered production, which would doubtless reveal further secrets upon further acquaintance. However, even upon a first viewing, an array of intricately interconnected ideas revealed themselves, whilst still – and this is perhaps the greater achievement – providing theatrical excitement, coherence, and engagement with the work, not least in its musical form. Unlike many of his directorial colleagues, Herheim is a musician – and it shows.

The Prelude to Act One, performed with magnificent luminosity by the Staatskapelle Berlin, depicts Richard Wagner both as puppet and puppeteer, an ambiguity to be revisited upon many of the characters. Apparently assumed into heaven, a similar fate – albeit with an all-important distinction – will be visited upon Lohengrin at the work’s conclusion. Wagner’s presence is seen on stage throughout the work, sometimes in multiple guises, whether as puppets or as chorus members – frockcoat, altdeutsch cap and all – and sometimes melding with other members of the depicted Volk, both changing them and being changed by them. Herheim’s treatment of the chorus is thought-provoking throughout, taking advantage of what can in lesser hands seem like rather stock responses to present a Volk dangerously swayed by the ministrations of a charismatic leader and dangerous through its responses thereto. Losing their individuality, as illustrated by their loss of individual modern dress, and subsumed into a bland yet fearsome force of social repression, rejoicing in an impossible, Magritte-styled Eden, followed by a make-believe world of horned helmets and other neo-mediævalisms. The German catastrophe is unmistakeably present. Heike Scheele’s Brabantian sets and Gesine Völlm’s costumes are here a splendid riposte to those who actually claim to wish to see the vacuously ‘traditional’, which is of course nothing of the sort. For Lohengrin, when he arrives, apparently straight from Neuschwanstein, is the menacingly kitsch instrument of transformation from an opera house in modern Berlin to a world of fantasy. Gleichschaltung is the name of the game, as it was once before under a seductive leader with nothing but emptiness for a core. We can read what we want into him and that is part of the problem. Like his creator, he will be assumed upwards but then, to seal the tragedy, will come crashing back down to earth.

Throughout, the exterior manifestations of theatrical craft remind us of the instrumentalisation at work. And at the end, we see Wagner’s own words, always disregarded by his would-be protectors – remember, Protector is also the title awarded by the king to Lohengrin in Brabant – ‘Kinder, macht neues!’ After the first production of the Ring, the composer urges his followers to do it quite differently the next time. But then, what did he know? He is used and abused at least as much by the community here as the other way round. Is it the visible theatrical apparatus that lets the hero and us down, or is it letting us in on a secret? There are no easy answers, which is just as it should be.

At the heart, yet curiously and rightly decentred, was Klaus Florian Vogt’s Lohengrin. This was a straightforwardly outstanding performance, following in the footsteps – at least in my listening experience – of his Erik and his Walther. Strength and beauty of tone are brought together in a marriage of heroic and lyric tenor. Has Vogt made a pact with the Devil? Might we at last have found a Siegfried? Moreover, there was something quite terrifying about the emptiness of his stage delivery, which, when married to such seductive means, brought us closer than many would doubtless have liked, to a profoundly serious confrontation both with ourselves and with our historical demons. Elsa was powerfully portrayed by Dorothea Röschmann, occasionally a little strained, but more usually with a tender, word-attentive lyricism. Her nobility was all the more moving – and credible – for being tarnished by her brush with charismatic power. Telramund and Ortrud, whilst far from being vindicated, are transformed by the production into rather more complex figures than often they will appear. In terms of performance, Gerd Grochowski was a Gunther-like figure, believable in his weakness but perhaps a little lacking in strength as a real alternative to Lohengrin. Michaela Schuster, on the other hand, was superb as an Ortrud driven mad or madder by the unfolding events, events which chillingly excluded her as an outsider. Her unhinged malevolence made no excuses but, as she spat her contempt, we at least began to question why. As a force of ‘traditional’ normality, Kwangchoul Youn provided a firm, noble foundation as King Henry, though we all know how swiftly charisma can sweep away traditional legitimacy; the uncertainty of his rule of law was terrifyingly apparent. And the Herald’s transformation from Berlin bear – the city’s symbol – to camp exhibitionist, tomorrow belonging to him, was perfectly captured by Arttu Kataja.

I mentioned Herheim’s virtuoso direction of the Volk-chorus. This would have amounted to little, had it not been for a superb performance from its members, very much back on form, as they had been in the previous night’s Ein deutsches Requiem. The Staatskapelle Berlin was on equally excellent form, this music playing to its ‘old German’ strengths, although Herheim’s production of course rightly problematises the very concept and reminds us of the orchestra’s modernity, including its fine record under Daniel Barenboim and others in contemporary music. Barenboim was perhaps not on quite the form to which Wagner can often bring him. There were a few shortcomings to his conducting, for instance, a conclusion to the first act in which he ran away with the orchestra, apparently leaving the chorus to fend for itself. But on the whole, the score was in sure hands, with a conductor who brought out not only the golden (Lohengrin-like?) string tone but equally a frightening vision of madness in the brass fanfares of the third act, in which orchestra, conductor, and director worked together to convey the terrors of totalitarian militarism, especially that with a benign face. Such is a powerful, if all too rare, example of how musical drama can and should work.
Posted by Mark Berry at 3:52 pm