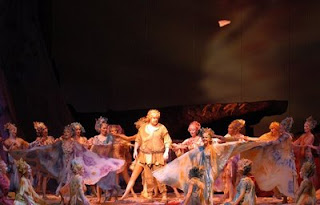 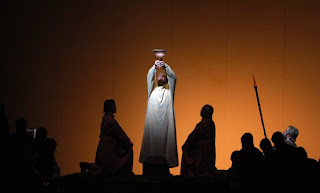 This was much better than the previous night’s Flying Dutchman. The performance made me realise that I should probably have been harsher concerning Christof Prick’s hapless conducting. Lothar Zagrosek’s direction was certainly the real thing, clearly born of a sophisticated understanding of the score and an ability to communicate that to his players. In general, this was a swift reading, which is not necessarily to say unprobing, but quite different from the broader conceptions of, say, Knappertsbusch or Goodall. To a certain extent Boulez sprang to mind, although the latter’s modernistic concerns were less to the fore than what sometimes sounded like an attempt to point to connections with Romantic symphonism. In any case, the focus was upon dramatic drive rather than the quasi-liturgical understanding that often informs the outer acts. Zagrosek’s conducting was certainly not inflexible; fluctuations in tempo were handled soundly. However, this was Wagner often sounding closer to Mendelssohn, Schumann, perhaps even Brahms, than to Bruckner, Mahler, or Schoenberg.

Greater weight was placed upon the Transformation Music and upon the choral sections, here superbly rendered by the assorted choruses, of whom the excellent children’s choir merits special mention. The work of Matthias Brauer and Ulrich Paetzholdt had clearly paid off. Likewise, the Staatskapelle Dresden was once again on splendid form. There may be no one ‘right’ sound for Wagner, but this orchestra is certainly one of the best equipped tonally for his music. The strings truly glowed, whilst the woodwind added piquant colour. At climactic moments, the brass made its presence felt without the slightest sense of Solti-like crudeness. The excellent timpanist’s role in dramatic punctuation was of the highest importance. There were a few instances of insecurity, such as a wrong entry from the woodwind immediately prior to Parsifal’s baptism of Kundry. For a worrying moment, it sounded as though the orchestra might have lost its way, but Zagrosek pulled his forces together.

1988 must have been a good year for Wagner in Dresden, since the Staatsoper premiered not only Wolfgang Wagner’s Dutchman but also Theo Adam’s Parsifal. In truth, neither production has a great deal to say to a contemporary audience, if indeed either did at the time. The prospect of an East German Parsifal was intriguing but there are no political statements here. What we have is a straightforward, uncontroversial telling of the story. Scenery and costumes are more or less as one would expect, with the partial exception of a peculiarly unattractive magic garden for Klingsor, likewise the strange, butterfly-like costumes for the Flowermaidens. As with Wolfgang Wagner’s Dutchman, we see pretty much everything we should. In this case, the Grail looks like the Grail and is elevated by Parsifal in the final scene. The spear looks like a spear and does what it should. The most fanatical adherent to Wagner’s stage directions might lament the lack of a dove at the end, but otherwise would have little with which to find fault. Parsifal does not himself make the sign of the Cross at the end of the second act but a Cross is revealed in the sky, thereby avoiding the nonsense that many productions suffer when he speaks of something that is merely disregarded. However, it was not at all clear what its presence meant, given the lack of any overt Christian or indeed anti-Christian reading of the work: probably better than disregard, but not preferable to dramatically underlined absence, as in Nikolaus Lehnhoff’s Waste Land ‘heap of broken images’ production for the English National Opera. Stefan Herheim’s Bayreuth Parsifal remains utterly in a class of its own. One thing, however, that distinguished this production from the previous night’s Dutchman was the role of Heidi Stock as acknowledged revival director. Her material might not have been the most inspiring but she ensured that the cast, including the chorus, knew what it should be doing rather than being left to fend for itself. A nice touch, whether hers or Adam’s, was to have the brothers all turn away from Amfortas upon his first act pleas for mercy.

This brings me to the singers. Parsifal is a less fiendish role than Tristan or Siegfried, for which one might read that it is not simply impossible. Nevertheless, it is hardly an easy ride. Stig Andersen did a highly creditable job, even managing to seem vaguely plausible as the foolish boy of the first act, if without the success in this respect of Stefan Vinke in Leipzig a week earlier. Lioba Braun was an excellent Kundry. She was perhaps less impressive as the seductress of the earlier part of the second act but gave a memorable portrayal of unhinged reaction to Parsifal’s rejection of her kiss. Like her character, she hurled everything into her efforts to change him. Matti Salminen was slightly disappointing earlier on, most uncharacteristically subdued; however, his tone garnered richness and authority a little way in to his third act scenes. Thomas Jesatko was thrillingly malevolent as Klingsor, perhaps more so than he had been at Bayreuth, although there the production had more than made up for it. Hans-Joachim Ketelsen was a more than acceptable Amfortas; I had probably been spoiled by the astounding portrayal offered by Tumoas Pursio for Oper Leipzig. The Flowermaidens were a mixed bunch, as it were. Sadly, those who looked unusually ‘mature’ sounded somewhat past their best too, although there were clearly some good voices amongst the group. Mention should also go to a splendid Voice from Above in the guise of Sori Lorentzen. All in all, then, this was a rather successful Parsifal, at least in musical terms.
Posted by Mark Berry at 12:04 pm