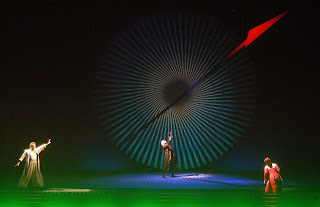 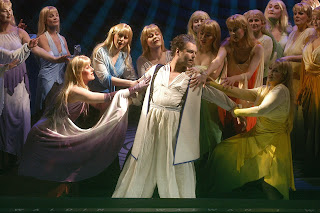 Images copyright Andreas Birkigt (N.B. there were no images available for the current cast, so Petra Lang will be seen in place of Susan Maclean as Kundry)

All told, this was an impressive Parsifal, a revival of Roland Aeschlimann’s 2006 production for Leipzig, shared with Geneva and Nice. Aeschlimann’s designs tread a careful and often revealing line between abstraction and representation. Colour plays an important role, both in demarcating locations – perhaps not in themselves always of the greatest importance, though distinction between them is – and in the dramatic transformations that occur within particular scenes. Gurnemanz’s forest is evoked without being fetishised; after the risible telegraph pole approach of Klaus Michael Grüber’s lamentable production for Covent Garden, one has to be grateful for the smallest of mercies. Thankfully, this production’s virtues extend beyond that.

I was initially a little nonplussed by what seemed to be the Grail. Amfortas uncovers whatever it is, to hold up a sheet which, by a trick of lighting – and ‘trick’ seems to be the operative word – presents a Turin Shroud-like vision of Christ. So far, so Feuerbachian, I thought, but do we not need something a little more substantial – in more than one sense – to explain the sustenance afforded to Monsalvat’s community, in decline but not yet dead? However, as the Eucharistic – if that is what it be – mystery progresses, something else is revealed, to which all turn and which clearly replenishes the community, though the precise or even imprecise nature of this far-away object, which we spy through what appears to be a tunnel to another dimension, remains unclear. What is very clear, however, is that it too is revivified by the workings of grace via Parsifal, gaining lustre and perhaps confidence, certainly becoming – visually – more multi-faceted. Aeschlimann may or may not subscribe to the Christian terms in which Wagner couches his drama but that does not appear to matter. This is a far more fruitful, open-ended approach than many, which fits moreover both with Wagner’s own intellectual approach and with the mysterious, oracle-like nature of his musical drama. For it was clear from listening and watching that Aeschlimann knows the score and not just the words; events on stage coincided with musical events. This ought to be a matter of course, yet so often is anything but.

There is also a highly visible spear on stage throughout the second act, reminding us of what is at stake, as if we could have forgotten the highly visible – and highly disturbing – wound of Amfortas and the scar of Klingsor’s hideous self-mutilation, both born of impure lust, sexual and power-related, if the two can indeed be separated. Moreover, the characters actually appear to be directed, another of those things which ought to go without saying yet is a rarer occurrence upon the contemporary opera stage than one might even reasonably hope. I liked Kundry’s uncovering of the snow to reveal the moribund community as Good Friday worked its spell – perhaps a homage to Ruth Berghaus’s celebrated Frankfurt production, in which Parsifal and Kundry rolled back grey canvases to reveal green meadows, yet more ambiguous, less strident in its desacralisation. It was far from clear that this was really an act without grace; it might well just have been a symbolisation of something far more mysterious. It is not always necessary to spell everything out.

There is no dove at the conclusion, which is no great loss for all but the most Old Bayreuthian of Parsifalians, although Stefan Herheim in his magnificent, all-encompassing 2008 production for Bayreuth managed to include it without bathos – or rather with a non-mocking mediated irony. More worrying for me was the absence of the sign of the Cross at the end of the second act. It is not that I think this must take place. However, if it does not, then it seems to me that there ought to be something, even if a polemical absence, in its stead. Otherwise, as here, Parsifal sings of something that simply is not there and it all just seems a little embarrassing – and meaningless. Such insensitivity to the text is the order of the day for many productions but is a rare exception in this production.

The Leipzig Gewandhaus Orchestra was on excellent form, save for a few too many fluffs from the horns. It was not a virtuoso performance, such as we might hear from the Berlin Philharmonic in this repertoire. Rather, it illuminated the score from within, with evocative woodwind, baleful liturgical brass, and marvellously yet understatedly rich in string tone. (If only one could have said the same about the preceding night’s St Matthew Passion.) Ulf Schirmer impressed as conductor. Again, his was not a reading that drew attention to itself, yet line was maintained throughout. If without quite the staggering inevitability of Bernard Haitink at Covent Garden, Schirmer did not compare unfavourably with Daniel Barenboim last month in Berlin. There was a highly dramatic conclusion to the second act, contrasting strongly and appositely with the ‘liturgical’ first and third acts, not that the distinction was – or should be – absolute. Moreover, he subtly drew attention to the links – whether outright quotation or something more allusive – with Wagner’s preceding dramas. Anyone can hear the Lohengrin quotation upon Parsifal’s shooting of the swan – and, one would hope, the Nietzschean ‘voluptuousness of Hell’ evoked by use of the Tristan-chord. Yet connections with the Ring-dramas, Die Meistersinger, and earlier works too are there to be made – and they were.

In this, Schirmer appeared to be in accord with his director and with his Parsifal. This was the first time I had heard Stefan Vinke, but I hope that it will not be the last. His is a true Heldentenor. We all have our favourite voices from the past and it can be unduly tempting to dwell upon them; but Vinke put me in mind of Jess Thomas. Thomas was perhaps no one’s favourite Siegfried or Parsifal, yet when one thinks of what we have heard since, he has evidently been underrated. Certainly one could hear Siegfried in Vinke’s voice and, moreover, one could understand through his interpretation how much of Wagner’s previous hero remained in the first act of Parsifal. The dramatic point is that Wagner’s erstwhile rebel without a consciousness has failed and therefore the problems he has raised must be revisited; something else must be attempted. For the relative obnoxiousness of Vinke’s Parsifal – and one assumes Aeschlimann’s too – would be transformed by the workings of grace into something quite different. Not that the journey was easy: I liked his near-succumbing to Kundry’s temptations for a second time.

Susan Maclean seemed to grow into her role as the temptress. Succeeding Petra Lang cannot have been easy but, as time went on, Maclean, throughout a fine actress, also became increasingly impressive vocally. The successful contrast between her character(s) in the outer acts and the second act showed that ideas, occasionally adopted, of having two singers as Kundry should probably remain filed under the heading ‘interesting’. Tuomas Pursio was an outstanding Amfortas, my still-fresh memories of Hanno Müller-Brachmann last month notwithstanding. Not only was every word of the text clearly audible; not only was every note rendered meaningful; one could readily sense the charisma of this flawed leader, who too often can seem a merely Nietzschean sick-bed caricature of décadence. Charisma and intelligence of response also represented the twin hallmarks of James Moellenhoff’s Gurnemanz. Gurnemanz should never seem like an old bore – and never does in a decent performance. Here, however, we sensed a charismatic leadership quality that helps explain why so many, whether squires or Kundry, will heed him. Jürgen Kurth was a less impressive Klingsor, seeming somewhat underpowered by contrast.

This production was not perfect; surely none has ever been. Yet it accomplished the most important thing any performance could, namely to fill me once again with wonder at the towering greatness of Wagner’s miraculous work. I did not necessarily feel that any of its difficulties had been resolved, but I felt challenged by their being posed anew.
Posted by Mark Berry at 11:52 pm