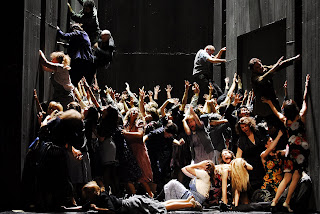 I wonder how select would be the company in which I find myself, having now seen two different productions of Al gran sole carico d’amore within a few months of each other: first in Salzburg, at this year’s Festival, and now in Leipzig. Dawns have a tendency to be false, but I wonder whether Nono’s fortunes might finally be looking up. Peter Konwitschny’s recent appointment as director of productions at Oper Leipzig is an important factor in this case, of course, this being a production he has given elsewhere before. And in Salzburg, Jürgen Flimm’s artistic directorship was doubtless important. He had also produced the work before, although, on this occasion, he ceded that role to Katie Mitchell. Still, the role of individual champions should not be underestimated.

It was certainly heartening to witness the warmth of the reception and the size of the house for the final night of Konwitschny’s Al gran sole. Mitchell’s production was very Katie Mitchell, and had its strengths, but I found this a far more immediate experience – and not solely in terms of staging. For an interesting and commendable aspect of both productions was how closely integrated staging and musical performance seemed to be. Where Konwitschny, aided by Helmut Brade’s designs, took one very much into the heart of the revolutionary ‘provocations’ of which Nono spoke as being the origins of all his work, the Salzburg performance tended to look back at such matters as more a thing of the past, presenting a more æstheticised experience. Much depends upon how relevant today one considers the message of Nono, Marx, Brecht, Lenin, Castro, Che Guevara, et al., and of course the women, such as Louise Michel and Celia Sánchez, whose stories are treated – or, to put it another way, how ripe one considers the time for a more sober, historical, even distanced assessment of concerns, which, following the events of 1989, are no longer our own. Such issues were given heightened relevance by the location, Leipzig, where, as Konwitschny pointed out, there was no need to ask whether the audience would understand the barrage of revolutionary texts presented. (Or perhaps, in 2009, there is every reason to question that belief...?) Moreover, the premiere had taken place on 8 October, twenty years after the Leipzig protests had begun.

These are no mere chance circumstances, but very much part and parcel of how the work has developed and been received. Yet, of course, they are of relatively little importance in abstraction from the performance itself. The staging, arguably less true to Nono’s intentions than Mitchell’s, stood closer to opera as generally understood than her production. There were concrete settings: the Paris Commune for the first part and the second part’s Turin industrial unrest, though this of course did not stop the additional voices – and faces – from participating. Lenin as chorus leader was a witty touch, even more so the Punch and Judy act of Thiers and Bismarck. (The latter are, even in the original ‘text’, if one can speak of such a thing, more conventionally operatic, but one missed out on that in Salzburg.) But it was the Gorki-Brecht tale of the Mother, combined with Cesare Pavese’s prostitute Deola, which really went for the jugular: nothing sentimental, but gut-wrenching, particularly when it came to the factory strike. The malevolence not only of the factory owner – though there was something magnificently agitprop about him and the worker who betrayed his comrades – but, more crucially, of the entire mode of production upon which such structures are based, was searingly portrayed, though compassion, just as it should in Nono, won out when it came to the workers hemmed in by the walls of Brade’s designs. Anger, yes, but human spirit first, especially in the defiance of the Mother’s son, Pavel, a martyr and true hero to the cause.

Every member of the cast contributed to this. It is more than usually invidious to single out anyone in particular. The reader may feel a ‘however’ coming on, and so it is. Iris Vermillion’s mother provoked a powerful emotional response, not through the manipulations of a Strauss – for which, I admit, I fall every time, or just about... – but through the human dignity of a lonely, yet true, contralto voice: quintessential Nono, in fact. Tuomas Pursio’s Pavel was just as impressive as his Amfortas earlier in the year, which, coming but days after Hanno Müller-Brachmann in Berlin, I nevertheless found ‘outstanding’. A young man who could so easily have gone off the rails, he was in a sense saved by the desperation of the situation: his finest hour, not that that is to excuse anything. Pursio exhibited a sense of dangerous attraction, which could finally be focused rather than dissipated.

Moreover, the orchestra and chorus were on magnificent form. Where, in Salzburg, Ingo Metzmacher had led the Vienna Philharmonic, no less, in an astoundingly beautiful account of the score, here Johannes Harneit, like Konwitschny, played for immediate urgency, only possible, of course, through a complete command of Nono’s treacherous score. I doubt that the Leipzig Gewandhaus Orchestra can have played Nono much more often than the Viennese players had, but it might have been Wagner they were playing, such was the commitment and understanding on display. The Leipzig Opera Chorus, fresh from a splendid performance in Lohengrin the night before, was equally at home here. Vocally and on stage their contribution drew one in to the very heart of the drama. Nono insisted that the chorus was the main protagonist in his azione scenica. If, on this occasion, it were a little less so than often, that is no reflection upon the chorus, but simply a consequence of the bravura contributions from all others. This, on reflection, may well prove to be my operatic highlight of 2009.
Posted by Mark Berry at 10:51 pm