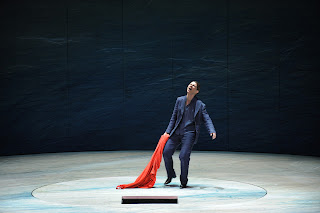 
I have occasionally debated with myself which work would open my fantasy new regime at Covent Garden: the one where Donizetti and Verdi are banished for ever more, where the demands for ‘star’ singers are simply ignored, where ‘corporate hospitality’ is banished still further away than L’elisir d’amore, where we have some modern equivalent to the eminently sensible proposals presented by Wagner to the King of Saxony. Busoni’s Doktor Faust perhaps? Still a front runner, not least on account of its continued absence from so many stages, London included. An Orfeo would have to be a serious contender, too, though, not least on account of its foundational myth of the power of music. The question is which – and despite various other fine works (later in the opening season?), it would have to come down to Monteverdi or Gluck. The former’s Orfeo, the first great opera, has as pressing a claim as any, but so does Gluck’s astonishing reform opera: a statement of intent not unlike that with which the new regime would begin. Moreover, Gluck seems barely more popular than Busoni with those who hold the reins of programming power. 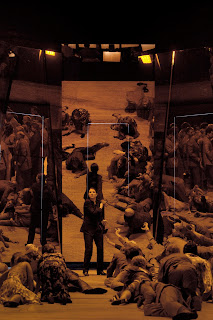 Fortunately, Riccardo Muti, following a period of dissatisfaction with Salzburg opera under Gérard Mortier’s regime, is once again a fixture at the Festival, and Muti has long been an ardent advocate of Gluck. His live recording of Iphigénie en Tauride from La Scala is certainly the finest of the work in question and perhaps the finest of any Gluck opera. Muti now conducts his first Gluck opera in Salzburg, the first staged Orfeo ed Euridice since Karajan's more than half a century ago, in 1959. (John Eliot Gardiner conducted concert performances in 1990.) Though Muti’s Gluck remains blissfully, even defiantly, free of modish ‘period’ concerns, there was nothing routine to this reading: quite different from either his Milanese performances or indeed his New Philharmonia recording.

This must be ascribed in part to the presence of the Vienna Philharmonic in the pit. Its golden sweetness is quite unlike that of any other orchestra, especially when playing for a favoured conductor, as here. This was a more Mozartian Gluck than one often hears, or indeed has heard from this particular conductor: tender and seductive, as Orpheus should be. The VPO’s fabled strings were of course crucial in this respect, but likewise its Orphic harp, those melting horns – sterner when necessary – and, not least, its truly magic flutes. The size of the orchestra was neither small nor especially large, but seemed just right for the Grosses Festspielhaus. (Another, especially cretinous, aspect of fundamentalist criticism is furious insistence upon particular sized forces, irrespective of the venue and acoustic.) The harpsichord (Speranda Spaccucci), contrary to reports I had read, was audible throughout. I am unconvinced that this is necessary, but it was interesting to note that some writers must have decided beforehand that they would not be able to hear the continuo, and therefore did not – or so they claimed. Muti’s tempi obeyed no particular pattern, taking their cue instead from the requirements of the drama: on occasion, though only on occasion, daringly slow, especially during heightened sections of recitative, but the music never dragged. The overture had me slightly worried: rather hard-driven, à la Toscanini¸ but that was a single exception.

This performance was fortunate too in its singers. The Concert Association of the Vienna State Opera Chorus sang excellently throughout: intelligible, implacable, imploring. Genia Kühmeier was a beautifully toned Euridice and Christiane Karg a winning Amore: not at all irritating, which it is sadly necessary to note. It was, however, quite rightly Elisabeth Kulman’s Orfeo, along with the orchestra, who was the true star here. Kulman’s richly instrumental tone, redolent of the chalumeaux Muti perhaps surprisingly elected to use, acted both as Orpheus’s voice and his lyre. Detailed attention to words heightened rather than detracted from her often heartrending delivery of the vocal line. Che farò senza Euridice?’ sounded not as if it were merely that aria, but as a crucial part of the drama, prepared by recitative; though the voices are very different, the performance that most readily sprang to mind was that of Dame Janet Baker. (Her recording under Raymond Leppard remains the safest first choice, though there is always Furtwängler…) 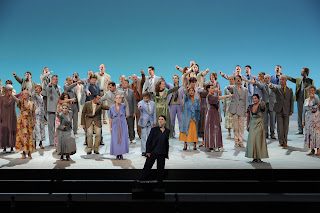 Dieter Dorn’s production is often attractive, not least when it comes to Jürgen Rose’s costumes and the arresting images of Hades, with which the second act opens. It is difficult, however, to discern any especial view of the work: fine, up to a point, since it is perfectly capable of speaking for itself, but a little disappointing. Where the production really falls down is in the ballet scenes. They present a potential problem, but there is no need for them to fall as flat as the final one in particular does. A ballet would have done fine; one might have considered it the obvious option for ballet music… Instead, we have a tedious working out of what seems to be ‘how the story just told is relevant today’. It is not suggested that the power of music might be at work, but rather that we should all work through our problems and live with each other as best we can. The tedious ‘movement’ resembles the sort of thing one might see in primary schools: a pity.

Muti being Muti, we certainly do not hear the bravura aria that often closes the first act (stage-stopping, but perhaps not even by Gluck at all, and out of keeping with the reformist ethos), nor even the Dance of the Blessed Spirits. It is the Vienna version we hear. I see no problem in principle with performing a wisely assembled composite edition, but there is an integrity to Gluck’s first version that is justification enough. It was a brave and good decision to perform the work without an interval. We did not even hear applause until the end.

Please do not take as written the a priori criticisms of Muti’s Gluck from ‘period’ fanatics; they could have composed – and perhaps did – their fatwas before hearing the performances, as tiresomely predictable as a newspaper column from a Polly Toynbee or a Simon Heffer. These critics will never be satisfied until any semblance of humanity has been extracted from Baroque, Classical, and even much later music. To treat this foundational musical drama as music, and not as an exercise in pseudo-archaeology has become, astonishingly enough, a rare thing indeed. Only a conductor of Muti’s standing would dare do so today. The rewards reaped are rich indeed.
Posted by Mark Berry at 5:45 pm