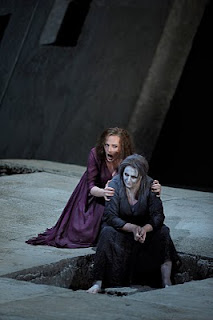 
Elektra was the fourth and final of my Salzburg operas in 2010. Despite the virtues of the preceding three, Strauss’s greatest opera indubitably received the best performance and production of all. Given the cast, conductor included, I had suspected that it might, but expectations can all too often be confounded. Not so here. Whilst the Vienna Philharmonic Orchestra, a jewel in Salzburg’s crown second only to Mozart himself, proved excellent in all performances, I was simply astounded by its contribution on this occasion. Playing for a conductor it loves, such as Daniele Gatti, it remains without a shadow of doubt the finest orchestra in the world. The sweetness of string tone is one of the wonders of the world, likewise the mellowness of its horns and trombones; I could go on, and probably should… But what was especially striking here was its willingness to respond to the brazen modernism of Gatti’s reading. Greatly experienced not only in Mahler but also in Berg and Schoenberg – I recall a stunning Moses und Aron in Vienna – Gatti married the quintessential Vienna sound to savagery of attack and a revelatory orchestral phantasmagoria, which made one wonder why Strauss spoke so dismissively of Schoenberg’s Op.16 orchestral pieces. And yet, whilst I  may never have heard Strauss sound so close to Schoenberg, he never actually sounded like Schoenberg. The composer’s voice sang through, not least in the swing of his dance rhythms, in the kaleidoscopic intimations of Der Rosenkavalier, and in the soaring lyricism that even here foreshadows the composer’s fabled ‘Indian summer’. Gatti heard, and the VPO played, with a structural command that would surely have impressed Furtwängler: heard in one gigantic breath, this was Fernhören indeed. 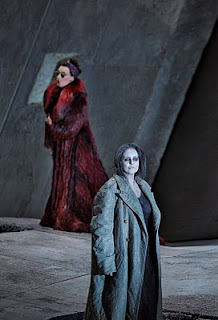 I admit that my heart sank when it was announced that Iréne Theorin had succumbed to the filthy weather Salzburg was experiencing, confined to her bed with a sore throat. Janice Baird had responded to a telephone call the previous day, leaving her holiday in southern Spain. Carping excessively, there were occasional odd vowel sounds – her opening ‘Allein’ incorporating one of them – but otherwise, one would never have guessed that she had not been giving an acclaimed performance all the way through the run. This is, by any standards, a killer of a role, yet Baird emerged having given an intelligently conceived, dramatically urgent account, superior to many that grace the world’s foremost operatic stages. Waltraud Meier’s Klytämnestra was a subtler portrayal than one often hears; it is all too easy to turn the character into a caricature, a witch-like figure meriting little proper consideration. Here, Meier sometimes made one strain to hear, though one always could. There were splendidly dramatic gestures, but more common were passages of Lieder-like intensity. Eva-Maria Westbroek may well be the best Chrysothemis I have heard. The ‘normality’ of Elektra’s sister generally seems weirder than anything else; such is a valid reading. But Westbroek actually made some sense of her desires, her femininity, her hopes, and her determination. She sang gloriously, like the fine Sieglinde she is: radiant, but also meaningful.

René Pape’s Orest was just as fine. His voice is so extraordinarily rich and beautiful that one can sometimes find oneself mesmerised; one should resist the temptation, for he uses Hofmannsthal’s words just as intelligently as Strauss’s notes. The Recognition Scene, ever intensifying, was at least as moving as any I have heard. Why some critics claim Elektra suffers from longueurs I have never understood; if not quite so concise as Wozzeck, it is not far off. Certainly the intensity of the performance would not let one’s attention wander for a single second. Robert Gambill sounded in better voice than the typical Aegisth, yet without undue heroics that would have detracted from the character’s despicable weakness: a very tricky task to bring off, but Gambill did. All of the smaller roles were well taken; I especially liked the rounded high tenor of Benjamin Hulett’s Young Servant. 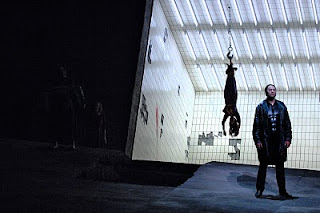 Nikolaus Lehnhoff has perhaps excelled himself here too, aided by Raimund Bauer’s striking, almost apocalyptical stage design. Indeed, one felt that this might have been a contemporary version of the Elektra Lehnhoff’s mentor, Wieland Wagner, had planned with Pierre Boulez, but which, owing to Wieland’s death, never materialised. There were no gimmicks; instead, we experienced an unremitting intensity of single-minded vision, born of myth, never fetishised, with hints of the early twentieth century, without undue specificity, convincingly welded into a dramatic whole. The starkness of the sets, of Andrea Schmidt-Futterer’s costumes, and Duane Schuler’s lighting provided the perfect setting for the musical drama to emerge. There was no attempt to overshadow, to foist an irrelevant concept upon the drama; the production emerged all the stronger for it. The final revelation of the palace, Klytämnestra hanging, thus elicited a true horror, rather than the grand guignol lesser directors might have imparted to proceedings. (A certain recent Salome springs to mind.) It seems almost unconceivable that I should have emerged elated from Elektra, still less that I should readily have seen and heard it again immediately, but such was the case.
Posted by Mark Berry at 8:23 pm