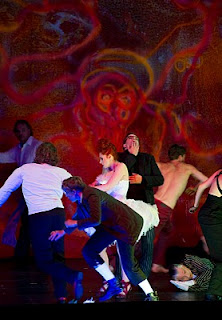 
After the most boring production of Lulu imaginable – and then a bit more boring still – at Covent Garden (Christof Loy), I was predisposed to respond positively to a new staging. Certainly the feeling of immediate relief that there would be something to see, something that might respond to the words and music, was welcome. But it was not just a matter of contrast here: Vera Nemirova’s production had its particular advantages, not least a sense of theatre, and of appropriateness to the work, something of which one could hardly accuse Loy’s self-trumpeted ‘reductionism’. Daniel Richter’s designs played a crucial role in this respect, though the third act would prove more problematical. In fairness, it should be noted that to stage the third act at all was a relatively late decision. Quite why some people think there is any virtue nowadays in omitting Friedrich Cerha’s completion, I simply cannot understand. Perhaps it is a matter of not actually understanding what Cerha did, since I heard one person beforehand speaking of Cerha having ‘composed’ the music for the third act and how different it therefore sounded. It is difficult, though, to imagine that this could have been the motivation here. If I remember correctly, Nikolaus Harnoncourt was originally to have conducted, so it may well have been a matter of personal idiosyncrasy. Whilst Harnoncourt’s reading would doubtless have staked a claim to be filed under ‘interesting’, I cannot say that I was distraught to have had him replaced with Marc Albrecht. 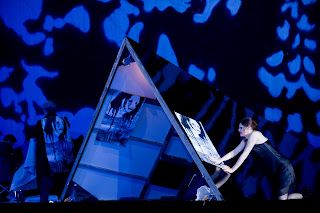 Back to the production. It was not especially time-bound, which seems to me in this work a loss. People speak of the ‘mythical’ nature of the work, but equally important is a sense of time and place – which may or may not be the time and place specified, but might as well be – and, more importantly still, the interaction between specific and non-specific. There was compensation, however, to be gained in the sharpness of characterisation Nemirova imparted and in the sense, doubtless suggested by the Animal Tamer’s prologue, of meta-theatrical concern. Richter’s scenic designs added another layer to the ‘exhibition’: painterly backdrops, the first act flexible (often drooping) phallus, and the second act pyramid, out of which characters would emerge. I was baffled, however, by the end of the third act, which appeared to be set in a wintry, somewhat Russian-looking forest (or Parsifal, Act III?), a strange substitute for Whitechapel, at least the last time I looked. It raised irritating, rather than provocative, questions, along the lines of: whatever are these people doing here and what relation does this have to what we have seen before? 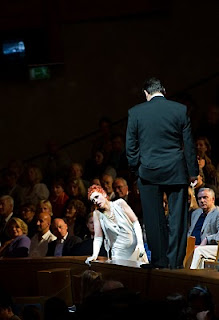 The Paris scene, however, was a triumph. It seemed that Nemirova had been liberated by the relatively short notice of staging and had relied upon theatrical instinct to extend her performative idea. There had been occasions earlier in which mirrors had revealed conductor, orchestra, and the audience, but the coup de théâtre was to open with toasts from within the audience, members of which were revealed actually to be characters. The action was thereafter played out in a space that blurred, if not quite obliterated, the boundary between ‘performance’ and ‘life’. I imagine that this might sound dreadful, but the question is whether it worked, and it did. Lulu’s emergence down the steps of the Felsenreitschule in a slinky, yet stylish gown (Klaus Noack’s costumes impressed throughout) enhanced her ‘star’ quality. I was unsure, though, about the animal masks donned by her retinue: presumably harking back to the prologue, but if so, reference during the first two acts would have helped. All the world, or at least all the riding school, was a stage, however, reminding one of Lulu’s oft-forgotten blackest of comedy. I thought it a pity that there had been no film for the film music: instead we merely saw some men of the world reading all about it from their newspapers. Still, at a time when video unnecessarily invades the most anodyne of productions, perhaps there was method in its absence. 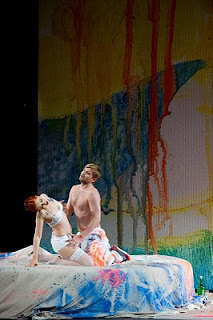 Musically, there were many laurels to bestow. Patricia Petibon may not efface memories of Christine Schäfer – a wearily predictable comparison, I know – but she turns her particular abilities to good effect. I cannot say that I warm to her voice, but not warming to Lulu’s voice has its own dramatic consequences. A degree of alienation is no bad thing here, a blank canvas more telling than more naturally ‘expressive’ singing. Whilst some pitches are less accurate than others, one could doubtless say the same about every performance there has ever been. Most importantly, there was a strong sense of character, both on stage and vocally. Coloratura was in general effortlessly despatched, with a proper lack of heart. Pavol Breslik was simply outstanding as the Painter and the Negro. One really wanted the former to get away from Lulu as soon as possible, his honeyed tone making a bid for doomed sympathy belying his mere acts. (It probably did no harm that he was better looking than anyone else.) At any rate, he had his third-act revenge – sort of. Michael Volle was on just as good form here as at Covent Garden, but was given far greater opportunity, which he took, to flesh out Dr Schön as character rather than cipher. One rightly felt ambivalence and ambiguity, but one also savoured a fine command of line and subtle shading therein. Thomas Piffka replaced the originally slated Michael Schade as Alwa. During the first act, I was a little nonplussed, but this portrayal grew as time progressed – perhaps deliberately so? I was most taken with his selfishness as composer at the end of the second act: powerfully conveyed, whereas one often feels ‘mere’ sympathy for Berg’s partial self-projection. Tanja Ariana Baumgartner presented a less self-consciously ‘sympathetic’ Geschwitz than one often encounters; Lulu’s irritation was quite understandable. Perhaps we have at last progressed beyond the need to single out a lesbian character, though I must admit that I should not have minded a little more tugging at heartstrings here. It was good to welcome back Heinz Zednik (remember him in the Boulez-Chéreau Ring?) and Franz Grundheber, whose Schigolch was in the Norman Bailey class. There was a back story here, far beyond caricature, without attempting inappropriate dignity or, again, ‘sympathy’. Thomas Johannes Mayer, whom I did not recognise from his fine Wotan in Paris, did excellent work, especially as the ghastly Athlete, repellently raising the character to the level of an almost ultimate male response to Lulu’s charisma.

The Vienna Philharmonic was outstanding. One would have expected the devilish sweetness of the strings, though it still merits remark, but every section played superbly. I do not think I have ever heard, at least in this work, such fine xylophone playing, for instance. The sickness, the decadence, the beauty and the bite: all of these were there. This is of course the orchestra for which Lulu has always cried out. Albrecht’s direction was immeasurably superior to that of Pappano’s wishy-washiness at Covent Garden. Not only were there colour and depth; there was, crucially, iron-clad structure, on the micro- and macro-levels. Berg’s intricate writing needs to be projected in a way that relishes, is even seduced by, his formal games and turns them to dramatic ends. Orchestra and composer were here the brightest stars of all.
Posted by Mark Berry at 12:59 pm