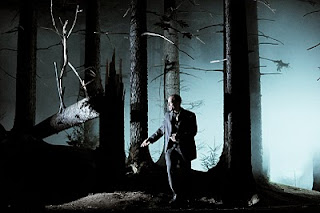 I have been fortunate enough to see a good few Mozart opera performances in Salzburg, including the wonderful Karl-Ernst and Ursula Hermann Così fan tutte three times. This, however, was my first Don Giovanni at the Festival. Though I have seen the opera, this ‘opera of operas’, on many occasions, it has always been brought home to me how extraordinary difficult it is to produce. From the mindlessly traditional (Harold Prince), through the merely mindless (Peter Mussbach and Francesca Zambello), to the flawed yet powerful visions of Calixto Bieito and Graham Vick, I have never felt that a production has ‘nailed’ the work; indeed, in many ways, I find Herbert Graf’s old Felsenreitschule production on DVD under Furtwängler preferable to watch, if dated in a way that the incandescent conducting could never be. Musical performances have varied enormously too, of course, a great regret being that Daniel Barenboim’s superlative conducting in Berlin did not have a better production than Mussbach’s, but that is another matter. 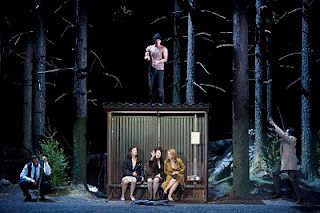 How does Claus Guth fit into this continuum, then? He is certainly more interesting than the brain-dead Zambello and Prince, but there are problems with his vision too. The premise, as revealed in a brief programme discussion, is that ‘Mozart tried to deal with all of our lives in the three hours he had for this opera. But what if he managed to compress everything that moves and occupies us into this framework? We must die. What do we do with our lifetime? Do we conform and subordinate ourselves, do we break out, do we try to fit in or break loose, cut our ties?’ What this seems to boil down to on stage is a bit more like a reality television programme: how does someone with three hours left to live decide to spend those three hours? By taking drugs and trying to have sex with a good few women in a forest, with the help of his slightly subordinate friend. I say ‘slightly subordinate’, since it is not at all clear what the relationship between the protagonists might be. Like so many directors, Guth ignores the social distinctions within Mozart’s work (and they are certainly within Mozart’s as well as Da Ponte’s contribution), and does not really provide an adequate substitute. The setting itself is good: the Salzburg Mönchsberg meets Hampstead Heath. (There is certainly more than a hint of the cruising ground here, though the action is strictly heterosexual: a missed opportunity?) It is absorbing enough in a modern filmic sort of way, but not a patch upon Guth’s brilliant rethinking of Le nozze di Figaro. Indeed, the circle through which we initially view the action – predictably beginning during the Overture – suggests a cinematic peep-hole. A car drives on to stage with Donna Anna and Don Ottavio: no harm done, but no evident gain accrued either. And I simply could not work out who the Commendatore was supposed to be at the end. A ghost seemed rather at odds with the setting; had he just come back to life? No one seemed to know, or to care. 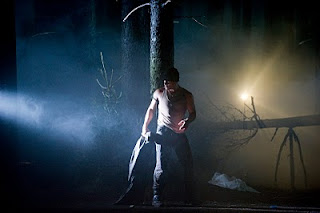 I have seen worse then, but I have seen better, if not yet best. The musical performances tended to be of a higher calibre. It helps, of course, to have the Vienna Philharmonic in the pit; such was certainly the case here. The Viennese might be able to play this music like angels in their sleep, but the level of variegation brought out by Yannick Nézet-Séguin was noteworthy: that does not happen by itself, likewise the revelation and shaping of woodwind detail. Tempi were sensibly chosen: musical rather than ideological. Nézet-Séguin is of the modern alla breve school when it comes to the opening of the Overture and the Stone Guest Scene, but the music sounded thrillingly urgent rather than rushed, as so often it does when taken in this way. Extremely notable was Felice Venanzoni’s fortepiano continuo playing. Many would doubtless decry the high level of imagination, but it was extremely well thought out, and sounded genuinely improvisatory. References were made within the work, and there were some strange post-modern flights of harmonic fantasy. I found it fascinating, like an added commentary, though I should not necessarily always wish to hear it done this way. Robert Nagy’s cello playing was of equal distinction, more prominent, more musically imaginative than I can ever recall hearing before. 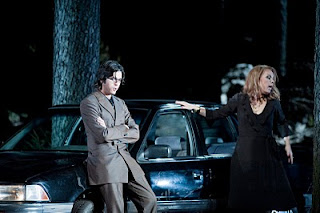 Christopher Maltman made a fine Don Giovanni. Though he clearly did not mind the chance to shed his shirt early on, there was much more to his portrayal than that. There was power certainly, but it was the tender moments that longest lingered in the mind. Erwin Schrott’s Leporello was predictably charismatic, though oddly, I thought the mindless vacuity of Zambello’s production (when he took that role, rather than Giovanni) permitted him greater freedom to play to his strengths than this. Schrott’s voice was in fine fettle, however, his onstage physicality and musicality never in doubt. Aleksandra Kursak’s Donna Anna has an edge to her voice, which some may find more troubling than others, but she threw herself into the character, once she surmounted early intonational difficulties. Dorothea Röschmann’s Elvira steered a sure course between hysteria and dignity. Joel Prieto was a fine substitute for the expected Joseph Kaiser (out for the entire run, alas). This was beautiful singing indeed, elegant too: aristocratic, or it might have been, had the production permitted of social hierarchy. Anna Prohaska’s Zerlina was equally impressive: convincingly girlish on stage, albeit with a kinky side to her innocence, but with a sexy, fully feminine bloom when it came to her vocal production. 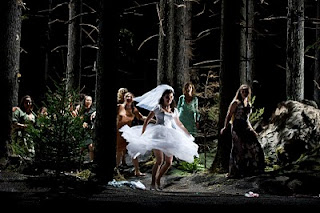 There is, however, one final matter: the version of the score. I am relatively relaxed about this. Prague always seems to me preferable, in terms of the arias used, but here we had the familiar conflation, barring the duet between Leporello and Zerlina. I was quite unprepared, however, for the absence of the final scene. Yes, I know that Mahler did it, and I had a brief Romantic phase during my teens when I thought it would be a good idea too. The feeling of incompletion, however, is jarring, and Guth seems quite to have misunderstood the nature of the finale. In its Brechtian alienation it makes the work far more interesting; without it, we veer dangerously close to melodrama, especially odd given the general tone of the production. Guth claims that Mozart was ‘bowing to convention’, yet throughout the work Mozart has destroyed any such concept; the finale is still more radical in this context, inevitably to us suggesting Stravinsky and beyond. In any case, the music, surely, is begging for completion. Has Guth never heard the D minor Piano Concerto? It is interesting, then, to hear this venerable ‘version’, but it confirms the discrediting of the tradition.
Posted by Mark Berry at 6:05 pm