The Berlin State Opera’s new production of Parsifal could hardly have been burdened by greater expectations with respect to conductor, orchestra, cast, and director, let alone their combination, yet reality did not disappoint. Parsifal-stagings must now be considered post-Stefan Herheim, just as much as an earlier era thought of pre- and post-Wieland Wagner. (We still do too, of course, even those who never saw Wieland’s legendary Bayreuth staging.) Dmitri Tcherniakov proves, unsurprisingly, very much his own man; it would be as absurd to imitate Herheim as it would his predecessor. But perhaps, consciously or otherwise, he may be understood to continue some of the psychological explorations which seemed increasingly to come to the fore in the final two years of Herheim’s production. 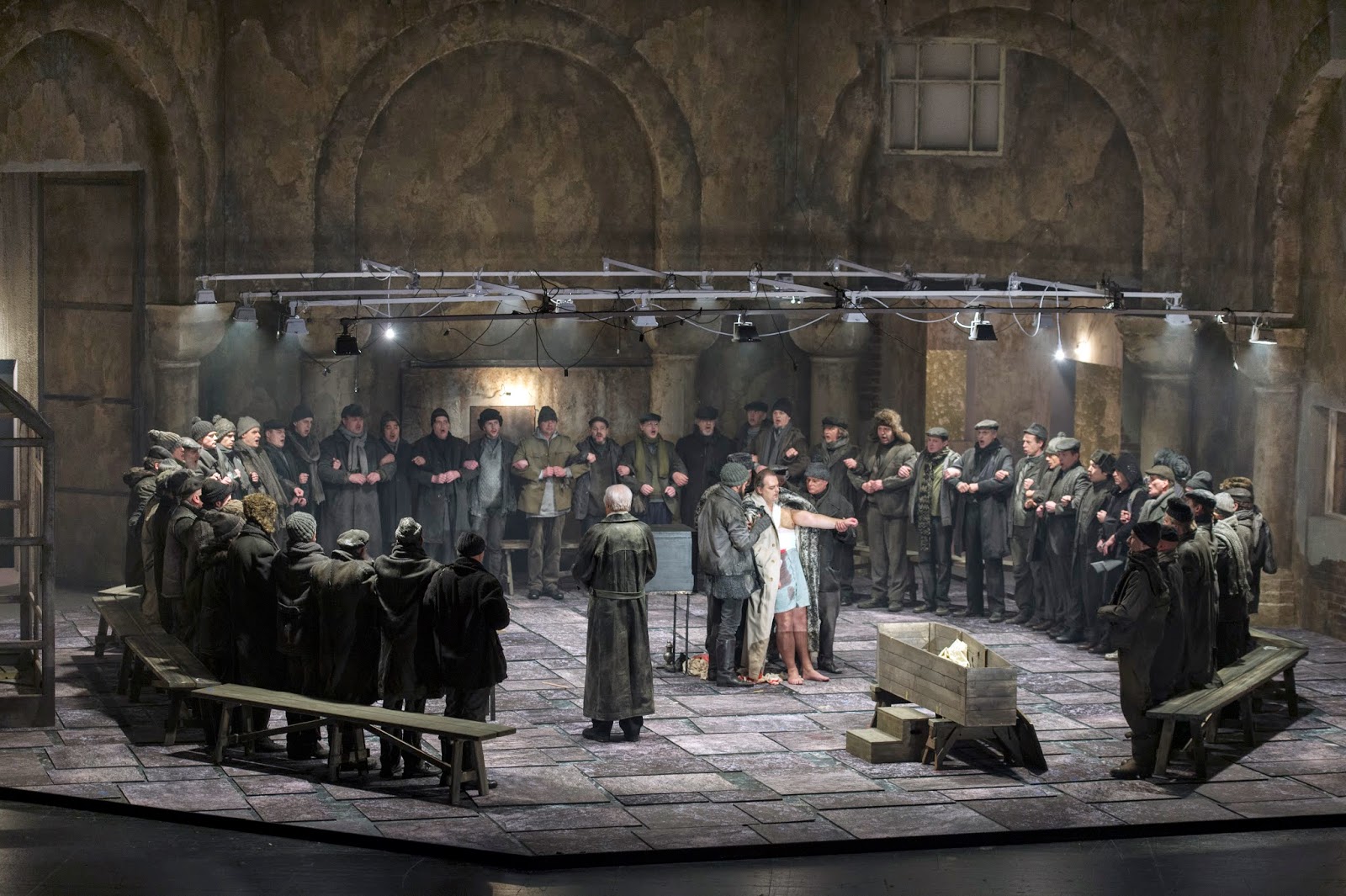 The outer acts, in their different but similar ways, suggest a Russian thinker approaching Wagner. Crowds, their detailed yet certainly never pedantic direction long a Tcherniakov speciality, offer ample possibility for comparison. (That word ‘possibility’ is crucial here; like Herheim and indeed many of the most interesting contemporary opera directors, Tcherniakov seems more concerned to open up possibilities than to present definitive verdicts.) Modern, relatively indistinct dress does not distract, but suggests sameness and indeed an ossified dedication to something that no longer pertains: a lesson for ‘traditional’ staging fetishists, among others. (Kinder, macht neues!) But Tcherniakov does not disregard religion as religion; it is not a proxy for political or æsthetic concerns. As in Wagner, the relationship is complex, indeed provocative.

There is here a (once) Christian theology gone wrong, as Wagner’s conception of Monsalvat demands. Just as in the second act of Götterdämmerung, when increasingly desperate pleas are made to gods who have already departed the stage, so in Parsifal, the crowd continues to believe and to act out of desperation from that belief, or at least to act as if it still believed. A world of Russian holy men, perhaps allied to the mendicants of Boris Godunov, or indeed to the anti-Wagnerian challenges of Dostoevsky and Tolstoy, reacts with that of Wagner’s still-live (and later, Tcherniakov’s still-life) contest between Feuerbach and Schopenhauer. These are old believers and, perhaps, Old Believers; certainly the final outward turn of the community on stage, magnificently presented as if a revivification of an Old Master painting, suggests Khovanschina with a Goya-like twist. Will the new rule, political or monastic, of Parsifal bring more of the same – Gurnemanz, after his shocking stabbing in the back of Kundry, seems effortlessly to have transferred his loyalty to the new regime – or something different? We do not know; nor do they. Who or what, if anything, has been redeemed? What we do know is that Gurnemanz has swiftly put paid to the 'purely human' - as the younger, Feuerbachian Wagner would have had it - rekindling of sexual relations between Kundry, or Woman, and Amfortas, or Christ, or at least Jesus of Nazareth. 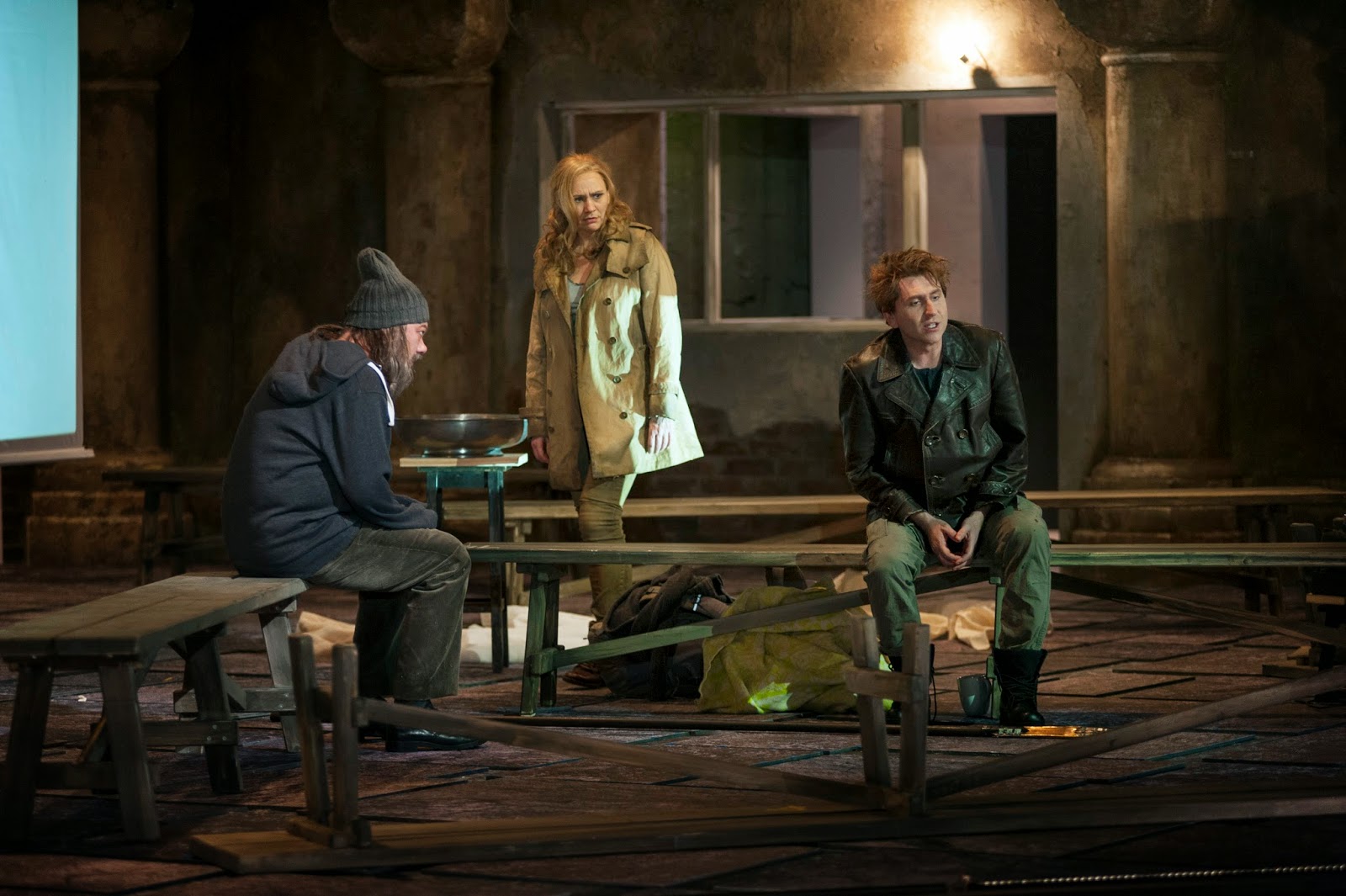 There are certainly clues. Amfortas is identified more with Christ than I can previously recall. He is carried by the knights so as to make him, however unhappily and unwillingly, a visual if perhaps not spiritual reincarnation. More disturbingly still, we see during the final scene of the first act, a re-enactment not only of Amfortas’s wounding but also of some form of transubstantiation, or perhaps mere vampirism, of his own blood. The sustenance drawn may well be nothing – a negative reading of Feuerbach – or it may even be primarily vengeful. There is no doubt, however, that this sick community requires it, and, most intriguingly of all, it is commanded by Titurel, whom we see walk on stage and enter his coffin. Is he a fraud or a thaumaturge? The knights are desperate for him to touch them. He certainly appears to be pulling the theological strings of a cult that has become nasty indeed.

The sameness of the first act – the scene does not shift during the Transformation Music, and indeed the production here burns as slowly and yet as brightly as the work – receives its response in what to begin with seems the unconnected action of the second. Here, Tcherniakov offers a brave, challenging exploration of sexuality, above all of those paedophiliac tendencies our society would desperately wish away as aberration, as the misdeeds of individual ‘monsters’. Klingsor, the very image of a tabloid newspaper’s ‘paedophile monster’, has built a home with his daughters, the Flowermaidens. Some are young; some are older; all are dressed as ‘pretty girls’. Such is clearly what has proved the undoing of Monsalvat’s knights. He clearly repels Kundry, not least when he paws her, but she of course remains in his power. (Perhaps because he has put himself beyond the ‘moral’ pale? Very Nietzschean. Or perhaps we might think of Crime and Punishment.) 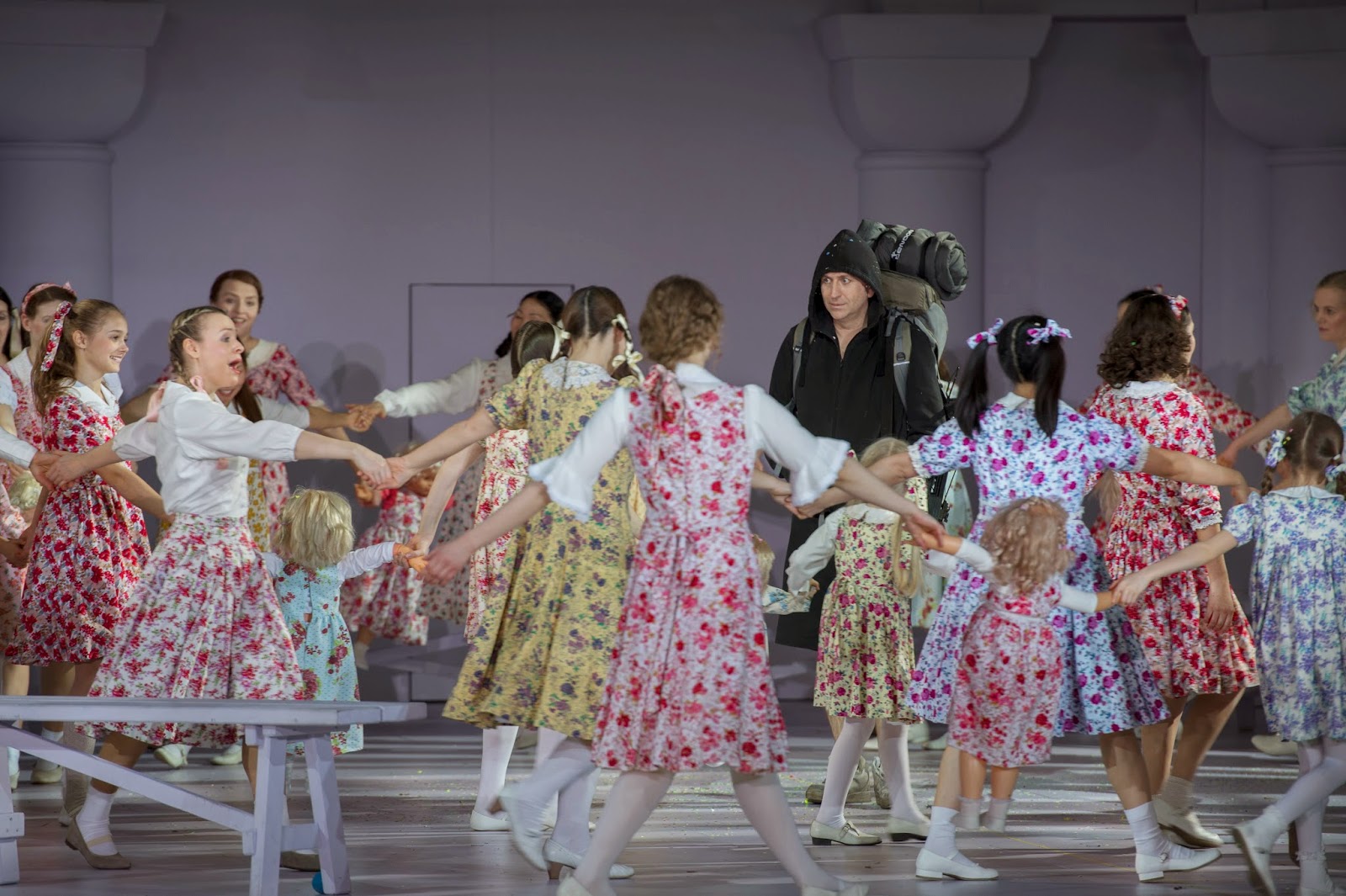 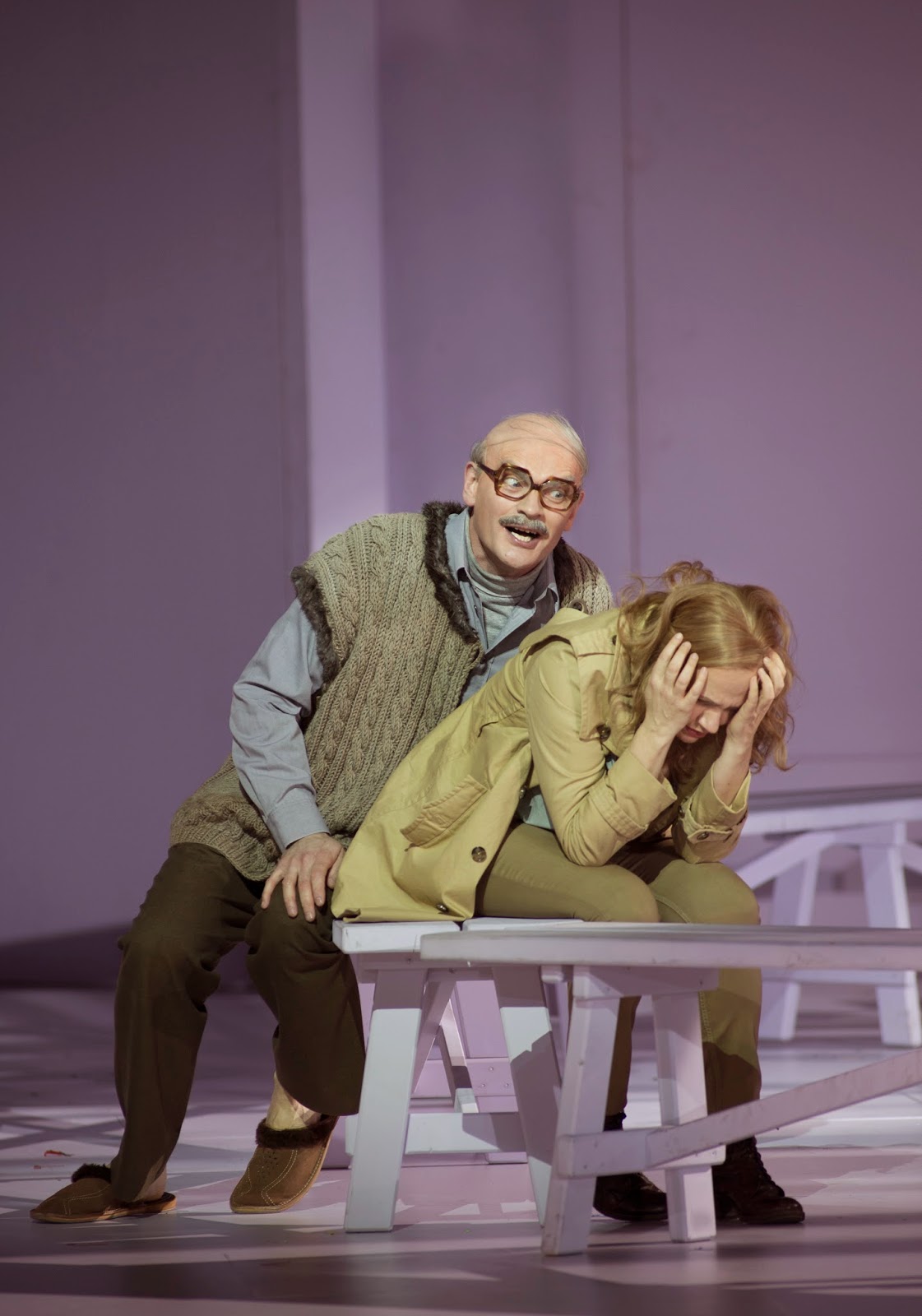 When in Klingsor’s power, she is certainly willing to learn from his example, or from what it might suggest. Her kissing him already suggests an inconvenient truth concerning the complexity of abuse. Wagner’s proto-Freudian path of realisation is given shocking realisation in Kundry’s education of Parsifal, partly visualised in the staging of his memories. He and Herzeleide were close, perhaps too close. She is furious when she sees his adolescent first exploration with a girl-next-door, or perhaps even his sister. The emotional fall-out kills her, just as Kundry tells him – and us. Kundry, however, attempts to play upon those complex feelings, to reignite them, reintroducing him to the miniature rocking horse with which once, under Herzeleide’s spell, he had played. Quite what happens remains unclear, since the moment of the ‘kiss’ – is it perhaps more than that? – takes place off stage. The transformation it effects, when undressed, Parsifal, followed by Kundry, runs back on stage, is, however, never in doubt. The would-be sign of the Cross in this dark world is Parsifal’s piercing of Klingsor with the spear.

A crucial feature of the production that has tied both acts together is the circular seating and action of the respective crowds: knights and Flowermaidens. Sickness pervades both; they may well be more closely connected. The third act continues the work of drawing the two together, though again, suggestively rather than didactically. Ritual to drama – to ritual aufgehoben by drama. But was it the wrong drama? When, in the third act, Amfortas opens his father’s tomb and has the body fall to the ground, is that simply revenge for the inhuman treatment – the abuse – our Christ-like, yet ultimately not-so-very-Christ-like, victim has suffered? Or is it also perhaps a hint at the death of God, Titurel being his father? Nietzsche as well as those Russian writers seems hinted at, or at least available. Nihilism or theological rescue mission? As when one reads Nietzsche, perspectivism demands and yet obscures the answers.

Tcherniakov has staged a number of operas in Berlin with Daniel Barenboim, but this is the first Wagner drama, and indeed Tcherniakov’s first Wagner outside Russia. Barenboim has, of course, considerably longer experience, and put it to great use. The expected long line both complemented and, in its dialectic with tonal and timbral variegation below and/or above, questioned the ‘sameness’ and ‘difference’ of what we saw on stage. The extraordinary world-weariness, which must yet go on, of the Prelude to the third act would have been worth the price of admission alone, not least on account of the superlative playing of the Staatskapelle Berlin, for whose dark-hued contribution throughout, occasionally disrupted by woodwind screams so vivid that they seemed the timbral instantiation of Kundry’s chromaticism, no praise could be high enough. Indeed, the road to Schoenberg, Webern, and to Boulez – his ninetieth birthday honoured in these Staatsoper Festtage – became apparently clear, in all its Boulezian complexity. Stage action may not have been subject to serial procedures, but in some sense its interlocking with the score through such close musico-dramatic collaboration, suggested such an analogy. Certainly, Boulez's proliferative technique is worth considering not just as having roots in Wagner, but as one potential tool in our quest to understand him. 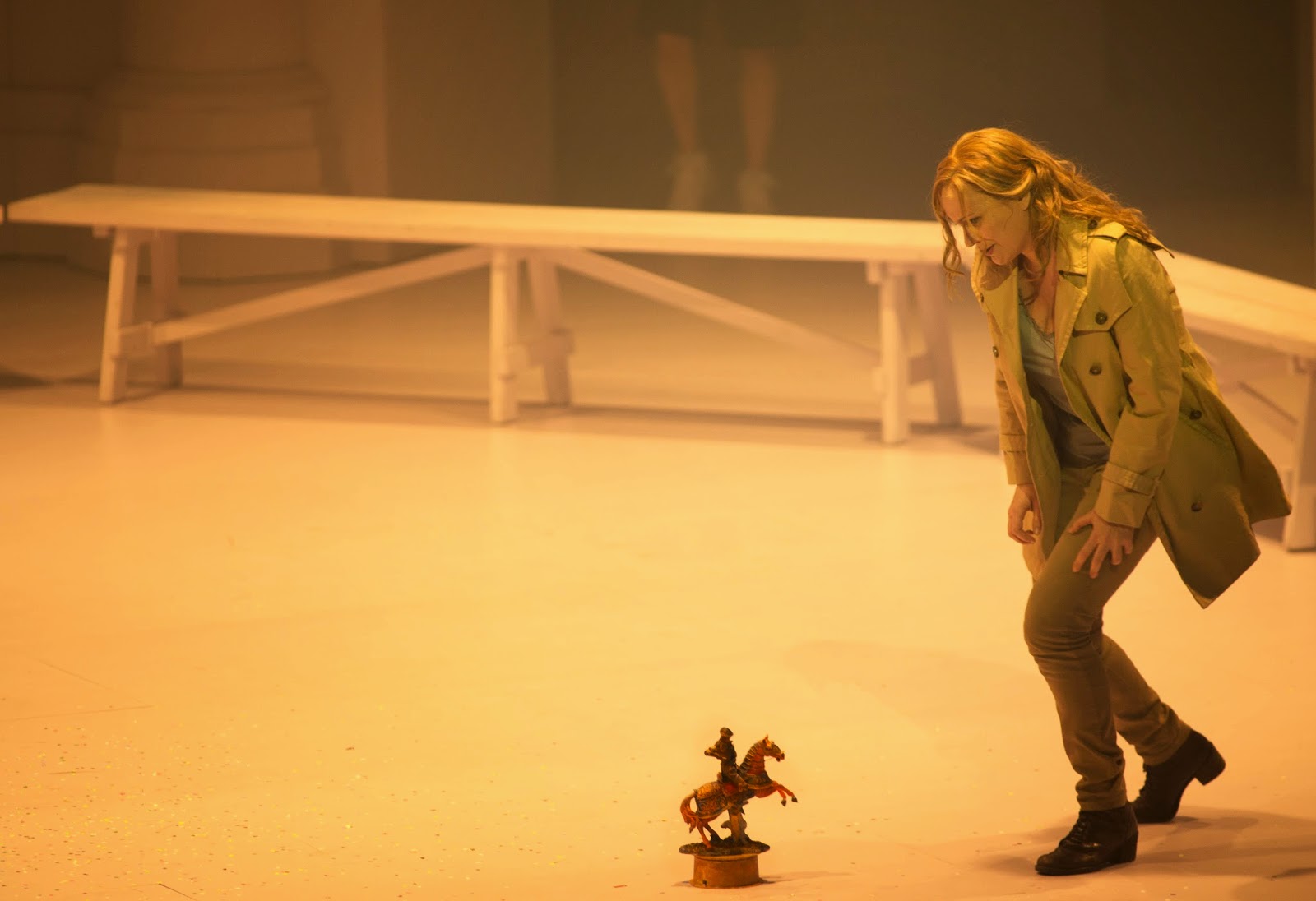 Much the same might be said of the work of this excellent cast. Andreas Schager cemented his reputation as the finest Heldentenor alive, indeed the finest I have heard in the flesh. His tone beguiled yet remained at the service of the text. Moreover, his movements on stage offered a well-nigh perfect portrayal of the awkwardness of an adolescent discovering his sexuality. His reluctance to show himself, hiding himself under his hood, pulled down by Herzeleide and Kundry alike, finds its counterpart in his persistent changing of clothes: seemingly a desire to be clean that can never be fulfilled. Anja Kampe triumphantly overcame illness so as fully to inhabit her role. She seemed less to play Kundry than simply to be Kundry, tireless in fulfilling the demands placed upon her by Wagner and Tcherniakov alike. René Pape’s sonorous Gurnemanz, perhaps more beautifully sung than any I have heard, was chillingly brought into question by that final act of slaughter. Tómas Tómasson’s Klingsor and Matthias Hölle’s Titurel both impressed greatly too, like Kampe loyal servants to composer, to director, and most crucially of all, to the fusion of the two. Wolfgang Koch's Amfortas entered into that musico-dramatic realm with exemplary marriage of Wort und Ton: Sachs turned (very) sour. Choral singing and acting were likewise of the highest standard throughout, a credit to Tcherniakov, to Barenboim, and to chorus master, Martin Wright.

Why, then, was there such appalling booing to be heard at the end, including, incomprehensibly, some apparently levelled at Barenboim? The answer, alas, is all too readily apparent. If there is anything an unthinking audience cannot stand it is to be made to think; if there is anything an abusive society cannot stand it is to be shown that it is abusive. Such fascistic behaviour of course confirms the need for the very productions it so threateningly excoriates.