Ariadne auf Naxos is in many ways the ultimate opera about opera. (Or should that be Moses und Aron?) Many, perhaps most, operas would seem to be ‘about’ Orpheus and his art in some way or another. (In a shameless plug, I should add that such is the subject, or at least the starting-point, for a chapter on operatic culture I have written for the soon-to-be-published – i.e., proofs already checked – Routledge Research Companion to Musical Modernism, edited by Björn Heile and Charles Wilson.) It would be far from absurd to claim that an artwork can fail to be ‘about’ its art form, its genre, itself in one sense or another; or would it? Always we seem to be brought back to those oppositions, those dialectics, that haunt, arguably determine Western history and culture, whether we like it or not. Yet Ariadne seems to take it all in, the ‘business’ as and the ‘art’, the artists and the characters, the metanarrative and the narrative, ultimately also the transformation that may or may not transcend – Hofmannsthal and/or Strauss? – as well as the manifold absurdities and frustrations at which one can only laugh, except that is, when one can only cry. 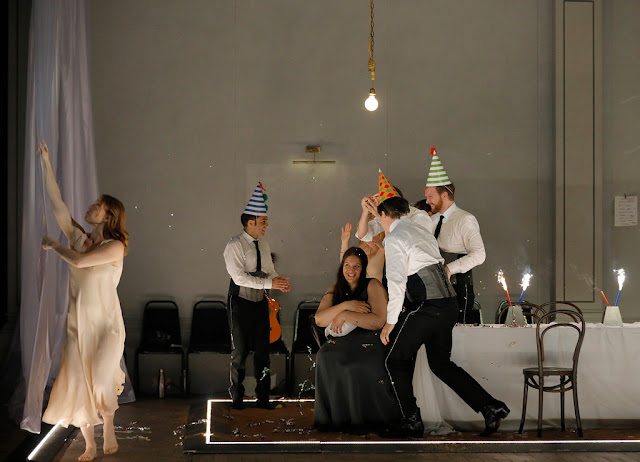 Productions can approach such a work – in practice, with the possible exception of Elektra, almost any work! – in any number of ways. There is nothing wrong with emphasising one strand, one particular reading: single-mindedness has its place, just as much for, say, a Hans Neuenfels as for a Furtwängler or a Klemperer. (The idea of a Klemperer Ariadne in particular intrigues, not least on the basis of his Pulcinella Suite, but I digress – and I have no Music Master to restrain me or indeed to inflict cuts, justified or otherwise.) Ranking is a game for politicians and accountants – although donors perhaps have their place in this world too – but I am not sure that I have seen a production that has kept so many balls in the air at the same time, investigated their nature, and added a few of its own, as Katie Mitchell’s for the Festival d’Aix-en-Provence.

The Prologue comes across as relatively conventional: not in the sense of wanting ‘pretty’ frocks and so on, but it sets the scene, as perhaps it should, ready for the transformations to come. It is full of life, full of character; there is probably, as doubles would be the case in watching any ‘making of’ documentary, more than one can take in in a single viewing, yet by the same token there is no sense of overload. It is not ‘busy’ for the sake of it, as often seems to be a temptation – perhaps a valid one – here. One enjoys the splendidly camp yet undeniably successful and talented Dancing Master of Rupert Charlesworth: watch him rehearse his dancers and you will see that he knows his stuff as well as owning the room. One sees that room transformed into a stage and an audience – with, rightly, a flexible curtain of a barrier in between. Lights taken down and replaced suggest something afoot: a distinction being made between reception room and desert island. We are not yet sure, however.

Perhaps most important of all, we see and feel – this is a musical thing too, of course, but also in Mitchell’s staging – the emergence of Zerbinetta as a real person, as a human being, to an extent uncommon, perhaps even unparalleled, in my experience. The tenderness of Sabine Devieilhe’s performance is something; she can do the coloratura fireworks too, as we shall learn. So too, however, is the direction: her placing with (and not with) other characters at particular times, her reactions to them, leading up to a moment quite justified and yet also shocking: the furious slap she gives the Composer after his/her (self-)righteous words at the close. Has (s)he not listened to a word Zerbinetta has said? Most likely not; for even in a world such as Mitchell’s, in which gender is fluid, indeed performed, there is no doubting that masculinity rules the roost. Molière after all wrote Le bourgeois gentilhomme, after all, thus in a sense initiating or at least provoking this particular drama. In connection with that, it is perhaps worth noting that Marc Albrecht seemed particular attuned to the connections – and implicitly the contrasts – with Strauss’s incidental music too. His, overall, was a wise and splendid reading, never seeking attention for itself, yet fully aware of when the orchestra should soar – above all at the close. If an orchestra is unlikely ever to sound at its best outdoors, the Orchestre de Paris, a few scrappy string moments aside, offered warmth, clarity, and chamber-music responsiveness throughout. Albrecht’s gentle yet authoritative guidance nevertheless remained an absolute necessity. 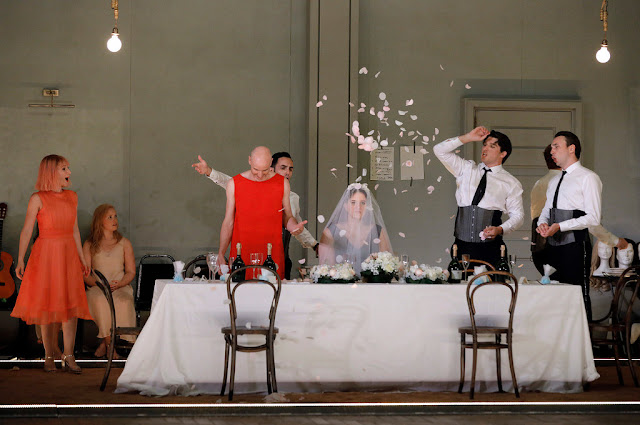 Back, however, to the stage. (How difficult it is even to write about keeping all those balls in the air!) Already, in that Prologue, Mitchell and her team have slightly prised open the work (and its ‘work-concept’). The dialogue has not been quite as one remembered it, perhaps, although we all know how memories can play tricks. In ‘reality’, Martin Crimp has added some lines to fit what we see, some others have gone, and the surtitles seem to offer a further level of commentary and critique: never too much, but enough to have one wonder. Without returning to the 1912 version, with or without Molière – what a missed opportunity that was in Salzburg in 2012! – elements return or rather are rethought and transformed. The Richest Man in Vienna is there, in a dress, as his wife, who literally wears the trousers. They not only offer interjections, new yet rooted in memories of 1912, at least to begin with; they are offered opportunity to learn, to be transformed. Indeed, they interact with the ‘cast’ almost at will. It is, alas, not clear what, if anything, they have learned; audiences and patrons can be like that. Perhaps, though, it is too soon to tell, for which of us has not on occasion learned more from a performance than might initially have seemed to be the case? The final words, appropriately enough, are given to M. Jourdain’s successor: the experiment has been interesting, but it is unlikely to show the way to the future of opera. That, we may retort, and probably do, is at least as much up to us as up to you, however much you may throw your cash around. 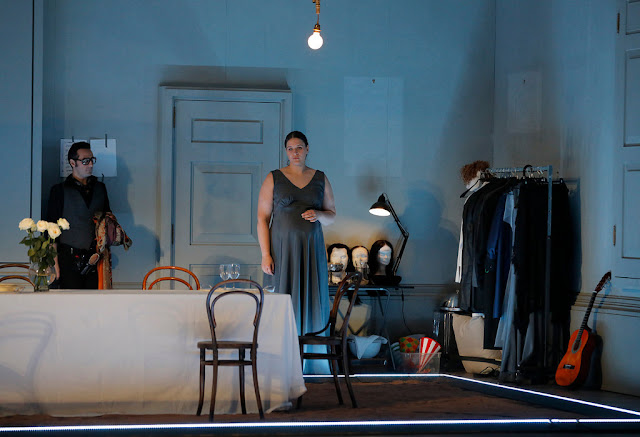 Such is the metatheatricality. Perhaps the real truths of Mitchell’s, Hofmannsthal’s, and Strauss’s opera(s), however, lie in what is too often overlooked: what this Ariadne, partly the Composer’s, partly all manner of others’, does as an opera. Angela Brower’s Composer, beautifully, intelligently sung, has not left the stage; (s)he conducts, at times, although it is unclear whether anyone knows or cares. The Opera concerns, above all, Ariadne on Naxos. Lise Davidsen’s Ariadne proved one of the finest I have heard, possessed of an almost infinite dynamic range, subtly inflected, and endless reserves of breath for the longest of Straussian lines. I do not think I have seen – and this was surely Mitchell’s doing too – her suffer so greatly. The sheer misery of her condition shone through, long before it was revealed that she had been left with child, to be delivered and claimed by a rather nasty – should he not be just that? – Bacchus (Eric Cutler, who again can certainly sing the role). The taunts of Zerbinetta’s troupe – perhaps not intentional, yet no less hurtful for that – sting particularly in such a setting. Indeed, their erotic table-dancing, preening, and squabbling, stage realising words and music in properly post-Wagnerian fashion, seems rightly both beside the point and absolutely of it. When Bacchus offers Ariadne the choice of life or death, we have no idea what she will choose, nor for whom. Right up until the end, we fear she might use the revolver that is one of his ‘gifts’. Will she shoot herself, her child, him, someone else, the entire assembled company? In the end, she does not. A child has been born; so too has an opera. Perhaps, whatever our host may think and demand, the future or a future of opera has been too. We shall see and/or hear – or not.
Posted by Mark Berry at 4:36 pm