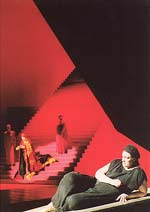 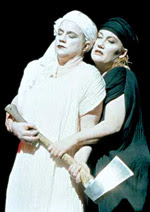 The late Herbert Wernicke’s Elektra is a fine production, similar in its colour abstraction to his Tristan und Isolde for Covent Garden. The starkness of its simple yet never simplistic sets and lighting packs a considerable visual and dramatic punch, quite distant from but probably more powerful than the gore and hysteria one might expect in this work. In a programme note, Wernicke commented that in an age of banal soap operas and family dramas, the last thing we required was more of the same. I am not sure that I agree: a quasi-realistic portrayal of the travails of the house of Atreus could readily point the way to something more profound. Regardless of the validity of alternative approaches, this production, hauntingly redolent of and yet alienated from Sophocles, worked very well. A splendid nod to location was presented by the regal red of Klytämnestra’s cloak – all the more remarkable given the monochrome austerity of the set – cut from the same cloth as the Nationaltheater’s stage curtain. This would subsequently be won, in chilling triumph, by Orest. Elektra’s dance, founded more upon her swinging of the axe than upon any other movement, was appropriately unhinged; I was slightly concerned that she might actually let go of the axe and hurl it into the audience.

Johannes Debus is evidently a talented conductor and acquitted himself well in this fearsome score. His approach was often somewhat pictorial: one could hear and almost see the horses’ gallop. If this occasionally detracted from a greater symphonic unity, I should not wish to exaggerate, for the form was generally clear. Debus stressed the music’s Wagnerian inheritance rather than its expressionistic tendencies. I should have preferred more of the latter but again this should not be exaggerated. My only real criticism was a stridency from the brass at its most aggressive: more Solti than Karajan or Böhm, it did not quite fit with the rest of the interpretation. That said, the orchestra sounded excellent on the whole and, one or two minor slips aside, was clearly doing whatever was asked of it. The chorus, brief though its intervention may be, was on magnificent form.

In Eva-Marie Westbroek, Munich boasted an excellent Chrysothemis. She injected, where possible, a haunting beauty to her role. Her lines were impeccably shaped and recognisably part of a greater whole. As her mother, Agnes Baltsa showed that, the occasional, almost irrelevant, vocal frailty aside, she can still command the stage and can make every word, indeed every spitted syllable, count.. She truly looked the part too. Gerd Grochowski was not the most memorable Orest, lacking conquering charisma, but he did nothing especially wrong. Reiner Goldberg was an impressive Aegisth. The problem, sadly, lay with Gabriele Schnaut in the title role. I can only assume, given her ecstatic reception, that the good burghers of Munich had heard a different performance from that at which I had been present. She had her moments, I admit, albeit in a generalised mature-Brünnhilde fashion. Yet, quite apart from the issue of her maturity – she looked and sounded more like Chrysothemis’s mother or even grandmother than her sister – there was simply too much vocal imprecision, whether arising from her omnipresent wobble or from straightforwardly poor tuning and diction. (Contrast her either with Baltsa or with Jeanne-Michèle Charbonnet as Elektra for the Deutsche Oper.) Schnaut clearly threw her all into the role, but it is time that she turned to more appropriate parts. Her performance as Agave in The Bassarids showed that she is perfectly capable of impressing in the right roles; Elektra, however, is no longer one of them.
Posted by Mark Berry at 12:50 am