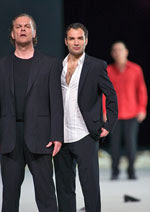 (sung in German as Die Bassariden)

This was my second Auden and Kallman opera within a week, except that it was sung in Maria Bosse-Sporleder’s German translation (as generally seems to have been the practice in German-speaking countries, ever since the Salzburg premiere). I thought I should miss the original text but this performance, in the presence of the composer, was such an extraordinary triumph that I soon forgot all about that, my sole reservation.

The Bavarian State Orchestra was nothing short of magnificent in what must rank as one of Henze’s most complex scores. Precision, tonal warmth, individuality, and blend: all were there, just as they would be in a great performance of Mahler, Strauss, Berg, or any other master of the late- or post-Romantic orchestra. The consoling sweetness of the violins during Pentheus’s final words astonished, coming as it did immediately following the furious Hunt of the Mænads. An excellent production touch was to place the trumpets on stage at the outset, so that one saw as well as heard the fanfares. It by now goes without saying that the musical contribution was flawless. The orchestra deserves a great deal of credit in itself, yet there can be no gainsaying Marc Albrecht’s role at its helm. Albrecht’s command of the score was at least as impressive as that of his father, Gerd, or that of Christoph von Dohnányi, in the two fine recordings this work has received. If anything, Albrecht fils might have had the edge. Dramatic drive and symphonic integrity – is there a more truly symphonic opera? – were never in opposition but, as they should, contributed to and intensified each other dialectically. I was gripped throughout and without exception. The magnificent contribution from the chorus, both dramatically and musically, was a crucial factor in this respect. Given how much its members had to do, one might have expected a little fatigue or routine to set in, but they were equally impressive individually and corporately.

The principal cast was very fine too. Eir Indehaug’s somewhat anonyomous Autonoe was the only slight disappointment but that was probably more a reflection upon the standard of the rest. Michael Volle was outstanding in the title role; such was his identification with Pentheus, musically and dramatically, that one could only believe that he actually was the tormented king of Thebes. Nikolai Schukoff was every bit as good as Dionysos, all too credible in his equally-tormented seduction of a people, born of revenge for his mother, Semele. I do not think I had previously encountered him; the loss is entirely mine, for his sinuous tenor, responsiveness to the text, and utterly convincing stage-presence mark him out as an important artist indeed. Gabriele Schnaut no longer possesses an alluring voice, if ever she did. She remains, however, an extraordinary stage animal, so much so that the wobble is rendered irrelevant. Her despair and anger at discovering that she had wrenched the head from her son’s shoulders was truly tragic. I can imagine her now taking on a second career á la Anja Silja, and doing extremely well. If this Tiresias is anything to go on, Reiner Goldberg is clearly prospering in character roles, although he was perhaps occasionally a little too loud – rarely a fault with such an orchestral battering taking place – as Calliope, during the intermezzo of Pentheus’s dream. (As an aside, I have never understood why ‘Venus’ rather than ‘Aphrodite’ appears here, but never mind.) Other than that, his contribution was both witty and moving. Sami Luttinen was every inch the tragic elder statesman and patriarch as Cadmus. Christian Rieger was another new name to me, but he was deeply impressive as the king’s trusted captain. He navigated with aplomb the potentially tricky transition to his role as Adonis during the dream sequence, before reverting with equal success to the prior role. Rieger is clearly a fine actor too. As for Hanna Schwarz in the wonderful role of Beroe, she threatened to steal the show every time she employed her still magnificently deep voice.

This production must be issued on DVD.
Posted by Mark Berry at 10:40 am