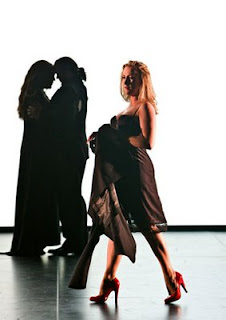 This was just the tonic following the relative disappointment of Arabella, the perfectly taken opportunity to restore my faith in Strauss and Hofmannsthal, with what is probably my favourite Strauss opera. Elektra may be the greatest but Ariadne auf Naxos approaches the magic of Così fan tutte, at least when performed as it should be. Yet this last of the festival's three premieres - the others having been Idomeneo and Doktor Faust - was no mere restorative: it was an unforgettable evening, probably my operatic highpoint so far for 2008.

Robert Carsen’s production is unquestionably the finest I have seen. It is by now relatively well established, at least amongst those productions that exist in the land of the theatrically alive, that the Prologue is an opportunity not only to show the making of the Opera, not only to show the making of an opera, but also to examine our attitudes, preconceptions, and prejudices. Vanities and other excesses were present but so was the genuine human enthusiasm so necessary to put together a show, which, when put together properly, can be one of the most wonderful experiences known to man. The production did all of this very well, without falling into unnecessary didacticism, and scored extra points by introducing the ballet corps as well: quite rightly, given the imaginative role it would be allotted during the Opera itself. Indeed, we saw the dancers warming up on stage as we took our seats in the theatre. Sparing use was made of the auditorium too, which involved the audience in the action without becoming tiresome. The relationship between the Composer and Zerbinetta was astutely moved into the foreground as the clutter of the rehearsal miraculously disappeared to focus upon their interaction. Manfred Voss’s lighting was extremely important here as elsewhere. And something simple yet extraordinarily powerful in context was the role allotted to the Composer from the moment the curtain went down upon the Prologue. Trapped on the other side of the curtain and stunned by the apparent desecration of his masterpiece, he found it within himself to walk round to the opening of the pit and to hand his score to the conductor. Thereafter, seated at the edge of the pit, he would watch the first performance of his work, be revisited by Zerbinetta, and finally, in what was arguably Carsen’s coup de théâtre, retreat to the suddenly revealed backstage, where the performers would congratulate each other and be congratulated by us. The lines, properly, were blurred.

At least an equal achievement and arguably greater was the treatment of the Opera. As I hinted above, one ought not to be able to go too far wrong with a treatment of the Prologue, given a degree of thought and theatrical imagination. (This has not, of course, prevented many from going far wrong indeed.) Yet how to present the Opera, especially how to build up to its conclusion, rather than having it seem bizarre or anti-climactic – neither of which it is – is probably the harder task. What one needs above all to do here is to listen to composer and librettist. They need not be slavishly followed but a sense of transformation, transfiguration even, is crucial. To a degree I do not recall experiencing before, Ariadne and Bacchus seemed real characters, not archetypes or cardboard cut-outs of ‘soprano’ and ‘tenor’. Of course, their relationship towards the vain artists we saw in the Prologue is important, but the magic of opera and of this Opera is how such failings may be put to good use. Zerbinetta played a crucial role in this respect, providing something of an example for Ariadne, persuading her – again to a degree that I do not recall from previous performances – that there may be something to be gained from taking a man after all. This need not be one of the host of dancers with whom Zerbinetta has so show-stoppingly played during her aria; such would hardly be proper for our princess. But Zerbinetta has ignited a change of heart or at least an openness to possibilities other than that of the departed Theseus. Ariadne must still go though her Brünnhilde’s awakening moment, frightened and repelled by her visitor, but the eventual outcome has been hinted at if not foretold. It is also stylishly mirrored in the male and female dancers who, during the final scene, come to reflect the actions of Ariadne and Bacchus. Once they have become real characters, this pair may then once again become more archetypal.

It is a somewhat false exercise to separate individual performances from the production, given how tightly integrated all aspects of this were, but I ought nevertheless now to turn to the performers themselves. My only slight doubt occurred at the beginning of the Overture, which sounded a little matter of fact. (Or maybe it was that I had not yet settled down to listen properly.) Thereafter, helped by the glorious acoustic of Munich’s Prinzregententheater – far superior, I think, to that of the far from negligible Nationaltheater – this would be a reading that exhibited a winning combination of clarity, warmth, flexibility, and narrative drive. One can hardly ask for more than that. This performance confirmed Kent Nagano as a Strauss conductor of the first order and the Bavarian State Orchestra as a Straussian instrument of at least equal rank. I shall not single out individual instruments or sections, since all were equally accomplished, but I shall note with pleasure how much one could hear of the piano and harmonium parts and not merely in their continuo role.

There was not a weak link in the cast, whether one considers the poise and athleticism of the dancers, superbly choreographed by Marco Santi, or, as I shall now do, the singers. All were fine singing actors but this should in no sense be taken to imply acted compensation for vocal shortcomings. Rather the musical and the theatrical acted in a truly complementary, indeed dialectical, fashion. Martin Gantner as the Music Master imparted wisdom to his Composer charge. In that crucial role, Daniela Sindram overcame a slight initial colourlessness, to inhabit the Composer’s person with moving credibility. Adrianne Pieczonka was a very fine Primadonna/Ariadne, who grew as her character did. Her voice was extremely beautiful throughout but the beauty was put to good dramatic ends. Likewise the most accomplished Najade, Dryade, and Echo, in the respective persons of Aga Mikolaj, Anaïk Morel, and Sine Bundgaard, I have ever heard. Burkhard Fritz was most convincing as the Tenor and hardly less so in the unenviable role of Bacchus. As I mentioned above, to have turned him into a real, flesh-and blood character is no mean achievement. Zerbinetta’s troupe did everything that could have been asked of it. All four of its members were fine singers and fine actors, utterly engaged and utterly engaging. Their several changes of costume astutely helped drive the narrative forward, for which many thanks to Falk Bauer. If I would single out Nikolay Borchev’s Harlequin, once again quite simply the finest I have seen and heard, that is probably more a consequence of the greater weight ascribed to the character in the work than of any manifest superiority in performance.

But it was Diana Damrau as Zerbinetta who delivered the absolute knock-out performance. Vocally and theatrically, it was of a level I doubt I shall ever witness again in the role. In lesser hands, her aria can become tedious as we wait for the preliminaries to be over and the coloratura to begin. Here, every aspect of what became a fully fledged scena, replete with full participation by the male dancers, Zerbinetta as their leading lady, was more compelling than one could ever imagine. She inhabited the text, the music, the production, and wrought true magic. No wonder the men stripped to their underwear as they sought to impress her, to win the contest for her favour. The give and take between singer and orchestra was every bit as impressive, leaving recollections of most other renderings seeming uninflected and downright unimaginative. Zerbinetta may have been in charge but this was not merely wilful; Damrau listened as well as led. Her aforementioned return to the watching Composer and the parodying of this action with her own troupe were strokes of theatrical genius too. This instance will give, I hope, some indication of how all aspects of the production were at one, so very much more than the sum of their parts. Any Straussian, any musician, or indeed any human being, should make strenuous efforts to share in this experience.
Posted by Mark Berry at 11:32 pm