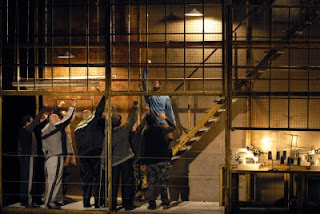 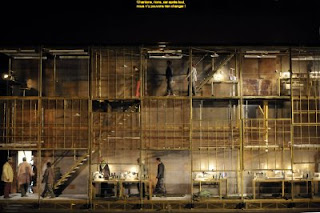 Ibn Zaydoun Chorus (director: Moneim Adwan)
Camerata Salzburg
Louis Langrée (conductor)
I had been looking forward to this: my first Zaide in the theatre, a controversial but undeniably talented director, and the open air of the courtyard to the archepiscopal palace in Aix. What unfolded was the stuff of nightmares: a production as crass as – if doubtless more well-meaning than – Jonathan Miller’s appalling travesty of Così fan tutte for the Royal Opera, albeit without the extraordinary musical redemption of Sir Colin Davis and his superlative cast.

That Zaide is a problem piece, no one would deny. The music is far too good to lie unperformed but it is frustratingly incomplete: something clearly must be done. It seems to me that there are three principal paths one could take. One could make a virtue of the incomplete nature of the ‘work’ as it stands, either by taking up and developing the theme of fragmentation. One might commission some new music and either provide it with a companion-piece (as the Salzburg Festival in 2006 did) or transform it into a new work. Or one could attempt to make it cohere as it stands, perhaps by adding further music by Mozart. The incidental music to Thamos, King of Egypt is a favoured candidate for this approach, and this is what happened here. Except that it did not. There was at root a glaring contradiction, perhaps resolvable or perhaps not, but certainly not resolved in this particular case, between a quasi-traditional path of Mozartian completion and Sellars’s understanding of the work.

There is nothing wrong in principle with providing a work with a new or modified message, although it needs to be done well – and rarely is. Sellars, however, actually seems to believe that Zaide itself is about what he decided to put on stage. I can say this with some confidence by virtue of his comments in the programme. Take the following extract from his ‘synopsis’, informing us what is going on in that most celebrated of the work’s arias, ‘Ruhe sanft’: ‘From her sewing machine above, Zaide (a Muslim) hears Gomatz struggle. She sings a lullaby to ease his pain and lowers his ID card to him, hoping her picture will bring him comfort and strength…’ Or this commentary on Osmin’s ‘Wer hungrig bei der Tafel sitzt’: ‘This escape is not a problem for Osmin. As a slave trader, his speciality is outsourcing and there is an endless supply of desperate people who will work under any conditions. From his point of view, Soliman is behaving like one big fool. Modern management techniques offer a huge profit from a disposable work force. The lesson is: if there is food, eat your fill.’ For Mozart, Sellars tells us, ‘belonged to a generation of artists, activists, intellectuals, and religious leaders who dedicated an important part of their œuvre to the abolition of slavery.’ This, apparently, is what the Enlightenment was about. Except it was not – and nor is Mozart’s unfinished Singspiel. Mozart was not the egalitarian Sellars explicitly calls him. A little while after composing the music to Zaide, Mozart dismissively reported to his father of Joseph II’s inclusion of the ‘Viennese rabble’ (Pöbel) at a Schönbrunn ball. Such rabble, he wrote, would always remain just that. This does not place Mozart at odds with the Enlightenment; it places him at its heart, along with Voltaire’s plea to his guests not to discuss the non-existence of God in front of the servants, lest the latter should forget their place. And as for the American plantations… The Enlightenment in general and Mozart in particular are far more complex than a modern, liberal American mind – or at least this one – appears able to comprehend. Hierarchy is sometimes undermined in Mozart’s operas but never to the extent of threatening the social order. Le nozze di Figaro is, after all, but a ‘folle journée’, from which most of Beaumarchais’s menacing rhetoric has been expunged.

It gets worse however, when Sellars comes to staging this misunderstanding. (Some misunderstandings can be fruitful, but not this.) Zaide takes place in a modern sweatshop, replete with the ‘ID cards’, ‘modern management techniques’, and so on, which I quoted above. Somehow the issue of Palestinian liberation becomes embroiled in this issue and that more broadly of modern slavery; it is all about ‘freedom’, I suppose. I hope that it should not need saying that I abhor all forms of slavery, ancient and modern, including the repression of Palestine, but that does not in itself make the issue relevant to an unfinished work which is about something quite different, nor to a production which, through its generally ‘right-on’ contradictions, could not make up its mind what it was really about. We therefore had a ‘chorus’ of six modern slaves traipse on to stage following the appropriated ‘overture’, for an oud – I think – to strike up by way of introduction to the harmless little song they presented. Mozart was then permitted to return, providing different music to what I believe were the same words. We never heard again from the Ibn Zaydoun chorus, associated with the admirable organisation Esclavage Tolérance Zéro, nor from the chorus’s director, Moneim Adwan. Their inclusion was offensively tokenistic and added nothing to the botched drama on stage; they sang well enough in an amateur fashion. The Aix audience was made to suffer ever so slightly by the turning on of glaring strobe lighting at the ends of musical numbers: irritating enough to be discourteous, and obscene if the suggestion were that we could in any sense thereby participate in the very real agonies of modern slavery, be it in a sweatshop or the Gaza Strip. East-West tension might fruitfully have been addressed in a work such as this, but here it was not.

Camerata Salzburg sounded as it generally does nowadays, post-Norrington. Sándor Végh would turn in his grave to hear the low-vibrato, short-bowed, small-in-number (7.6.5.4.2) string contribution, although there were moments when the section was allowed greater musical freedom. The opening bar confronted us with the perversely rasping sound of natural brass and with the ‘authentic’ bashing of hard sticks upon kettledrums. It was left to the superlative woodwind section to provide Mozartian consolation. Louis Langrée drove the score quite hard, sometimes with dramatic flair, often with a harshness that has no place in Mozart. He was able, however, to provide considerable dramatic continuity both within and between numbers. Perhaps surprisingly, the Thamos items often fared better.
There were some promising young voices on stage, although they had a tendency to present excessively broad-brushed, unshaded interpretations – and were sometimes just far too loud. Sean Panikkar possesses a winningly ardent tenor, which impressed more in the first than in the second act. Thankfully he had more to do in the first. Alfred Walker was dignified earlier on but subsequently unfocused. What were we to make of Ekaterina Lekhina in the title role? She delivered her second act arias rather well, but was all over the place in ‘Ruhe sanft’: tremulous and out-of-tune in an almost caricatured ‘operatic’ fashion. More worryingly, why was she, a Russian soprano, included in what was otherwise clearly a purposely-selected non-white cast? I cannot for one moment imagine that this was the intention, but I almost had the impression that here was a white woman, threatened and surrounded by coloured men. Whatever the actual intention was, I am afraid that it entirely eluded me. The impression of abject incoherence was nevertheless intensified still further. I think that I have now said enough.
Posted by Mark Berry at 12:05 am