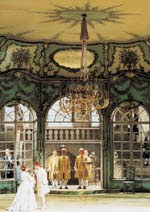 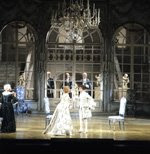 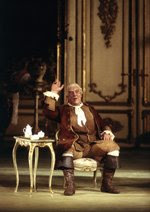 I tend to be sceptical about the repertory system. Vienna’s Ariadne auf Naxos certainly confirmed me in my scepticism: devoid of theatrical values and not so good musically either. Yet whilst it would be absurd to claim that this production – which appears more or less to play itself – presented any breathtaking insights into Der Rosenkavalier, it was interesting to note a greater degree of theatrical engagement in a satisfactory visual presentation. It is set where it 'should be' and the stage directions seem to be followed punctiliously. That alas, is all; there is not a hint of critical engagement, of any consideration of what the opera might actually be about. Many opera-lovers across the world will have seen it before, if not in Munich, then on the DVD conducted by Carlos Kleiber. Nothing much seemed to have changed – either for good or for ill. I was slightly alarmed by the applause – shades of the Met? – the set for Faninal’s palace received as the curtain rose for the second act but it was a minority affair. I can only recall one (relatively) radical reimagining of this opera, Robert Carsen’s brilliant production for Salzburg in 2004. That was theatre at a far higher level than I have otherwise seen, but Rosenkavalier does not, perhaps, suffer unduly from even the most ‘traditional’ of productions: a tribute, I think, as much to Hofmannsthal as to Strauss (although, as a non-German, I occasionally curse the former for the difficulty of his text). Whether I shall think differently when I have seen more productions in the theatre: watch this space...

This performance, which opened the Munich Opera Festival’s ‘Richard Strauss Woche’, was dedicated to the memory of Joseph Keilberth, on the fortieth anniversary, to the day, of his death. I suspect that Keilberth – newly and surprisingly fashionable, in the wake of the release of his Bayreuth Ring – would have imparted a stronger symphonic line to the score, but this was not entirely absent in Peter Schneider’s account. In contrast to the previous occasion when I had heard Schneider conduct the work – that Salzburg Rosenkavalier – the more modernistic aspects of the score were generally downplayed and there was a considerable degree of indulgence. Rosenkavalier can take quite a bit of that, of course, but I think it emerges more strongly when an embargo is placed upon the sentimental. (Some of it will seep through in any case.) Schneider – or was it Angela Denoke? – set a daringly slow pace for the Marschallin’s ‘Hab’s mir’s gelobt’, which worked astonishingly well, but there were also instances in which longueurs were underlined rather than dealt with. The exchanges between the Marschallin, Octavian, and Sophie, leading up to that point, seemed to go on forever. Whilst the Bavarian State Orchestra generally sounded very good, often excellent, there was little that was so truly exceptional as there had been for the previous night’s Die Bassariden. One can be spoilt, however.

The cast was mostly good and sometimes more than that. Denoke was wonderful as the Marschallin. During the first act, I missed some of the sheer beauty of tone one has come to expect in this role from great interpreters of the past – or even the present. Yet I think she grew in stature in this respect, especially by the time of the Trio, and she proved herself throughout a great singing actress. If she could not make that final 'Ja, ja,' touch as only Elisabeth Schwarzkopf could, that is certainly no fault of Denoke's. Her Octavian, Anke Vondung, was good but a considerable distance from unforgettable. Again, we have probably been spoilt in this respect, where the competition – horrible but unavoidable word – is so horrendously fierce. Chen Reiss’s Sophie, however, was extremely fine. She even almost made me suspend my disbelief that anyone could be so foolish as to choose that annoying bourgeois girl over one of the most adorable characters in all opera. Reiss, whom I had not previously encountered, possesses a beautiful voice and employed it to great advantage. If one could not hear every word, then one does not expect to do so for a Strauss soprano. John Tomlinson was a magnificenty hammy Ochs. I suspect that the composer would have found his turn exaggerated – Strauss’s writings certainly suggest so – but one could not resist this larger-than-life portrayal. It probably goes without saying, though should not, that one had no difficulty in hearing every word of his text. I should find it difficult to become excited about a Faninal, but Eike Wilm Schulte did a good job in his role. The Italians were excellent: grotesque, but not merely caricatured. My only real disappointment lay with Piotr Beczala’s Italian tenor. Strauss’s affectionate parody of Italian opera requires greater sweetness of tone than it received here. Perhaps he was simply having an off day. The rest of the cast worked well as a company, which is perhaps the key to the general success of the performance.
Posted by Mark Berry at 11:49 pm