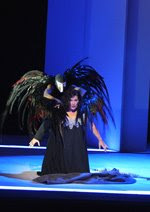 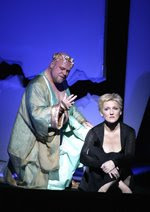 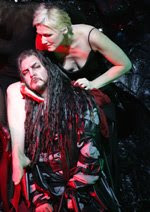 And so, ‘Richard Strauss Woche’ concluded with Salome, the first Strauss operatic masterpiece. In 2006, this double-bill with Wolfgang Rihm’s Das Gehege (‘The Enclosure’) had inaugurated Kent Nagano’s music directorship. I thought it a reasonable performance, more so in musical than stage terms, but nowhere near so good as the festival’s superlative Ariadne auf Naxos.

It was certainly interesting to make the acquaintance of Das Gehege. Based upon a story extracted from Botho Strauss, the action runs as follows (I quote from the programme synopsis):

A woman comes out of the darkness. It is night and the woman is alone. She arrives at the zoo. She speaks to the golden eagle in his aviary, takes a knife, frees the bird and admires the eagle’s body. She challenges the eagle to attack her. She mocks it. The more she irritates the eagle, the closer it comes to her. When the woman realises how old and powerless the bird is, she feels superior to it. The eagle pounces on her; she kills it.

The eagle’s is an unspoken part, so this is essentially a Schoenbergian monodrama. Gabriele Schnaut, creator of the role, was certainly more suited to it than she had been to that of Elektra. The vocalism remained flawed but her prowess as a singing actress was generally compensation enough. Nagano and the Bavarian State Orchestra sounded fully at home with Rihm’s language, which, the odd instance of extended instrumental technique notwithstanding, should not frighten away anyone who has come to terms with Berg. The composer can certainly write for orchestra, evincing an almost Henze-like fluency in that respect, replete with reminiscences and evocations of the dance and of the natural world. He also plots a convincing vocal-dramatic line. There are inevitably shades of Erwartung, although I do not think the newer work would come off so well in a straight comparison, for Schoenberg’s score is infinitely more complex. Rihm’s broader brush strokes might well seem a little too obvious – and generalised. William Friedkin’s production emphasised the psychological rather than the political. This seemed something of a missed opportunity, given the original play’s status as something of a commentary upon the fall of the Berlin Wall and reunification. In Germany, an eagle will rarely if ever just be an eagle. The production was unexceptionable on its own terms, although the stage direction itself seemed uninspired and unduly reliant upon Schnaut’s charisma; it is unclear that a concert performance would have been in any sense inferior. As a companion piece for Salome, Rihm’s piece works well enough, although I see no reason why it should be restricted to this role.

Nagano’s reading of Strauss's score lacked the magical delight of his Ariadne. It was an analytical account, bringing certain neglected lines to the fore, but at times a little deficient in dramatic thrust. Still, the orchestra sounded excellent on his terms. I had expected great things of Angela Denoke as Salome. Judging by the audience’s reaction, it believed it had heard them; however, I was less sure. Although she is possessed of a great stage presence and certainly used it on this occasion, there were times when she sounded vocally overwhelmed. I was delighted that she did not merely belt out the part after the all-too-approximate manner of Schnaut as Elektra, yet equally – and perhaps surprisingly – the Marschallin had seemed more suited to her. There was intelligent shading but sometimes a lack not only of power but also of sustained line. Alan Held passed muster as John the Baptist but did little more than that. Wolfgang Schmidt, whom I had last heard as a none-too-successful Siegfried, presented a somewhat caricatured but nevertheless perfectly reasonable Herod. Iris Vermillion sounded a bit out of sorts as his consort, although she certainly looked the part. Daniela Sindram was a truly excellent page to her. As Narraboth, Wookyung Kim wooed with his voice, but seemed a little at sea as an actor. The Jews and Nazarenes were an impressive bunch, both individually and as a whole, although Friedkin seemed to think them more important than they were. His would-be provocateur ‘Angel of Death’, the same actor and costume as the Eagle, was little more than a visual irritant.

Indeed, the greatest failing lay with the production. It sounds all too predictable to say this, but Friedkin seemed constrained by cinematic thinking, unable to accept the suggestive possibilities of the stage. Scene changes were all too frequent and all too pseudo-realistic. The Personenregie seemed almost quaint, reliant upon hammy stock gestures, that is, when it was not merely absent. Despite the partial nudity of Salome from her dance onwards, there was nary a trace of the erotic. For that, one had to turn, sometimes more successfully than others, to the pit. Nagano is on record as saying, quite rightly, that opera is first and foremost musical theatre, but I cannot believe that he meant this should be by default. For an example of theatre truly growing out of the music – and a tremendous musical performance – turn to Ariadne instead.
Posted by Mark Berry at 3:14 pm