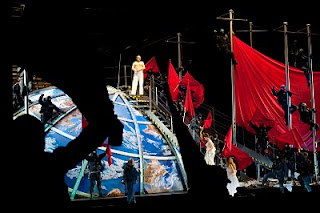 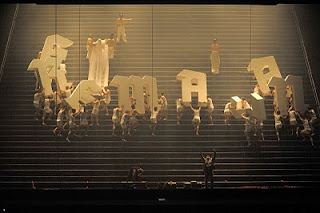 The beginning of a new Ring will always be an event but is perhaps even more so in Paris. The Paris Opéra itself has not presented a complete cycle since 1957, reaching only as far as Die Walküre under Solti in 1976 – and even then, the company was still exclusively ensconced at the Palais Garnier, as opposed to its present day split between the old theatre and François Mitterand’s Opéra Bastille. There have been more recent performances of the tetralogy, however, at the Théâtre des Champs-Elysées and the Châtelet. The city so important to understanding Wagner, the city for which he notoriously prescribed a ‘fire cure’ and which punished him more than handsomely with the Tannhäuser debacle, has never been short of Wagnerians and has equally never been short of opponents. There is, of course, nothing more Parisian than an artistic ‘controversy’ (consider the Querelle des bouffons) or ‘case’: was Nietzsche more décadent than he knew? Perhaps surprisingly, that arch-controversialist Gérard Mortier never, during his reign at the Bastille rose to this ultimate challenge pour épater les bourgeois, but the new directorate of Nicolas Jöel and Philippe Jordan, the latter already a Wagner conductor of considerable experience, has. Das Rheingold and Die Walküre are presented this season; Siegfried and Götterdämmerung are scheduled for next.


I had felt somewhat nonplussed by earlier work I had seen from director Günter Krämer. At the 2002 Salzburg Festival, I was grateful enough for the chance to hear Strauss’s ‘cheerful mythology’, Die Liebe der Danae, still more so from the Staatskapelle Dresden and Fabio Luisi, but the production seemed to do little other than to present each act at a different stage of the work’s history: the 1944 dress rehearsal, the ‘true’ premiere of 1952, and the revival fifty years hence. Tristan, which I saw in Vienna in 2008, I found still less revealing: unobjectionable, but nothing more. By contrast, this Rheingold is really rather good: red in tooth and claw, as befits the least ambiguously socialist of all Wagner’s stage works. The staging is recognisably post-Chéreau – what could it mean to attempt to be pre-Chéreau? – and certainly shares ideas with other productions, but I see no harm in that. It generally works as a synthesis, and some of the greatest artists and thinkers have had abilities at least as much synthetic as ‘original’: for instance, Marx, who looms large here. (The programme misleads in straightforwardly describing Wagner (p.86) as ‘lecteur de Marx’. He may well have been; indeed, I should wager that he was. However, short of new documentary evidence coming to light, we cannot say for certain.) And Wagner as a thinker was certainly synthetic in tendency, if not always in achievement, nowhere more interesting than in the contradictions this might present.

Though we have seen the Rhinemaidens as ladies of the night before, the direction on stage makes this credible theatrically as well as a good idea. (I am trying not to shudder excessively at memories of the embarrassing pole-dancing experiment from Phyllida Lloyd for the English National Opera.) Alberich is a dwarf too, for those who treasure stage directions – and he certainly should be a misfit in a trivial world where one is judged solely on appearances. Krämer recognises that there is no golden age for Wagner: the composer, often even in this work a Schopenhauerian avant la lettre, presents an almost Hobbesian initial state of nature and a Fall that is anything but a felix culpa. That the post-lapsarian world is still worse than its predecessor does not detract from the latter’s amorality. Diego Leetz’s lighting works well in suggesting a Rhine of sorts. This first scene, then, seems to me a model of what Warren Darcy has called a ‘tragedy in miniature’.

I was disappointed at the abruptness of the scene shift that followed: at odds with one of the supreme examples of Wagner’s ‘most delicate and profound’ art of transition, that of Alberich’s ring into Wotan’s Valhalla. We see the site for the latter, though not of course the completed version, too early. What is being built is, with perhaps unduly heavy-handed reference to the Third Reich, GERMANIA, whose capital – in more than one sense – construction, grandiose as the drama’s conclusion, we witness as the evening progresses. Portrayal of the gods is imaginative. Their idealistic physique – muscles for the men, breasts for the women – is clearly constructed, in that they wear these, and one is intended to see that they are not ‘natural’. This certainly fits with Feuerbach’s conception, so important to Wagner, of religion alienating human qualities onto a projected godhead and thereby impoverishing life on earth. The appendages are lost when Freia and her golden apples are captured, and put back on upon her return to the fold. It is not quite clear to me, however, why Wotan does not suffer this fate. Loge, as so often, steals the show. Initially more than a little camp, the outsider, brilliantly portrayed by Kim Begley, soon throws caution to the wind as a fully-fledged drag artiste.

Nibelheim comes across well, especially its centrepiece golden globe hoard and the equally striking pendulum-like cutting mechanism that swings throughout. The wonder and tawdriness of the magic trick are presented in Alberich’s Tarnhelm transformations: we know that he is hiding behind the ball; yet we see and hear that others believe something else. Moreover, we witness the brute power wielded over the Nibelungs, since these are cowering characters on stage. Wotan’s wresting of the ring from the dwarf, one of the truly terrible moments in the cycle, most certainly is here: the violent, bloody loss of the finger realistic and prescient as Alberich’s curse itself. Then there are the giants. Initially they appear with socialist propaganda followed – this a coup de théâtre – by a threatening band of angry proletarians, who burst into the audience, dispensing red sheets, inscribed with Fasolt’s fundamental denunciation of Wotan: ‘Was du bist, bist du nur durch Verträge.’ (‘What you are, you are through contracts alone.) Not a bad agitprop slogan, and in a nice touch, Fricka peruses what seems to be a fuller prospectus of the workers’ programme. The subsequent portrayal of Fafner chills. A construction union boss, we see in the fourth scene that he is more inhuman than the gods, savagely wielding and employing his whip when duly strengthened by possession of the ring. (I could not help but think of the leaders of UNITE, drawing salaries not so very far off the executives they excoriate.) Also memorable, with attendant change of pace, is Erda’s scene, in which, clad as a Victorian matriarch, she slowly traverses the stage as she delivers her warning: simple but effective. She watches beforehand, which perhaps serves no particular purpose but, by the same token, does no especial harm.

Begley was perhaps the star performer, sardonic and with a perfect sense of timing, but the cast in general impressed. Peter Sidhom does not possess the largest of voices for Alberich, but he cleverly used what he has. Iain Paterson and Günther Groissböck clearly differentiated between Fafner and Fasolt, the vocal and scenic realisation properly increasing as the drama progressed. Qiu Lin Zhang suffered from bad intonation at her entry as Erda, but recovered with nobility. Falk Struckmann was variable as Wotan, always attentive to the words but sometimes a little underwhelming vocally, apparently pushing him to be a bit too much of an ‘actor’ on stage. Sophie Koch had something of the sphinx’s enigmatic quality to the god’s attractively sung and played consort: more interesting than something too overtly shrew-like. Marcel Reijans displayed an attractive lyric tenor as Froh. The Rhinemaidens were of somewhat uneven quality, at least in vocal terms.

Underpinning this all, however, was the first-rate orchestral contribution. The orchestra of the Opéra national de Paris sounded surprisingly – welcomely – ‘German’ in tone, doubtless in partial consequence of Philippe Jordan’s experience in German houses, not least the Berlin Staatsoper. The blend was impressive, sometimes reminiscent of Karajan’s favoured Wagner sound. This rendered the novelty – in historical terms – of Wagner’s brass writing telling, but subtly so. The only real disappointment was the feebleness of the anvils. For Jordan’s command of the work’s vast structure one could certainly forgive that. He certainly has the measure of the work’s ebb and flow, of the orchestra’s role as Greek chorus; I have heard him do nothing finer. Indeed, all told, this was the best Rheingold I have attended since Haitink’s tenure at the Royal Opera. Die Walküre is eagerly anticipated.
Posted by Mark Berry at 12:24 pm