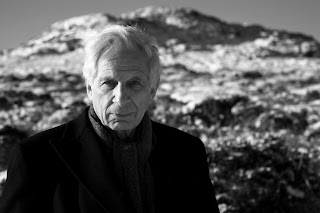 
Tomorrow will witness what promises one of the most important musical events of the year, the first performance of a new opera by Alexander Goehr. Promised End has all the makings of a testament, though there is of course no reason to believe that Goehr will not be composing for many years to come. It is a bold composer who tackles King Lear, but the late Frank Kermode was at hand to assemble the libretto from Shakespeare. English Touring Opera's initiative is equally bold; the company will stage four performances from director James Conway at the Royal Opera House's Linbury Studio Theatre, before moving on to Malvern, Bexhill, Exeter, Crawley, Cambridge, and Snape Maltings. Tour details may be found by clicking here. Ryan Wigglesworth will conduct the excellent Aurora Orchestra. The Cambridge performances should be special indeed, marking a homecoming for composer, librettist, and indeed conductor.

Sandy Goehr's lectures were a formative experience during my time at Cambridge. Though reading history, I was always keen to smuggle in as much music and philosophy (though certainly not 'Cambridge philosophy') as I could. At any rate, there was a definite spring in my step as I made the very short walk across from the History Faculty to the Music Faculty to hear analyses of Wozzeck, The Rite of Spring, and so forth. It is often fascinating to hear composers talk about music they esteem, but to hear such works taken to pieces and put back together again by a master analyst with a composer's insight was a special, enlightening experience indeed. Two of Goehr's - and his father's - especial passions, the music of Monteverdi and Schoenberg, coincided with two of mine as a research student. (Walter Goehr, a pupil of Schoenberg, conducted the first British performance of the Monteverdi Vespers, in York Minster.) When I wrote to him, asking about his father's Monteverdi performances, he generously sent me cassette recordings, including L'incoronazione di Poppea with the Philharmonia Orchestra. Goehr fils's own recomposition of the lost Arianna, with Kathleen Ferrier's crackly lament at his heart, became an object of fascination and indeed love.

Conversations concerning Monteverdi and Schoenberg have always been of inestimable value to me, the latter especially helpful for my own work on Moses und Aron. Indeed, one might even go so far as to suggest that there is something of that opera's dialectical antagonists in the influence and voices of both those composers, individually and when opposed to each other. Apropos Moses, the cantata The Death of Moses is another fine work, engaging with the extraordinary power and hold of Schoenberg's legacy with means that have something also of Monteverdi to them. I recall a Cambridge performance conducted by Stephen Cleobury, dedicated to the memory of Yehudi Menuhin, who had died that day.


But my first encounter, I think, with Alexander and Walter Goehr was in the sixth form, when my late music teacher, who perhaps has the greatest claim as a formative influence upon me, gave me a copy of their joint essay, 'Arnold Schoenberg's Development towards the Twelve-Tone System'. I read it and re-read it, and suddenly found that what I was grappling towards as a listener, increasingly obsessed with Schoenberg and his music, I could now understand intellectually, and especially historically. I therefore could listen all the more acutely and happily.

Anyone wanting a 'way in' could do no better than start with that essay and Charles Rosen's Schoenberg. Schoenberg's music truly became a joy for me at this time, a joy that has never departed. (An interesting parallel presents itself to my mind when writing this: one of my A-level set works was the Monteverdi Vespers, another joy that has persisted and intensified.) Goehr is above all, of course, a composer, but, like his fellow Messiaen pupil, Pierre Boulez, he is very much more than that - which redounds to the benefit of the music. Speaking of Boulez, further mandatory reading is 'A Letter to Pierre Boulez,' (1987) as sharp an assessment of divergent post-war musical currents as I know. Goehr considers how, in his words, how he was 'led ... away from what was later to be seen as the "classical" avant-garde position,' making 'my music of no interest to, though not free of the influence of, Boulez.' This, the Schoenberg piece, and other essays, may be found in Finding the Key: Selected Writings of Alexander Goehr, published by Faber. I can recommend them as heartily as Arianna.

I have no idea, of course, what we shall hear tomorrow. The few words above, however, may give some indication of why my hopes are high. In the meantime, here is a wealth of material on Goehr's earlier operas, including excerpts, and below is the beginning of a short interview between composer and director concerning the new work.

The remainder of the interview may be found on Youtube.
Posted by Mark Berry at 11:08 pm