It is not often with a work such as Tristan und Isolde that I read the synopsis. I flatter myself that I know the plot inside out and it is anyway hardly the thing. Wagner acknowledged this when providing his own summary in 1859. He did not even mention King Mark’s forgiveness: the action, he seems to claim, is not really of this phenomenal world at all, but metaphysical. Even Tristan’s agonies go unmentioned on the way to ‘redemption: death, dying, destruction, never more to waken!’. I happened, however, to glance at the programme synopsis afterwards. The production made more sense, at least on its own terms, for the recounting was of Claus Guth’s Tristan, not Richard Wagner’s. It begins:

Isolde is about to marry Marke, who is much older than she is. Powerless, she has to accept the match, which his nephew Tristan has arranged for social reasons. Brangäne, who is aware of Isolde’s desperation, argues with the voice of reason that, in her eyes, Isolde’s union with Marke, a high-ranking personage, can only be advantageous.


Wagner, it is true, points in his summary, to the ‘custom of the time’ leading to the sin of marriage for politics’ sake. Yet that comes very much as background and remains in any case quite different from this banal, updated foregrounding. Isolde, we learn, ‘refuses to go to the altar with Marke before she and Tristan have spoken openly with each other’. Kareol is merely referred to as the ‘house’ of Tristan’s father. Metaphysics are banished, just as in Christof Loy’s Royal Opera production, which in retrospect now seems to echo, wittingly or otherwise, Guth’s adaptation, first staged in 2008.

Tristan is rendered as a bourgeois drama, somewhat in the manner of Ibsen. The coup de théâtre is Christian Schmidt’s stage design for the first act, clearly the Villa Wesendonck, Isolde/Mathilde gazing from her bedroom window. Local references seem a current preoccupation for Guth; (his recent Ariadne auf Naxos was set in a celebrated Zurich coffee house). Yet the Wagner–Wesendonck soap opera is neither maintained, nor discarded en route to universal significance. For the first two acts, we remain within this ‘house’ and its garden, its Treibhaus hothouse plants evocative, but the Konzept is arrived at and only half-heartedly pursued. Even had the idea been more clearly developed, I doubt it would have worked, for it appears – and this is not an absolute statement, merely an observation based upon experience – that productions which try to make this particular work ‘about’ something other than its inner drama simply do not work. (Harry Kupfer recognises this in his 2000 production for the Berlin Staatsoper. He incorporates but does not fetishise nineteenth-century references, which remain at the service of Wagner’s drama. Kupfer’s centrepiece for each act, a fallen angel, with a Victorian touch of ‘bad nineteenth century’ such as Thomas Mann would surely have appreciated, is more importantly a revolving space for the true, inner action, and an ever-present reminder of the fallen human condition.) Leaving aside the unfortunate failure of the revolving stage equipment on one occasion, Guth’s setting is both unduly prominent and apparently lacking in further or deeper meaning. Touches such as Tristan turning an electric light switch on and off at the end of the first act – how technologically advanced was the Wesendonck household? – merely add irritating distraction; if a metaphor for Day and Night were intended, one could do better. I could not fathom why Isolde and Brangäne should be portrayed as near-identical, nor why they acted reciprocally as maid.

Regarding the general idea, one might claim that Hans Jürgen Syberberg does something similar in his Parsifal film, introducing imagery from the writing of the drama and more generally from Wagner’s life, for instance the window from the room of the Venetian Palazzo Vendramin in which Wagner died. Yet Syberberg offers a multiplicity of settings and ideas – a problem for some, but a different problem – and is anything but reductive. Moreover, Parsifal is not Tristan. Guth is a director I have admired, his Salzburg Festival Figaro being far and away the best production I have seen of the work. More recently, though, not least in the remaining instalments of his Salzburg Da Ponte trilogy, his ideas have confused rather than illuminated. Bizarrely, he reverts to the discredited notion of omitting the final scene of Don Giovanni, yet in a production with little of the Romantic to it. That anti-Figaro is certainly not faithful to the spirit, let alone the letter, of the work, yet somehow its Ibsen-reworking works. This Tristan does not.

There had been plenty of musical drama during rehearsals. Waltraud Meier departed after ‘artistic differences’ with Bernard Haitink, to be replaced by Barbara Schneider-Hofstetter. Her voice did not sound especially appropriate as Isolde, possessing a distinctly mezzo-like tinta, vocally indistinct from that of Michelle Breedt’s Brangäne. One might, given the mysterious mirroring of the characters onstage, have thought that the point; yet, given the late substitution, that seems unlikely. Martin Gantner’s Kurwenal also sounded oddly cast initially; yet, despite a voice of tenor-like hue, he convinced with properly moving fidelity. Peter Seiffert fell ill and was replaced by Stig Andersen, whose Tristan would have impressed even had he initially been cast. Vocally and textually accurate throughout, he not only possessed the stamina to get through the third act, but vividly portrayed agonies, both physical and metaphysical, lacking in the staging. Matti Salminen’s King Mark wavered a little during the second act, but his forgiveness – Wagner was wrong after all – was truly, almost unbearably moving:; the voice of experience told and intensified. Bar an unnervingly out-of-tune Sailor, the smaller parts were well enough taken, Joa Helgesson imparting a winningly forthright quality to the tiny role of the Steersman. 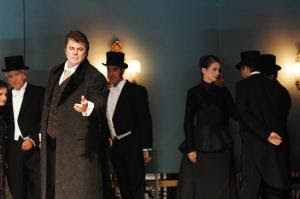 What made this Tristan unforgettable, however, was Haitink. The contrast between his and even the better renditions I have heard in between his final Covent Garden performance and now was stark, the unfolding of Wagner’s music drama paced to perfection. Whereas, following Esa-Pekka Salonen’s recent performance with the Philharmonia, I was intrigued to find the score sounding less tonal, more proto-Schoenbergian, in conception than usual, here Wagner’s motivic web and vast tonal plan were invested with conviction and meaning at every turn. This was not, as Haitink’s detractors have sometimes claimed, a reading of ‘absolute music.’ Terror instilled during the first scene of the third act was clearly derived from words and music, or rather from their indissoluble union; especially telling was the rhythmic drive, not excitable but clearly grounded in harmonic rhythm. Wagnerian melos, without which any performance will be in vain, emerged unchallenged as the guiding thread through the chromatic labyrinth. There were occasions when the Zurich Opera Orchestra sounded tired, likewise when strings gained an edge to their tone. If Haitink was better served vocally in Zurich than in London, the Orchestra of the Royal Opera House’s contribution had been significantly superior. There was, moreover, something odd about the second-act offstage horns, sounding almost as if relayed electronically. Nevertheless, the orchestra was generally able to execute Haitink’s vision; the rest could be readily forgotten. Truly, one would have to go back to Furtwängler to hear Wagner conducting so exalted. Let us hope yet to hear more Wagner from Haitink.
Posted by Mark Berry at 11:14 am