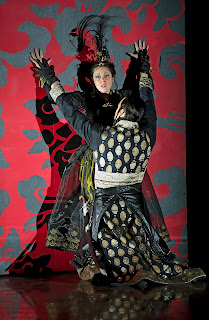 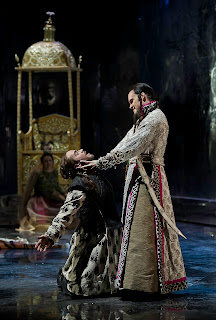 The English National Opera is to be congratulated for its enterprise, this time in mounting its first production of Handel’s Radamisto, written for the Royal Academy of Music in 1720. ENO performed it more or less in the revised version Handel prepared for the King’s Theatre in December that year for the castrato, Senesino. This was doubtless a good call, not least given that the revised version boasts a vocal quartet: dramatically impressive in itself but also providing welcome respite from the stream of recitatives and da capo arias. Radamisto’s three acts were transformed by ENO into two – no harm done there – and cuts were made. I thought it a pity to lose the ballet music, but everyone will have his own ideas about what should remain and what should be lost, and a ‘complete’ version, even if we could agree on what that might be, is not always the best way into opera seria. (A further, 1728 revision is generally held to have weakened the work.)
David Alden has directed Handel at the Coliseum and elsewhere before. His is not an imitative vision of the Baroque; however, it clearly finds inspiration in some of its conventions, whilst disregarding others. Stylisation is part of the game, with nods, arguably more than nods, to Japanese theatre: a feature of the Göttingen and Edinburgh Festivals’ recent Admeto too. Such, for instance, was the waving of a black, silken sheet, which would have appeared stylish, mannered, or a little close to the world of am-dram, according to taste. Much the same might be said of Gideon Davey’s set designs, whose patterns veered between Central Asia, tilting towards the Mogul khanate, the Sainte-Chapelle, and a certain form of wrapping paper. Rick Fisher’s lighting was generally revealing. Opinions will be divided as to whether the combination of stylisation with more ‘modern’ scurrying about and sexual teasing is provocative or misguided. It can work, but there were occasions when it seemed more concerned to bring attention to itself than to illuminate the drama, such as it is. I was definitely unconvinced, however, by the general tenor of the production’s Orientalism. Yet again, I was left wondering whether those concerned had read Edward Said: his work may not be the last word on the subject, but it is a useful first few. Presentation of oriental despotism is part of the work, of course, though as usual, it is matters of family and love that are truly to the fore. Is it really necessary, though, to add a cast of ‘sinister’-looking actors, faces and bodies covered, in a manner that has uncomfortable contemporary resonances for a modern audience? It would doubtless be possible to make something of this, but it seemed more a matter of evoking an exotic atmosphere than anything else. 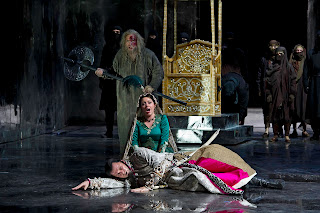 Laurence Cummings generally paced the action appositely. The overture did not bode well, its quick section taken at a breakneck speed, but thereafter there was considerable variation, some recitatives as well as arias taken surprisingly slowly. I could not help longing for a larger string section and one that was permitted a broader expressive palette, but we stood some distance from the wilder shores of astringency. Woodwind and brass were on especially good form. Handel often has a good line in bassoon colouring – a favourite instance of mine is the Witch of Endor’s music in Saul – and this shone through more than once. The military music was well done, harking back to Purcell: never a bad thing. It was a treat also to hear the horns in Tiridate’s ‘Alzo il volo di mia fima,’ the first occasion, Jonathan Keates’s notes informed us, in which they were employed for a London theatre orchestra. There were a few strange sound ‘effects’. I did not mind at all, though I can imagine that Sir Thomas Beecham’s ‘drowsy armchair purists’ might have objected – and there can be no doubt that they are very much in the ascendant today.

Singing was generally of a high standard. Lawrence Zazzo shone in the title role, a worthy successor to Senesino. His dazzling coloratura was second to none – and he can act too: all that, without the old-fashioned ‘hoot’ of yesteryear’s countertenors. Christine Rice brought her customary warm tone and musical intelligence to the role of his consort, and Sophie Bevan was at least as impressive as his unlucky sister, Polissena: expressive, but never inappropriately so. Ryan McKinny made a malevolent Tiridate, virile up to a point, but tellingly weak where and when it mattered. He has stage presence and used it wisely. Henry Waddington had to deal with a costume and general appearance that made his Farassane a visual cross between Mussorgskian mendicant and Beckettian tramp; nevertheless, he made something of the character as well as proving firm and deep of voice. The only fly in the ointment was Ailish Tynan’s Tigrane, unfortunately cast visually and vocally. Intonation was not always perfect elsewhere – though I do not recall hearing a single slip from Zazzo – but in her case, tuning was often wildly awry. Even when leaving upon one side the bizarre Tommy Cooper get-up selected for the character – I assume this was intended, though goodness knows why, to be amusing – it was difficult to imagine that this was a Prince of Pontus. There is no reason whatsoever why a woman should not sing the role, as happened on the premiere of the original though not this revised version. However, on this occasion, one was led to think that a countertenor would have been more appropriate. Handel cut the role of Fraarte, Tiridate’s brother, for this version. 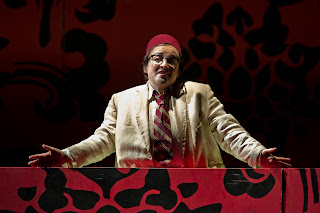 This being the sort of opera it is, we knew, even without forewarning, how everything was going to turn out. All’s well that ends well. The reversal of fortune and the tyrant’s change of heart are not the most convincing, but there is little we can do about that. Handel has some fine music indeed here, though dramatically, like all his operas, it falls short of his great oratorios. Once more, however, it is a matter of congratulation for ENO that it should have decided to stage the work. It was also a good thing yet again to note the presence of the company's Music Director in the audience: he is clearly more than a principal conductor.