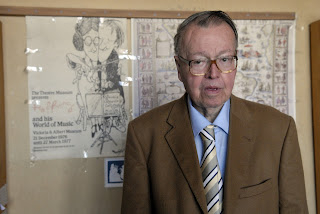 News just in from Leipzig: the director Joachim Herz has died today (18 October). His 1973-76 Ring for Oper Leipzig, where he served as director of opera from 1959 to 1976, presaged the more celebrated Bayreuth 'Centenary Ring' of Patrice Chéreau. Wagner as a serious, sophisticated critic of modern capitalism was on stage – and would not easily be pushed away again, however much devotees of horns and helmets might wish otherwise. Herz bravely, however, dissociated Wagner from Marxism too, not least in his crucial decision to leave the end of Götterdämmerung open (again, compare the ‘watchers’ in Chéreau); he therefore came in for considerable criticism from more doctrinaire commentators, of whom there were many. Nevertheless, Der Union, a Dresden newspaper, went so far as to declare that Leipzig had overtaken Bayreuth, and that the focus of Wagner interpretation had passed from West Germany to its socialist confrere. (For more on the production and reactions to it, see Patrick Carnegy's excellent history of Wagner production, Wagner and the Art of the Theatre


In 1976, Herz would succeed Walter Felsenstein at the Komische Oper, Berlin. For a director in the GDR, Brecht could hardly fail to loom large, of course - and he already had in Herz's Ring. Here is a clip from Herz’s Aufstieg und Fall der Stadt Mahagonny:
And here, an example of Herz's work in rather different repertoire:
Posted by Mark Berry at 7:43 pm