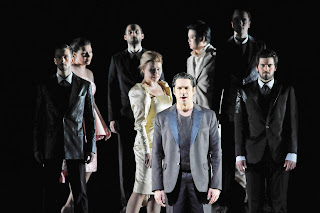 
This new production was trumpeted as a Don Giovanni for Berlin. Some points in the proclamation were more persuasive than others. In 1954, Brecht inaugurated the new home for his Berliner Ensemble at the Schiffbauerdamm with Molière’s Don Juan, whilst Heiner Müller would follow in those footsteps in 1968. Meanwhile, in West Berlin, a month after the construction of the Berlin Wall, the newly constructed home for the Deutsche Oper would open with Don Giovanni. Fifty years later, and twenty-one years after the Wall’s demise, comes a new production. I am not sure this adds up to a great deal, for one could doubtless point to precedents and numbers of years since something else for just about anything. But Roland Schwab’s production tries to locate itself more explicitly in Berlin: Berlin as a clubbing mecca. Localism seems to be the new, or at least a new, universalism at the moment, as evidenced by Claus Guth’s recent Zurich Tristan and Ariadne auf Naxos. That is, unless a work was actually intended to be set somewhere in particular; it would never do, say, to set Don Giovanni in seventeenth-century Seville, or The Rake’s Progress in Hogarth’s London.

That would not be of much import if the Konzept worked in practice. I think it could; Giovanni is someone who takes himself not only to the edge but jumps off the precipice. Much of what happened here, however, seemed more confused than anything else. The beginning I found straightforwardly incomprehensible. We have a sort of gang leader – fair enough, though that inevitably glosses over carefully-crafted distinctions of class or order in libretto and score – and his followers (the Deutsche Oper’s Movement Choir, all impeccably well drilled), wandering around and occasionally playing golf. I wondered whether the golf were intended to be symbolic, since it seems an unusual preparation for all-weekend partying, but I could not conceive of what it might be symbolic. When women come along, Giovanni hands them score cards: seven for Donna Anna, six for Donna Elvira, five for Zerlina. Are aces high or low? Who knows? The action eventually shifts to the realm of the night, our substitute for Giovanni’s chocolate and prosciutto. Sado-masochistic scenes are enacted, yet not once do they generate the slightest eroticism. Perhaps the intention is simply: épater les bourgeois, bring a taste of the Kreuzberg scene (somewhat dated, I think) to the denizens of Wilmersdorf. In Charlottenburg, it would hardly be difficult to shock, yet so far as I could discern, the outcome was more a matter of mild, prurient interest. At any rate, there was much hearty laughter at Leporello’s slapstick falling over, which seemed to console a good few of the audience. Quite what the brief appearance of a Jesus-look-alike on an exercise bicycle was supposed to connote, I have no idea, likewise the equally brief snapshot for a blasphemous re-enactment of the Last Supper. At the end, I was bewildered once again: Giovanni’s punishment seemed to be a matter of just deserts for too many drugs and staying up late. I do not think that was the intention, but I really could not tell you what was.

Meanwhile, Leporello aside, who on earth were the other characters? Were they bourgeois visitors, curious concerning the Underground scene: the audience, if you like? Perhaps, but whatever it was they were doing most of the time, it seemed to have little connection with the main thrust of the production. One might have thought that would have given a director pause for thought, as to whether the work was being treated appropriately or coherently. That did not seem to concern Schwab, however, for he merely excised bits that he did not like. (I assume that it was his doing rather than the conductor’s.) Elvira had both her arias, but Don Ottavio only had his first. Recitatives were messed around with, either cut or simply placed on hold, whilst further stage action continued. Worst of all, Schwab followed in the footsteps of Claus Guth’s Salzburg production and cut the entire final scene. One would generally have felt short-changed: the music and our ears call for resolution. It had become too late really to care, however, in this instance. Let us not bring in here the red herring of Mahler et al.; their reasons, whatever one thinks of them, for ending where they did were quite different from those of modern-day directors.

What really did for this performance, though, was Roberto Abbado’s conducting, above all during a first act that felt interminable: St François d’Assise without the jokes. It was not so much that he was slow, though often he was, as that there was no life, no direction. Klemperer might have been stately at times, but he brought an implacable integrity that made time fly. The dullness was simply aggravated by the music at times grinding to a halt. Think what an extraordinary score this is, one of the very greatest in all musical drama; here, one would have wondered what all the fuss was about, and might well have drifted off. The end of the first act and the second act were a bit better, but were at best inoffensive. I almost – and I stress ‘almost’ – found myself longing for the odd Harnoncourtism to liven things up. The orchestra did what it could – occasional woodwind moments made one sit up – but it was severely hamstrung. Though the score was cut, the performance lasted about three-and-a-half hours, with a single half-hour interval. 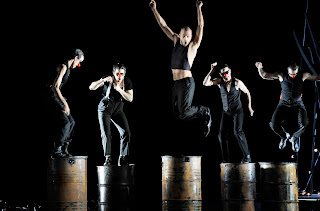 Ildebrando d’Arcangelo had his moments in the title role. The lustre of his tone was not dimmed, but the production hardly played to his strengths. Ruxandra Donose made a game assault upon Elvira, but her voice seemed strained at times; it did not fit her range well, despite transposition (what of Mozart’s carefully planned tonal relations?) Marina Rebeka generally sang well as Anna, though her tone hardened somewhat during her second-act aria, to the detriment of intonation. Yosep Kang’s vocal style seemed more appropriate to Puccini, albeit underpowered Puccini, than to Mozart. The others were fine, without making any particular impression, but again, the production made it extremely difficult for them to do so. The sole exception was Alex Esposito’s excellent Leporello. He may have been asked to do wrongheaded things but no challenge defeated him, whether of voice or of staging. He even managed, during the Stone Guest scene, to keep his line whilst doing a convincing impression of being utterly off his face on drugs. I should love to see – and to hear – him in another production.

Perhaps, then, the moral of the story – since we were denied the moral of the opera – is that the best reason to perform Don Giovanni, indeed the only reason to do so, is for itself, not to commemorate, whether a year or a place. And if one wishes to celebrate the history of the Deutsche Oper, including its forerunner, the Städtische Oper, perhaps it would be best to look to the invaluable programme history of previous incarnations: Furtwängler and Böhm both conducted new productions (1930 and 1953). That truly is a tradition to respect, to honour and to build upon. I was also reminded yet again what an extraordinarily difficult work it is to bring off. Let us see what ENO brings to the dramma giocoso in little more than a week’s time…
Posted by Mark Berry at 11:01 pm