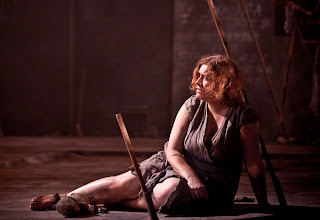 
It is often a lonely task to act as cheerleader for Haydn’s operas, so many thanks are due to the Royal Opera House for choosing L’isola disabitata for its Meet the Young Artists Week: the first ever performance at this venue, whether in the main house or, as here, in the Linbury Studio Theatre. Haydn’s general fate, not being Mozart, is perhaps more starkly demonstrated in the operatic field than anywhere else, with the possible exception of the concerto. Only a fool, and a (s)tone-deaf one at that, would denigrate Haydn’s symphonies and string quartets; I recall with anger even now the head of my college music society refusing to have any Haydn symphonies performed, since they were ‘school orchestra music’. Nevertheless, a good number of listeners – and performers – seem content to restrict themselves to a small number of works. (One could say the same of Bach’s cantatas, of course.) Yet there is a surprising number of people, many of whom ought to know better, who will dismiss all of Haydn’s operas out of hand; one wonders whether these people have ever deigned to listen to them.

L’isola disabitata is a short work (cut a little here, I think) with a cast of only four, though Haydn’s musical inspiration is not lacking. From the vigorous G minor Sturm und Drang of the overture to the delectable closing quartet – Haydn’s substitution for Metastasio’s original chorus – there is, via a considerable amount of accompanied recitative, a typical wealth of invention to be heard. There is not Così fan tutte, of course; one must turn to Mozart for that depth of characterisation and much else besides. But the musician in Haydn will always out – and the musician in the audience will always respond. Certainly conductor Volker Krafft seemed to do so, choosing his tempi well, providing a sure sense of momentum, without ever driving too hard. The excellent young players of the Southbank Sinfonia barely put a foot wrong. Though the orchestra was relatively small in number (strings 6.4.4.3.2), it did not sound so; it sounded full of life and did not shirk the anticipations of Beethoven one hears even in Haydn of 1779 vintage. The aforementioned quartet features solos for violin, cello, flute, and bassoon: all were delectably taken. Indeed, the solo work of leader Olga Muszyńska was first class throughout.

This is not a complex tale: two sisters, Constanza and Silvia find themselves lost on a desert island for thirteen years, left there by Constanza’s husband, Gernando. Constanza believes herself abandoned, though Gernando was in fact kidnapped by pirates and enslaved. He returns to the island with his friend, Enrico, and after a little ado – believing his wife to be dead, she spurning him, and so on – all ends well, with Silvia, turned against men by her sister’s plight, soon responding to Enrico’s charm. The four singers from the Young Artists Programme acquitted themselves well. Elisabeth Meister, who had previously made a great impression substituting in The Cunning Little Vixen, sang the role of Constanza with dignity and beauty of tone. Anna Devin did not prove quite so consistent vocally as her sister, but threw herself into the drama. A certain goofiness seemed to be dictated by the production; whether apposite or not is another matter. Steven Ebel and Daniel Grice impressed as Gernando and Enrico respectively. Both had occasional trouble with coloratura – nerves, most likely – but for the most part proved themselves to be reliable and warmly expressive of tone. There was an especially winning ardent quality to Grice’s baritone. 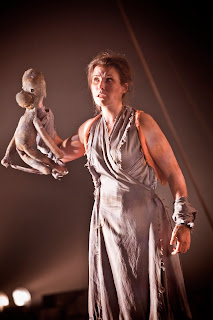 The only respect in which this performance really fell down was Rodula Gaitanou’s production. Her little programme note helps explain why. ‘As the name suggests,’ she writes, ‘L’isola disabitata is an environmental work.’ Well, not really. It is true that it takes its place amongst a number of ‘island operas’ written for Esterháza, and there are certainly points of comparison one might make, if so inclined, with Robinson Crusoe. But it is quite a stretch to set the action ‘following an apocalypse, where civilisation and humankind, devastated by an environmental disaster, no longer exist in the way they used to.’ Jamie Vartan clearly did everything he was asked to with his Waste Land-like set design, but I could not help thinking it might have been more appropriate to Götterdämmerung or Parsifal. The snorkels Gernando and Enrico are made to wear upon arrival seem gratuitous, still more so when Silvia starts playing around with Enrico’s – and with his clothes. It all begins to seem like an outing to a fetish club, whilst remaining stubbornly unerotic. I assume the idea behind Silvia’s antics was that, legs open wide, she was innocent to their meaning, a Naturkind; however, it was all just a bit embarrassing. And this is not really the place to lecture an audience on environmental catastrophe. The musical performances generally compensated though.

What next, then, for Sir Donald Tovey’s ‘Haydn the Inaccessible’? Haydn Year barely scratched the surface, especially when it came to the operas. The Salzburg Festival’s 2007 Armida was a recent – well, relatively recent – milestone in performance. Orfeo was performed a few years ago by the Royal Opera: largely, it seems, at Cecilia Bartoli’s behest; I do not think it has been revived. For better or worse, the main house at Covent Garden seems very much under director Christof Loy’s spell, so why not take advantage of this Linbury toe in the water, and try to bring Loy’s Armida to London? Even better, how about a new production of La fedeltà premiata or La vera constanza? ENO, are you listening too?

L’isola disabitata is far from the only event to note from this Meet the Young Artists Week. There is also a series of free recitals, covering repertoire ranging from Chinese songs to Schoenberg. It is worth mentioning too the proven track record of the Jette Parker Young Artists Programme; just glancing down a list of former members, one cannot fail to be struck by the number of ‘names’ who have gone on to forge successful and, in many cases, high-profile careers. Both this and the Southbank Sinfonia are fully worthy of support – and never more so than in the present climate of vicious ‘cuts’. Haydn or Trident…?
Posted by Mark Berry at 11:02 pm