My feelings about The Makropulos Case, or perhaps more accurately, my feelings during and after a performance of the work, remain somewhat in flux. Janáček does not pull the heartstrings so consistently as in some of his other works, but of course the coldness of E.M. is part of his point – and, by all accounts, she is treated far more sympathetically than in Karel Čapek’s play. Even more so than, say, Jenůfa or Katya Kabanova, the vocal writing is conversational, the composer’s restraint admirable, even awe-inspiring: there is no more playing to the gallery here than in Pelléas – well, little more. The orchestra, then, plays its role as Wagnerian Greek Chorus. And yet, occasionally, I find that I am missing something: the question is whether that something missing is deliberately absent, whether, again, it is the dramatic point. And more so than those earlier Janáček masterpieces, rather like From the House of the Dead, I find myself reflecting afterwards, and for quite some time afterwards, on what is at stake in the drama. It is, then, an opera that makes one think, but perhaps only truly moves at the end, in the final peroration, both vocal and orchestral, when one finds that very same cyclical affirmation of life in death the composer voices in The Cunning Little Vixen, and arguably as in the earlier cited tragedies too. 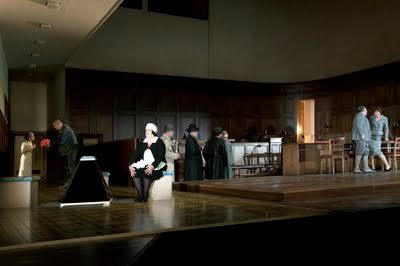 Christoph Marthaler’s fine production of Katya Kabanova originated in Salzburg, before making its way to Paris, where I saw it earlier this year. I half expected to see The Makropulos Case similarly transposed to a joyless post-war East European setting, but in many respects, the setting (splendidly designed by Anna Viebrock) is rather ‘traditional’: there is certainly nothing for ‘traditionalists’ to complain about. Unless, that is, one includes the new material with which Marthaler introduces the work: a spoken reflective conversation, not without humour. Themes that will be explored during the work, most obviously the shortness of one’s allotted years, and what alternatives there might be, are adumbrated, without overstaying their welcome. (At least I thought so, though some in the audience seemed restless.) It would seem that there is some degree of reinstatement from Čapek’s play, but I shall leave delineation of that to those better informed. (I wish that I were…) There is even humour, as there is in the opera, concerning the ways of opera singers. Otherwise, one sees a court room, as one would expect, and pretty much in ‘period’, though the voguish practice of employing the same set for each act does lead to confusion: a court room is a bit of an odd place for Marty to succumb to Prus. (Doubtless we are not supposed to understand it that way, but it is a bit odd.) Other touches to either side of the principal room work better. A railway waiting room nicely suggests transience. Whilst I can imagine that some would be irritated by the depiction of a care home – replete with Zivildienstleistender (conscientious objector performing community service: no, I am not making this up) – on the other side of the stage, it aptly suggests the alternative to EM’s immortality. And therefore, as I said, really does make one think: given society’s present treatment of the elderly and infirm, it is by no means clear that one would not give elixir a try. If Christopher Alden’s ENO production probably made more of an immediate (stylish) impression on me when I saw it the first time, it began to irritate the second time around; it is probably fair to say that Marthaler’s production has made me think more, especially after the event. One would hardly expect Marthaler to play the work for laughs, and we can be grateful that he does not. 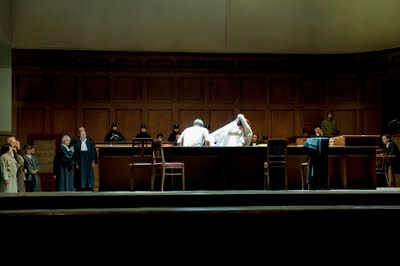 Angela Denoke performs estimably in the title role. It would be possible to castigate infelicities of tuning, for this, as one might have expected, was a performance very much in the ‘singing actress’ mould. However, such faults seemed to matter little, given the burning heat of her performance. Indeed, one could understand them, even if they were not intended this way, as contributing to the drama between aspiration to perfection and the frailty of flesh. Denoke held the vast stage of the Grosse Festspielhaus as her own, and rightly so. She was in every respect preferable to ENO’s Amanda Roocroft, though Cheryl Barker, on the first London run, was perhaps equally fine. I am rather surprised, however, to report that the other parts were more consistently cast in London (despite, of course, the gross handicap of singing in translation). Peter Hoare, for instance, was a much stronger Gregor than Salzburg’s dry-sounding Raymond Very; curiously, Hoare here movingly sang the role of Vítek. Aleš Briscein and Johan Reuter also just about stood out, though I have heard both singers to greater effect elsewhere. For there was a touch of anonymity to the general company, a surprising sense of routine, not to be exaggerated, but equally not the most memorable of Salzburg performances.

Esa-Pekka Salonen’s conducting of the Vienna Philharmonic proved somewhat disappointing. Though there were times when the orchestra sounded predictably gorgeous – and, unlike some, I really do not mind that in Janáček – one also had to reckon with a few too many loose threads, whether in terms of smudged and even missed entries, or a general lack of rhythmic bite, such as Sir Charles Mackerras and Sir Richard Armstrong both brought to the score in London. The VPO certainly can play this music; it did so memorably for Mackerras, amongst others. Here, however, it sometimes sounded as if Janáček were new and slightly unwelcome territory. Salonen seemed unwilling or unable to control the orchestra as he might have done, indeed perhaps to be still less in sympathy with Janáček’s music, the score somehow meandering aggressively, at least until the final act. Lack of tautness and indeed of formal perception went hand in hand with a tendency to play with loud indifference. Perhaps that is unduly harsh, but I expected great, or at least very good, things, and did not hear them. To my surprise, then, it proved to be Marthaler’s night rather than Salonen’s, though it was at least as much Denoke’s.
Posted by Mark Berry at 5:12 pm