This could hardly have failed to be a moving event, far more necessary by its very nature than any ‘ordinary’ concert. That the Palestine Youth Orchestra even exists, let alone that it has been able to tour the United Kingdom, is a cause for wonder and celebration. As Suhail Khoury, the General Director of the Edward Said National Conservatory of Music, told us in his brief spoken introduction, making music in Palestine, let alone Palestinians making music abroad, is ‘a constant struggle against the odds’. He also told us that two of these wonderful young musicians’ number, a fifteen-year-old trumpeter and a fifteen-year-old violinist, had not been able to join their friends, having been cruelly denied exit visits from Gaza by the occupying Israeli government. The orchestra is, to quote a former member, Mohamed Najem, ‘a world where passports and nationalities disappear, a place where Palestinians who live in different countries can meet and non-Palestinians can share’. These are musicians who, almost every day of their lives, live with far greater, more direct experience of terror than I did a single night in Munich last month; yet they come together and play, which involved learning how to live with each other. If that does not give us hope, then I do not know what will. It will not solve political problems, it will not free Palestine, but, like the West-Eastern Divan Orchestra, it does something; like the WEDO, it does it very well, with considerably younger musicians, and, in a nice touch on this occasion, involved a sprinkling of young British conservatory students too. 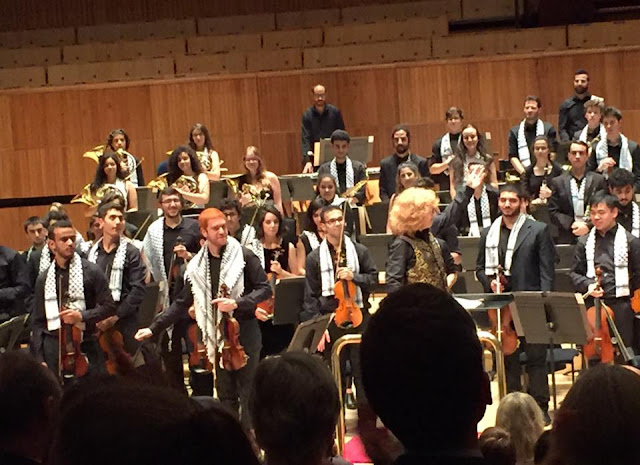 To hear Beethoven’s third Leonore Overture performed by such musicians was always likely, then, to be an overwhelming experience, and so it proved. The introduction’s opposition of darkness and light spoke truthfully – as sometimes only Beethoven can. Every note felt weighted with concrete meaning; if it meant that much to us in the audience, how much it must have meant to those on stage. Horns sounded hope, Hoffnung. And when the trumpeter, Sani Paul Meo, played his solo, first unseen, distant, then, visible and audible from a box high above, tears inevitably flowed. Some gorgeous woodwind playing and real depth from the strings offered, under Sian Edwards, a true incarnation of Beethoven’s spirit. As Layth Sidiq, the orchestra’s leader, put it, in one of several eloquent (wonderful English!) introductions and summaries from the players: ‘We hope you’ll find powerful metaphors in all the music we play tonight.’ Indeed we did. 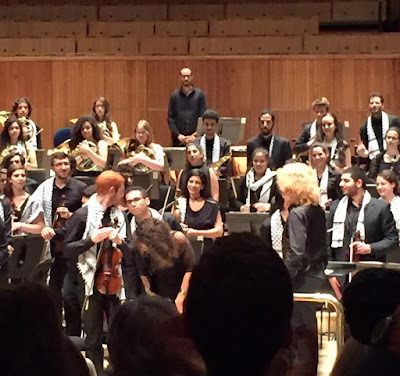 Nai Barghouti, singer, flute player, and composer (!) joined the orchestra for the next three, vocal, items. There were two songs by the Rahbani brothers, written for the Lebanese singer, Fairuz. ‘Ahtarifu al Huzna wal Intithar’ (‘Grief and waiting are my profession’) was written for the musical, River of Return. Fairuz played a small child living with her aunt in a tent, as a Palestinian refugee following the 1967 Six-Day War. The orchestra imparted an air of mystery and unease, first on a double bass solo, other instruments joining, before the voice had entered. There were grief, pain, agony to be heard from all concerned, great vocal virtuosity too. There was also hope (the planting of trees), hope which, alas, unlike in Beethoven, would be dashed. ‘Ruddani ila Biladi’ (‘Take me back to my country’) was also written for Fairuz, for an evening, ‘With Stories’, on Lebanese television in 1970. The inability of Palestinians to return to their homes is a wound that runs deep indeed, and so it sounded here. Again, however, it was not all doom and glook. Swarming strings (not un-Ligeti like!) and chirping woodwind (I thought of ‘Forest Murmurs’) took me by surprise: a recollection of ‘the banks of my happy childhood’. A catchy popular sing, with ever-interesting ‘accompaniment’ – rather more than that in reality – proved once again what star presence Barghouti has. Members of the orchestra hummed softly towards the end, her vocal shadow. 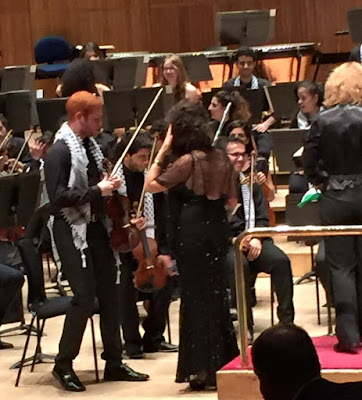 In between those two songs came Zakaria Ahmad’s Bi Ridhak ya Khaliqi, written for the Egyptian singer, Oum Kalthoum in the 1944 musical film, Salama, which starred Kalthoum in the title role of an Omayed courtesan who befriended a hermit from Mecca. However, before the song, to my delighted surprise, we heard improvisations from the ‘accompanying’ instruments to be, violin (Sidiq), oud (the other front-desk first violin player, Mostafa Saad), and cello (Naseem Atrash). There was no gainsaying either the virtuosity or the character of their playing, which provided a splendid introduction to the song and much at which to marvel in its own right. 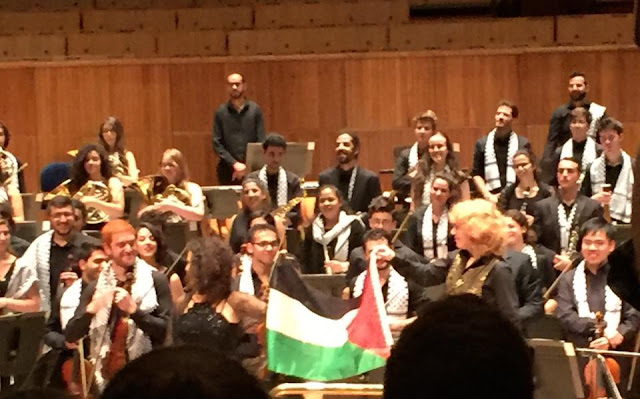 To conclude the first half, we heard Graham Fitkin’s Metal. Ten months ago, the PYO had sent out a call for scores from British composers; Fitkin’s work was chosen for this concert, the programme told us, ‘as the PYO’s homage to contemporary British classical music’. There was much for the four percussionists in particular to tuck into, the ‘metal’ referring to some of their instruments: it opens with untuned scaffolding, and four tuned bells (in the original performance, ship’s bells, a reference to the piece’s role in opening Liverpool’s Philharmonic Hall in 1995) become increasingly prominent too. The orchestra as a whole, Edwards too, clearly relished its big orchestral minimalism in a highly rhythmical and colourful performance. The performance was introduced by Scottish bassoonis, Rhiannon Carmichael, a guest with the orchestra, who repeated her final sentence in (I think!) Arabic, much to the delight of her fellow musicians. 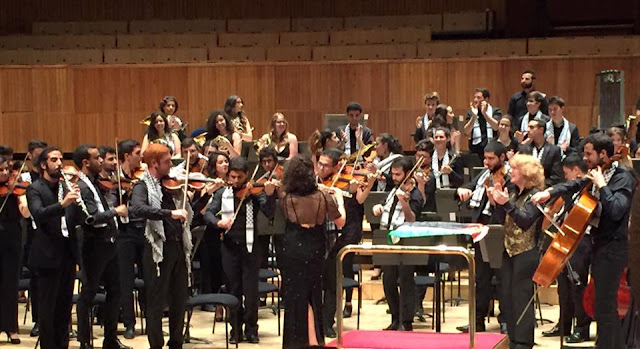 Rarely, if ever, have I so enjoyed a performance of Ravel’s orchestration of Pictures at an Exhibition. Normally, I find myself in curmudgeonly fashion asking why on earth Ravel bothered, when the piano version says it all and says it better. Here, no such objection entered my mind. A swift opening ‘Promenade’ led to a ‘Gnomus’ full of Romantic colour, imbued with foreboding, even terror. The following ‘Promenade’ sounded more Ravelian than anything that had gone before; indeed, a hallmark of the performance was the balance between Mussorgsky and Ravel. ‘The Old Castle’ benefited from a splendidly shaped alto saxophone solo, courtesy of Jamil Ajrab, and wonderfully grainy bassoon playing too. The ‘Tuileries’ proved to be gardens full of fleeting pleasure, whilst ‘Bydlo’ shattered the earth. A splendidly piquant, even humorous, ‘Ballet of the Chicks in their Shells’ prepared the way for a performance of ‘Samuel Goldberg and Schmuyle’ in which the Palestinian strings really dug into their instruments; there was splendid trumpet playing too. ‘The Market Place at Limoges’ sounded well-nigh balletic, albeit unquestionably with teeth (those, perhaps, of Mme de Roumbousac?) In ‘Catacombs’, we heard brass with a decidedly Russian accent, doubtless testimony to Edwards’s long experience in Russian music. There were shades of Boris Godunov to be heard in the string shivering of ‘Cum mortuis’, whilst the woodwind sounded – quite properly – more Ravelian. ‘Baba Yaga’ was duly barbarous. Motor rhythms seemed to foretell Prokofiev, whilst the strings once again showed quite astonishing body. The middle section’s unease proved properly telling. Finally came ‘The Great Gate of Kiev’: jubilant in it post-Rimsky Technicolor, although the more austere, more genuinely Mussorgskian (in colour, that is) passages were equally crucial to its progress. 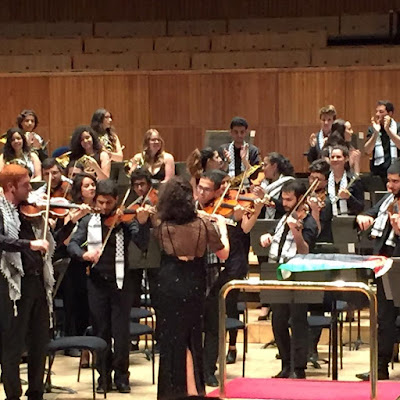 As encores we heard, first, Malcom Arnold’s Scottish Dance no.3. (The orchestra had rehearsed for a week in Glasgow, as the guest of the Royal Conservatoire of Scotland.) It made for an enchanting encore. The principal oboist, Deogracias López Garcia (a UK guest musician) deserves especial mention, but playing was excellent throughout, not least from Lohengrin-like violins. And for an unexpected second encore – we had been told there would only be one! – solo clarinet, flute (Barghouti now as instrumentalist), violin, and cello, against a full orchestral backdrop, returned us quite rightly to music from the Arab world. I shall leave you with words from Nigel Kennedy, following the Palestine Strings’ Prom in 2013 (which, alas, I missed): ‘I was struck by the down-to-earth, phenomenally positive attitude that the kids were displaying. And that is reflected in their music as well. It has such deep soul, a wholehearted commitment, and a value attached to every moment of music making and life itself.’ 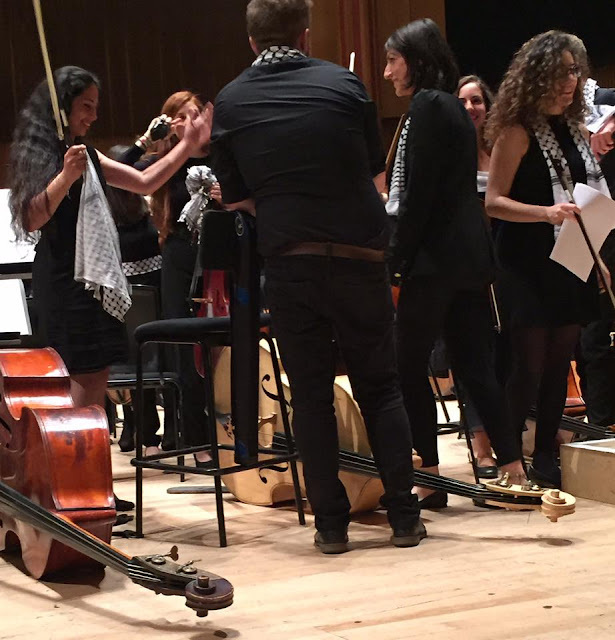