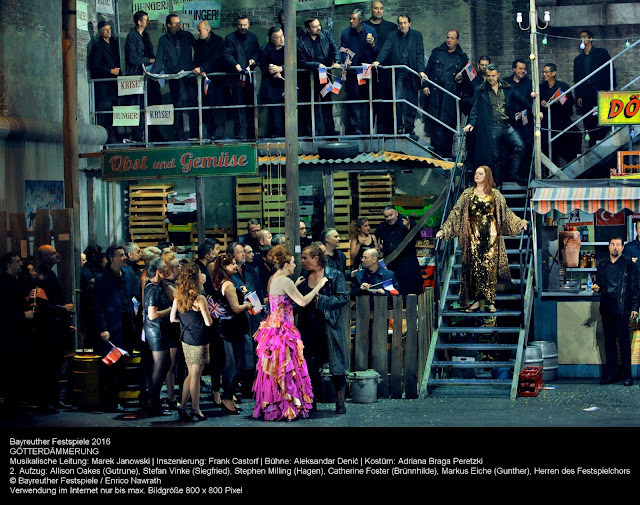 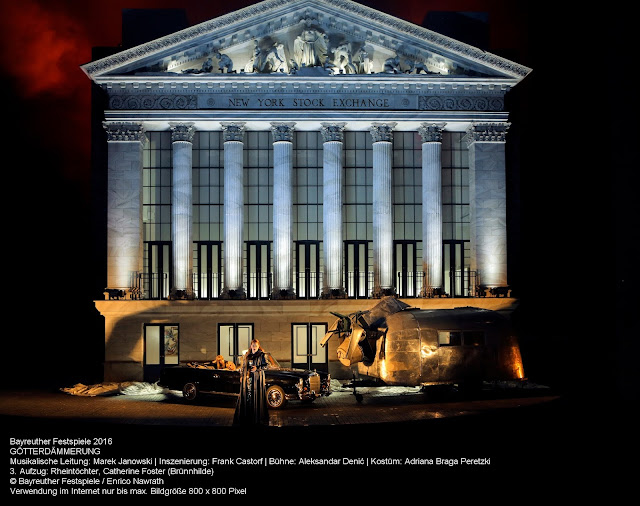 It would be a poor excuse for a Ring that did not change those taking part in it, whatever their roles – and that includes, or should include, members of the audience. Frank Castorf’s Ring of 2016 vintage will, I suspect, most likely prove to have changed me more than most. There remains an abiding irony that the two greatest live Ring performances I have heard have been concert stagings: both, believe it or not, at the highly unpromising venue of the Royal Albert Hall, under Bernard Haitink and Daniel Barenboim. I shall not even claim that I felt something was missing on either of those occasions, since I did not. It was, though; one does not have to be a crazed ‘authenticist’ to believe that, ideally, opera should be staged. An excellent staging, moreover, is all the more likely, at least in many cases, radically to transform one’s understanding of a work and its possibilities. For all its flaws, which I should neither wish to exaggerate nor to ignore, Castorf’s Ring has accomplished that in spades for me. Many of the intriguing ideas hovering, sometimes more than that, in 2014 have more fully come of age. Some, perhaps especially in Götterdämmerung, have yet properly to do so. This has clearly become, though, a striking achievement for Bayreuth. 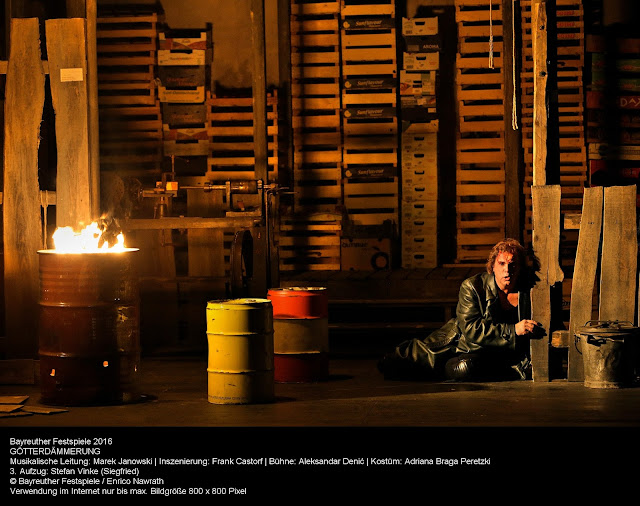 There is, however, another signal irony to mention: Castorf, it seems, has washed his hands of the production, dissatisfied with certain of the conditions in which he had to work. Quite when the changes took place, I cannot say, since I did not see the production in 2015. I think it is only fair, however, to credit Patric Seibert, not only the production’s Everyman, but Castorf’s assistant, who has remained with the staging, as well as the rest of the production team. This thought must remain speculative, but it seems quite possible that it took some distancing from Castorf to achieve a more satisfactory dialectic between engagement with and alienation from, even criticism of, Wagner’s work. Perhaps that may even be owed to Seibert’s engagement onstage with Wagner’s characters, whom Castorf himself may, at least initially, have underestimated. Whatever the precise truths concerning responsibility may be, however, we should celebrate both the achievement in itself and the reminder that opera is of its very essence a collaborative effort. Wagner, his near-superhuman efforts as provider of words and music notwithstanding, knew that very well. He did not, after all, conduct the Ring at Bayreuth, knowing that he had more than enough on his plate supervising the production. Perhaps more importantly still, he was deeply dissatisfied with the results, offering those concerned and us his celebrated exhortation, well heeded by Castorf et al.: ‘Kinder, macht neues!’ 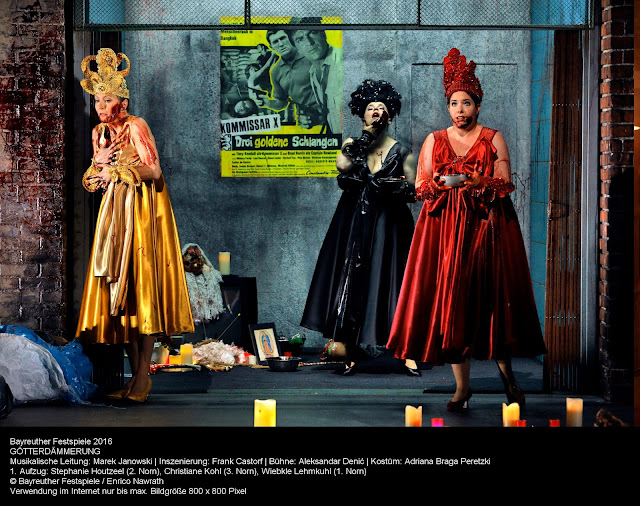 There is apocalyptic atmosphere aplenty in this grand denouement. The Norns’ cosmic tittle-tattle gains both in portentousness and in gossip-quality as they and their strange costumes – somehow both redolent of extravagance and of bag-lady existence – make their way across the stage and into a little shrine, whose function remains mysterious in its apparent meaningless. The end of the world is truly nigh, it seems. Writing on Patrice Chéreau’s legendary Bayreuth production, Günter Metken spoke of Valhalla as ‘no longer the undamaged place it once was,’ with ‘something of the unhealthy air of Venice … It is one of those choice apparitions of death conjured up by the previous [nineteenth] century, in order to repress the rapacity of daily life.’ He went on to liken the entry of the gods into Valhalla to a tableau vivant of Bruegel’s Parable of the blind — astute commentary upon both Chéreau and Wagner. It also seems rather well to fit both this Götterdämmerung, and perhaps even its relationship to Chéreau as well as to Wagner.

‘The people’, or whatever we want to call them, have not, hitherto, been entirely absent from this Ring. Indeed, their intriguing inclusion, not only in the person of Seibert’s character, but also on video (think, for instance, of the community in Die Walküre’s Azerbaijan), and its collision with a world of cruel gods, dwarves, heroes, and so on, has proved an important device not only of alienation, not only of ‘relevance’, of Aktualität, but also of dramatic interaction between those ‘kinds’ of being Wotan would rather keep apart. They are nevertheless far more present here; such, after all, is the nature of the work, in which the grand opéra chorus, as well as certain other Meyerbeerian phenomena, is triumphantly reinstated, aufgehoben. Part of the question posed seems, at least insofar as I understand, to be a classic Marxist, and indeed more generally socialist, one. In a world of abundance, the genuine achievement of the bourgeois mode of production, how can we achieve redistribution? The world can feed itself, can provide for the needs of its inhabitants, many times over, and yet does not. Hence, I think, the importance here of food. As my friend and former pupil, Sam Goodyear has pointed out to me, Wotan has previously proved conspicuous in his wastefulness. What does he care if he orders several times over at the Alexanderplatz café in Siegfried? Money is no object. 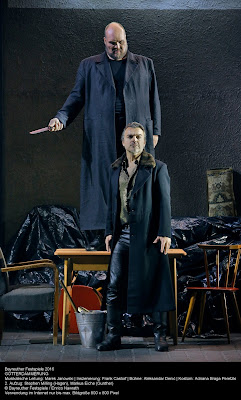 Yet there are many, labouring under the yoke of Wagner’s multiple post-Feuerbachian divinites – the state, capital, religion, power, etc., even ‘love’ – for whom the denial of food, and indeed the denial of other necessities and freedoms, most certainly does. So long as the Gibichung regime provides for the people, it seems that Gunther and Hagen will have their loyalty; and the frantic nature of provision as the crowd is worked up by Hagen in the Vassals’ Scene seems suggestive both of the relationship, increasingly stretched, between supply and demand, and of dangerously fascistic frenzy, such as we see increasingly on our streets in a Trumpist, Faragist, burkini-prohibiting world. The petty flags of different ‘nations’ underpin the violence as members of the crowd set upon each other and, perhaps most crucially, the poor Everyman who must serve them, perhaps echoing, even if unknowingly, the brutal treatment of the Migrant from Luigi Nono’s Intolleranza 1960. Video both relays the action and invite others, us included, to take pornographic pleasure in watching the goings-on, just as we do with ‘the news’. When the Rhinemaidens find the body of the murdered Everyman, and put him in the boot of their car, the end seems closer still, which, of course, it is. Their mermaid seduction of all three men, Siegfried, Gunther, and even Hagen, pleasuring them in that same car, makes a chilling point of decadence. 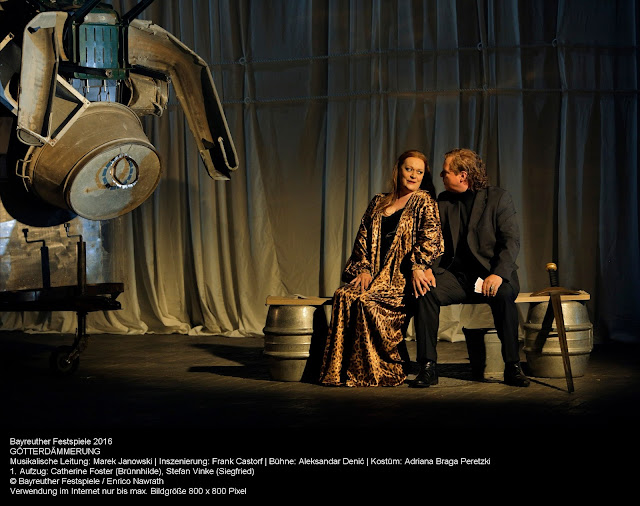 There are still certain parts of the drama, as I implied, which seem to me to work less well, with Aleksander Denić’s magnificent set designs being relied on to do a little too much of the work for themselves. The temperature drops, or at least seemed to me on this occasion to do so, for the Waltraute scene, Castorf’s impatience with Wagner’s Romantic heritage a little too prominent in the mix. And even the final scene has something of a provisional air to it at times, although it was now strongly assisted by a commanding performance from Catherine Foster as Brünnhilde. For the most part, however, a greater willingness for characters to perform their role in a greater dramatic whole, as well, perhaps, as a greater ability from a number of them to perform that role, has led to a significantly more impressive achievement.

Foster’s Brünnhilde now seemed to own the stage, equally at ease with the demands of character and production. Stefan Vinke, moreover, offered a huge improvement over Lance Ryan. The latter could act but, to put it bluntly, could not sing the part. Vinke accomplished both, even though there were understandable signs of strain at times (especially, though, early on, so it was perhaps as much a hangover from Siegfried as anything else).  Alejandro Marco-Buhrmester, an excellent Gunther indeed, found a worthy successor in Markus Eiche: darkly dangerous, no mere pushover, with violent tendencies of his own, intriguingly internalised more than externalised, nowhere more so than at the end of the second act. Stephen Milling’s Hagen initially sounded slightly on the gentle side, but quickly grew into the role – or my assumptions died away. One sensed both sadism but underlying fear too: this was anything but a one-dimensional reading. Allison Oakes’s Gutrune was very well sung, also treading well the thin line between manipulator and manipulated. As I said, I missed a degree of dramatic engagement in the scene with Marina Prudenskaya’s Waltraute, but think that may have been as much a matter of the production as anything else; it was certainly not something I could put my finger on, in what was an accomplished performance. 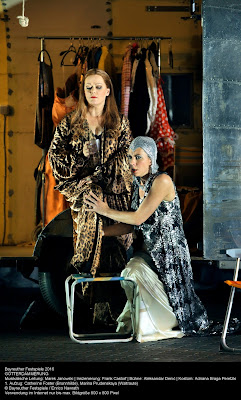 If Siegfried were the highlight of Marek Janowski’s reading of the score, then there was nothing to complain about in Götterdämmerung. The strange balances heard in both Das Rheingold and, to a lesser extent, in Die Walküre, were gone. There was, moreover, in general a fine sense of ebb and flow, Janowski unafraid to relax as well as to push forward. There were times when I longed for a stronger sense of the orchestral ‘voice’ as Greek Chorus reimagined, but that was a matter of degree. Towards the end of the first act and at the beginning of the second, there was a sense of coasting, of the orchestral temperature dropping somewhat, but again I should not wish to exaggerate. There was much to admire in Janowski’s navigation – and it was, after all, only his first year at Bayreuth, a theatre and acoustic with very specific difficulties. Both orchestra and chorus should be highly praised for their achievements; they, as much as anyone else, were crucial contributors to a truly challenging Ring. The final, distinctly unsettling feeling, mixed with the exhilaration of the conclusion of such an experience, was much as Boulez, at work on in this work in this theatre, said it should be: ‘Wagner refuses any conclusion as such, simply leaving us with the premisses for a conclusion that remains shifting and indeterminate in meaning.’ 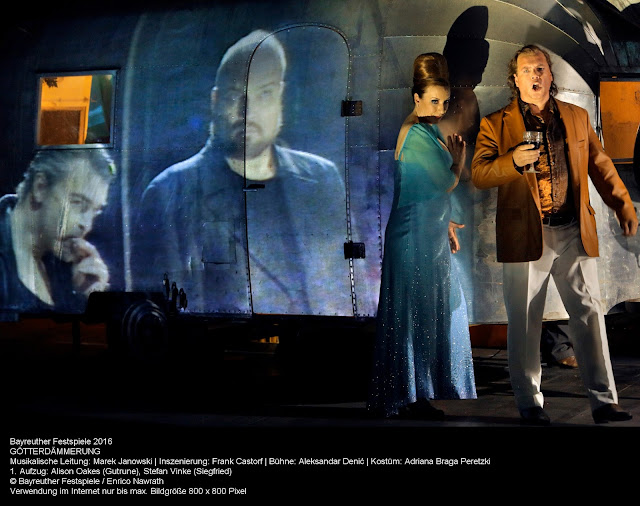