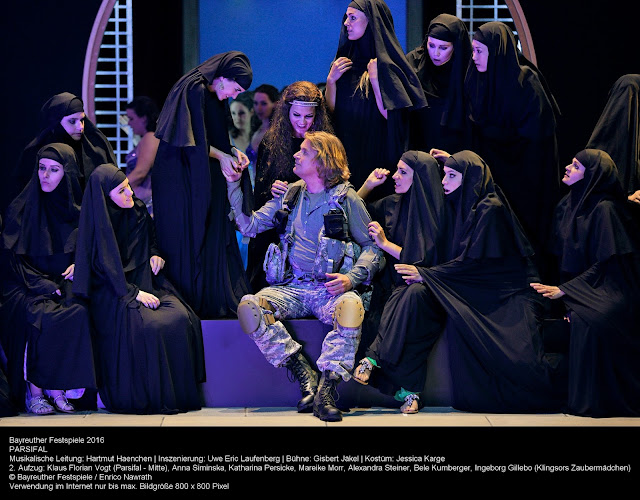 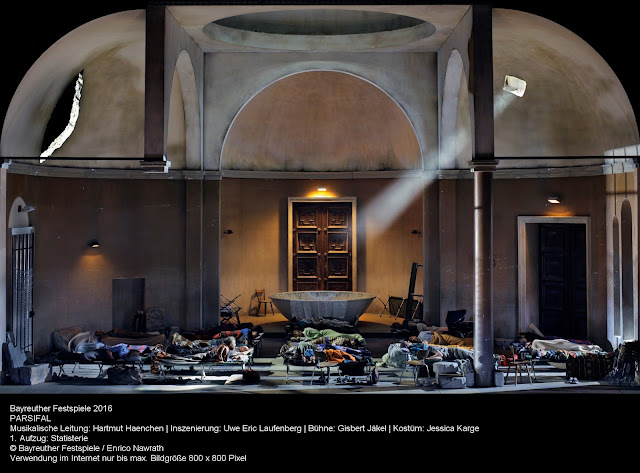 Stefan Herheim’s Bayreuth Parsifal – perhaps the greatest staging of any opera I have ever seen (reviewed here, here, and here) – was always going to be a difficult act to follow. Katharina Wagner showed considerable boldness, to put it mildly, in planning to have Herheim’s production succeeded by one from the performance artist and painter, Jonathan Meese, entirely untested as an opera director, although he had designed the sets for Wolfgang Rihm’s Dionysus in Salzburg, in 2010. The plug was pulled on that plan for financial reasons; or so it was said. Goodness knows what Meese’s Parsifal might have been; I tend to agree with Tom Service that it was ‘a shame … whatever else, it sure wouldn’t have been stultifying or conventional’. All is not entirely lost on that front, though, for a ‘new Parsifal opera’, seemingly deconstructionist yet nevertheless mythological, by Bernhard Lang will be directed by Meese next year in Vienna (at the Festwochen, I hasten to add, not at the State Opera!) 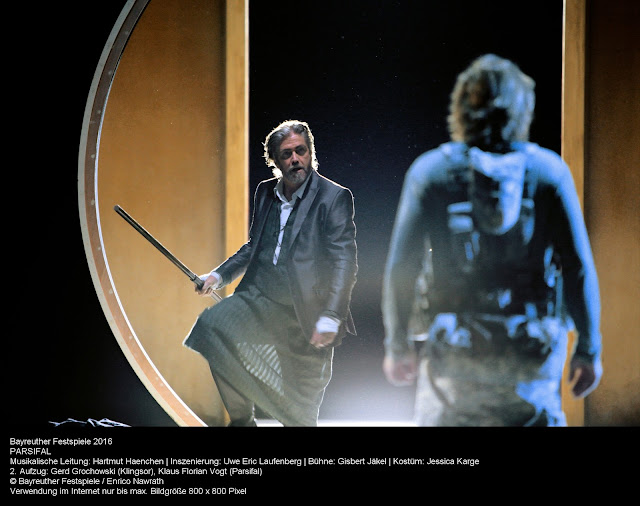 By contrast, I am afraid to say that all has been lost on the Bayreuth front with this new production by Uwe Erich Laufenberg. (And lest excuses be made about shortness of preparation time, it is actually a production originally intended for Cologne, which never materialised there.) Whilst I cannot say that earlier productions of Laufenberg’s I have seen, a Dresden Rosenkavalier and a Vienna Elektra, had proved earth-shattering, they were both intelligently put together, coherent, and with plenty of theatrical interest. None of that could be claimed of a production which is, to return to what Service said Meese would not have been, above all stultifying. Indeed, this may well be the most boring staging of the work I have seen in the theatre; take away its attempt at contemporary ‘relevance’, it might as well have been by Wolfgang Wagner or Otto Schenk. Its premise – seemingly contrived by a nightmare team of Richard Dawkins and Stephen Fry, ‘introducing’ George W. Bush as dramaturge – would have been more offensive still, had it been presented with some degree of coherence; one should, I suppose, be grateful for small mercies.

As it is, I can do no better than quote the opening Terry Eagleton’s magisterial LRB review of a book by the preposterous Dawkins (the review is more than well worth reading in its entirety):

Imagine someone holding forth on biology whose only knowledge of the subject is the Book of British Birds, and you have a rough idea of what it feels like to read Richard Dawkins on theology. Card-carrying rationalists like Dawkins, who is the nearest thing to a professional atheist we have had since Bertrand Russell, are in one sense the least well-equipped to understand what they castigate, since they don’t believe there is anything there to be understood, or at least anything worth understanding. This is why they invariably come up with vulgar caricatures of religious faith that would make a first-year theology student wince. The more they detest religion, the more ill-informed their criticisms of it tend to be. If they were asked to pass judgment on phenomenology or the geopolitics of South Asia, they would no doubt bone up on the question as assiduously as they could. When it comes to theology, however, any shoddy old travesty will pass muster. These days, theology is the queen of the sciences in a rather less august sense of the word than in its medieval heyday. 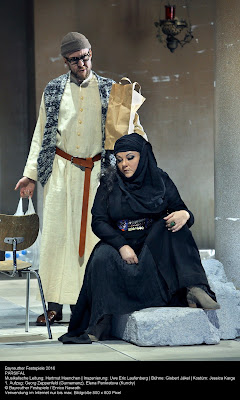 It would be tempting to leave matters there, but alas, I should say something about the production myself, not least to attempt to justify the strong words above. Laufenberg takes us, with as much insensitivity as it would generally be possible, to Iraq. When the curtain opens, part way through the first Prelude, we see what appear to be refugees taking shelter in Monsalvat, which turns out to be a Christian community in war-torn territory. Running across the stage from time to time are some oldiers, presumably American, although I suppose they could be Blairite. Lest we feel unduly sympathetic, however, to people whose country has been invaded and their temple trashed, we learn that they are ‘fanatics’. If only they did not have such silly beliefs – no musician would ever consider the transcendent, would (s)he? – no one would ever have thought of destroying their lives; after all, Iraq was not about oil, was it? And so, in the sole powerful theatrical moment – however dubious – of the whole production, Amfortas is put on to the Cross himself, actually crucified for a while, and made to contribute blood himself to feed the community. Because that is what Iraqi Christians do, is it not? How good of a rational European to point that out to them and to us. The pornographic treatment of Ryan McKinny’s wounded, muscled body, naked, save, bizarrely, for what seems to be a nappy (!), suggests an object of devotion in itself. That might, in other circumstances, have led somewhere; Monsalvat is, after all, a dying community (cf. Dmitri Tcherniakov). Here, one can only presume, we are merely meant to appreciate that these simple folk are not only hopelessly deluded; they are sick perverts too. The rest is vapid nothingness – never more so than in what seems to be a bizarre misunderstanding of ‘Zum Raum wird hier Zeit’, the Transformation Music set to an expensive-looking video that takes us out into space, for an aerial view of the world, prior to homing in on our ‘conflict zone’. Religion, eh: what a terrible thing it is; how stupid it must seem to Martians and to enlightened earth-dwellers. 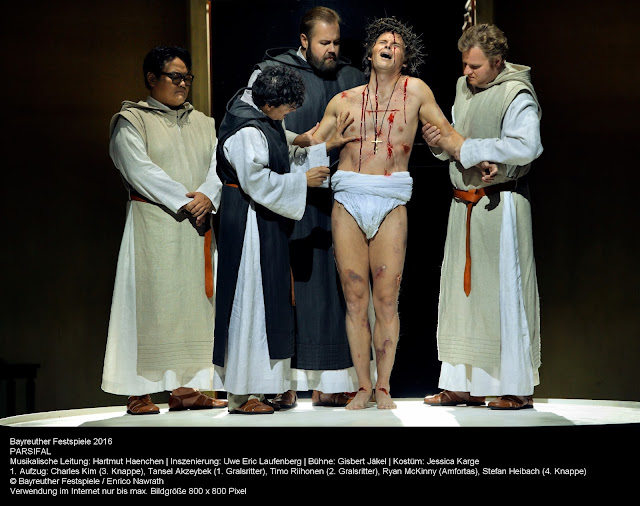 What to do for the second act? Let us be really brave, speak truth to power, spurn Western imperialism and racism, and have a go at Islam. Klingsor’s Magic Garden seems to be in ISIS-lite-land. Muslims, you see: they are both savages and hypocrites. Klingsor keeps a stash of crucifixes, perhaps stolen from the foolish Christian knights: perhaps he is ‘really’ a Christian himself, or perhaps it is just loot. Who cares? Later on, he flagellates himself (with his clothes on), excited by Kundry’s attempts at seducing Parsifal. There is worse, though, much worse. Soldiers again run across the stage from time to time; Parsifal, it turns out, is one of them. Being an American soldier of course means that he must be in the right. The Flowermaidens come onstage, hijab- or niqab-clad. (I do not think there was anyone with a full burka, but could not bring myself to look too closely.) Parsifal is not interested. They come back, having shed their modesty; interested he most certainly now is, and the Arab world is what it should be, an ‘exotic’ fantasy playground for white heterosexual men. So, having essentialised women’s bodies, reminded us  what they are really for, and having shown us what Islam is really about (probably even worse than Christianity, and equally lacking in subtlety, depth, or difference), we can sit back and endure a theatrically inert seduction. Amfortas – has the poor soul not suffered enough? – joins as a spectator, because otherwise we should not understand that he has some connection with what is unfolding. For anyone who might care, Parsifal makes no sign of the Cross at the end; I genuinely have no opinion whether that were a good or bad thing in context. 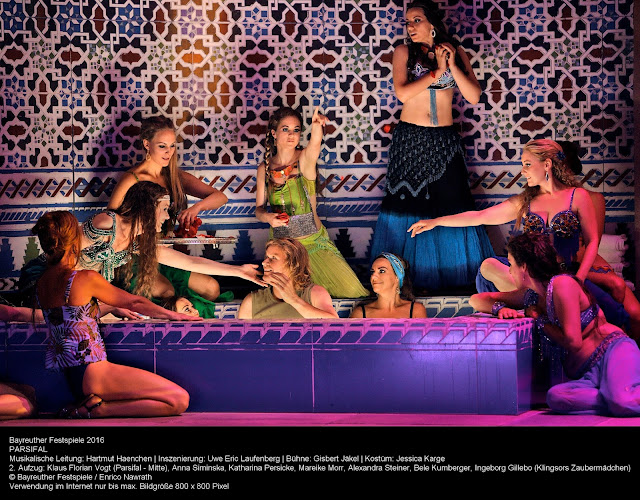 If there were at least some ‘offence interest’, however trivial, in the first two acts, the third commits, pretty much without exception, the ultimate sin of inducing boredom. Members of three faiths, Christianity, Islam, and Judaism, get together, realise that they are all the same really, sing Kum ba yah (well not actually, but they may as well have done), and all is well; perhaps they will no longer even be refugees. En route to that revelation and revolution, we see some liberated (that is, naked) erstwhile Islamic Flowermaidens; relieved of their Islam, they are now able to show kindness to an elderly Kundry. Charity, of course, begins outside ‘religion’. Kundry and Gurnemanz take turns in a wheelchair, although the former seems quite sprightly the rest of the time: what a fraud! The final scene continues the eradication of theology: would it not be a grand thing indeed if we were to follow suit?

Musically, things were much better, although not good enough to offer ample compensation; that may, in any case, have been too much to ask. Hartmut Haenchen’s conducting was efficient; he clearly knew the score, but offered little beyond that. His briskness was, perhaps, in these particular circumstances, no bad thing; would we really have wished to linger? In the lead up to the Good Friday Music, however, the tempo was so absurdly fast that even that potential virtue was lost. Speeds in themselves are of little interest here; both Pierre Boulez and Daniele Gatti have had much to tell us about the work. But being fast is not a good in itself, any more than being slow might be. Far too often, the score seemed merely to be skated over. The Bayreuth Festival Orchestra played, as one might have expected, very well indeed, but was too often subdued and harried by its conductor. Although much better in the third act, and impressive in heft throughout, the chorus, to my surprise, proved somewhat erratic of intonation during the first act. 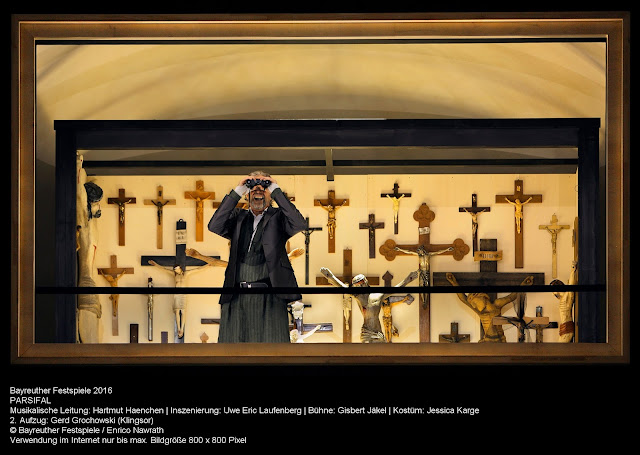 At least the singing was good, in two cases outstanding, those two cases being McKinny’s Amfortas and Georg Zeppenfeld’s Gurnemanz. Both showed something very close to the ideal musico-dramatic alchemy between words and music, heightening the meaning and impact of both. Zeppenfeld’s heroic stint at Bayreuth – I have seen him in the Ring, Tristan, and Parsifal! – must be regarded as one of this year’s great successes at the Festival. Reactions to Klaus Florian Vogt tend to focus on whether people like or dislike his highly controversial voice. It seems to me considerably better suited to Lohengrin than to Parsifal, but, on its own terms, Vogt’s performance was highly commendable. If the results were sometimes bland, at least to my ears, it is always a relief simple to hear a tenor capable of singing a Wagner role. Like McKinny and Zeppenfeld, Vogt can act too; so can Elena Pankratova, as one really noticed in the third act, when she has next to nothing to sing. If only the acting skills of all could have been put to better use. Whilst Pankratova’s vocal performance was sometimes a little wayward, it was nevertheless capable of thrilling beyond the more obviously histrionic passages, and often drew one with considerable subtlety to listen. Karl-Heinz Lehner and Gerd Grochowski offered laudable performances as Titurel and Klingsor respectively; so did a fine bunch, as it were, of Flowermaidens, likewise our Knights and Squires. 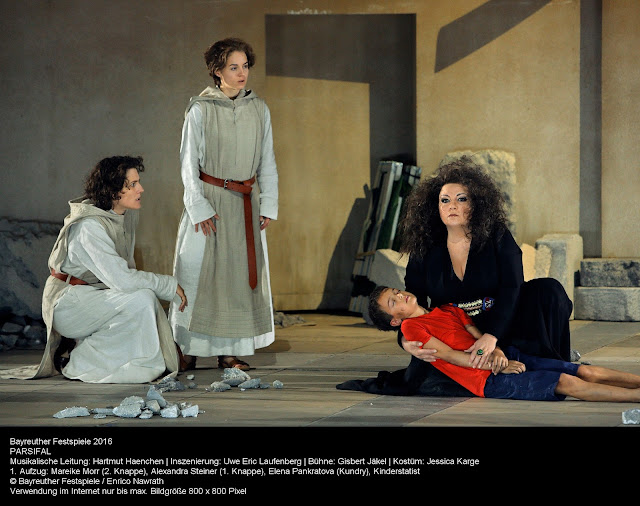 Who on earth (or beyond it?) the man seated above the stage, his back turned to us, may have been we never did find out. God? Wagner? Jonathan Meese? One had long since ceased to care. Perhaps we should let Meese have the next-to-last words: ‘Richard Wagner ist, wie Meese, ein Kunstfanatiker mit dem Tunnelblick K.U.N.S.T. Richard Wagner ist keine Ersatzreligion, Richard Wagner ersetzt alle Religionen. Richard Wagner ist die Machterzergreifung KUNST, Meese's Parsifal ist Kunstherrschaft. Meese dient dem Richard Wagner ohne Falsch.’ One does not have to agree, or even to understand, to sense that Meese might have offered something more engaging, perhaps even something more sympathetic towards Wagner’s complex relationships with theology and religion. Nach Wien, then… 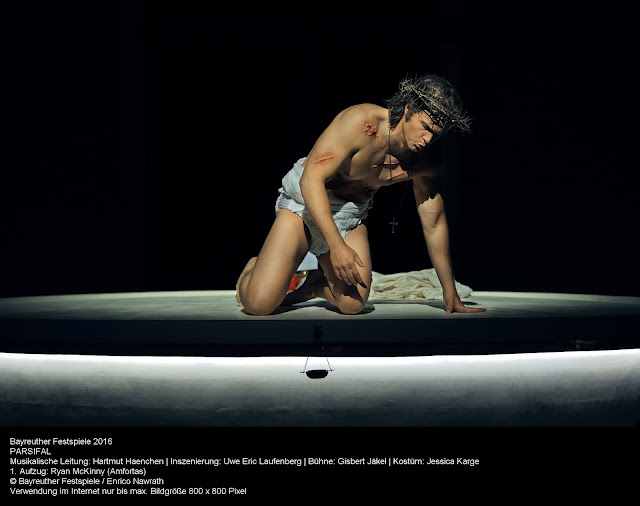