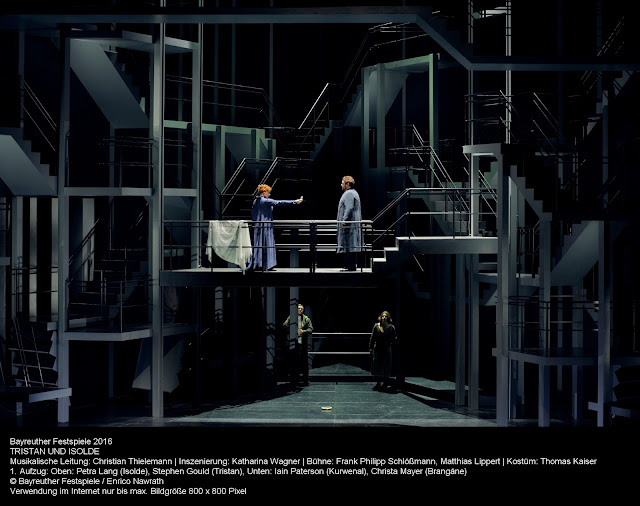 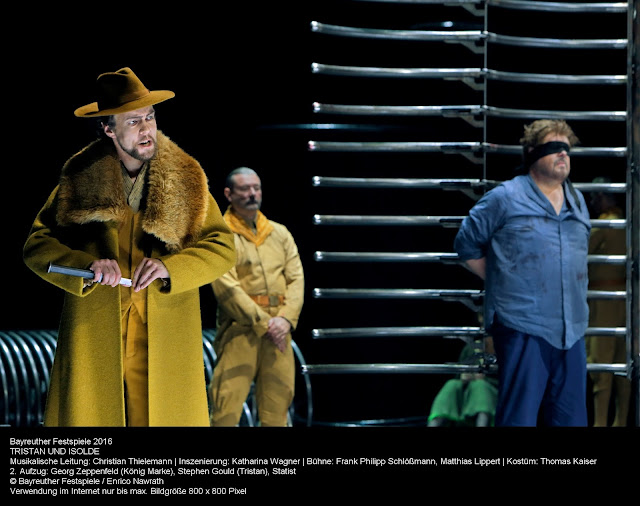 Let me summarise the case for Katharina Wagner’s defence; in this production, that is, rather than more generally. It is certainly better than her Meistersinger, although its problems are not dissimilar in quality. Nothing is downright embarrassing: remember those shoes being thrown all over the place for several minutes, because, well, because Hans Sachs is a cobbler (who nevertheless does not wear shoes himself), or a child-from-the-Stolzing-future requiring a lavatory break during the Quintet? This time, at least, it seems that the characters are doing what they are supposed (by the director) to be doing; there has clearly been progress made in terms of the director’s craft.

There are, moreover, several visually striking aspects to the mise-en-scène, for which designers Frank Philipp Schlößmann and Matthias Lippert certainly deserve credit. In some cases, although not all, they point to engagement with and a welcome critical standpoint with respect to the drama. The first act’s setting in a labyrinth, full of dead ends and other pitfalls, persistently – yet not entirely successfully – preventing the lovers from meeting presents a striking metaphor. That for the second act, in which Tristan and Isolde are constantly under King Marke’s surveillance, cruel, harsh spotlighting directed from above, initially makes its point well, taking on board Wagner’s Day/Night antithesis, and extending it, even questioning it. This is clearly a cruel world indeed; it may be understood politically, psychologically, or in both ways. The darkness of the third act is again visually attractive, and the images in which Isolde appears – I wondered to begin with whether something was being done with the white hands of legend, but then thought not – are again striking, even if their framing stands perhaps a little too close for comfort to Herbert Wernicke’s Covent Garden triangles. Tristan’s interaction with these empty ragdolls of his imagination is sensitively accomplished, although somewhat repetitive after a while. And the revisionist view of King Marke – yes, of course it is at odds with the surface of the text, but is it so very wrong to question, from time to time, its ideological basis and assumptions – is in itself welcome. His dragging Isolde off at the close, transfiguration clearly an idle, Romantic delusion, duly chills. 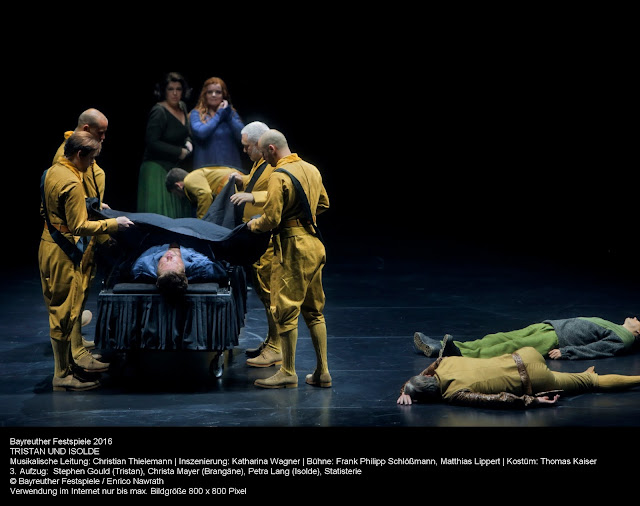 For the fundamental problem, however, is not so dissimilar to that of the hapless Meistersinger. Whilst there are striking images and ideas – in some instances at least, one presumes, dramaturge, Daniel Weber should at least share the credit for the latter – very little, at least until that striking conclusion, is really done with them; or, in some cases, too much of little import is done with them. I am all for an audience having to do some thinking for itself; a production that fails to accomplish that is unworthy of the name. Nevertheless, it seems to me, that there is a world of difference between, say, Frank Castorf’s Ring (at least so far, in revised fashion, as seen in 2016) and a staging (which may well, of course, undergo significant revision of its own in the future) in which the first act is made up more or less entirely of people running around, platforms being raised and lowered, and, on a couple of occasions, Tristan and Isolde are all over each other. Similarly for the stylised torture-medical (?) paraphernalia of the second act. Melot’s murder of Tristan, entirely without agency on the part of the latter, might have been suggestive; as it was, however, it came across as merely ‘different’ for the sake of it. If it were not for the striking designs – less happily striking in the hideous yellow costumes of Marke and his men – it would not be so very different from the most conventional, ‘traditional’ production. Although the screams of one audience member as I left the theatre – ‘They’ve changed the ending! You can’t change the ending! You can’t change the ending!’ – left me feeling more sympathetic with Katharina Wagner’s production than I might otherwise have done, having upset a person seemingly possessed of no critical abilities whatsoever is not in itself enough. 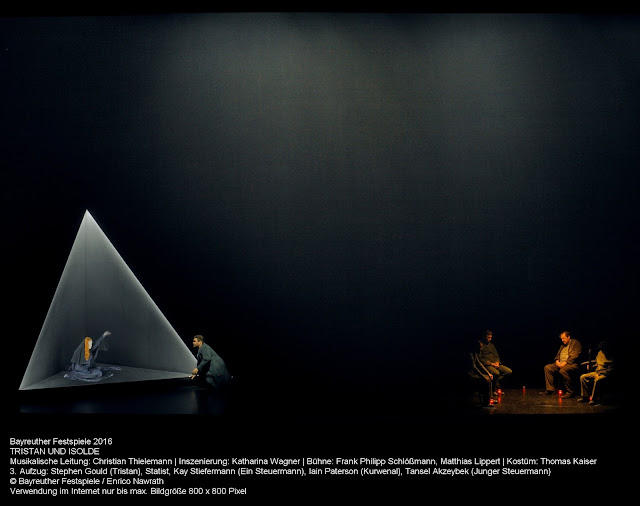 There is not really very much being said, then, whilst, at the same time, Wagner’s insistence – and I have yet to see it properly contradicted, on stage, in practice – that this is a metaphysical drama, majestically unconcerned with the ephemera of external representation, goes sadly unacknowledged. For, when condensing the action of Tristan und Isolde into a few words for Mathilde Wesendonck, the composer, in full Schopenhauerian flow, did not even mention Marke’s forgiveness (which is perhaps not so very important, then, to undercut). The action, he suggested, as much by omission as by commission, was not really of this phenomenal world at all; even Tristan’s agonies went unmentioned upon the way to ‘redemption: death, dying, destruction, never more to waken!’ (Erlösung: Tod, Sterben, Untergehen, Nichtmehrerwachen!) Now that need not be taken on trust, although this drama seems curiously, almost uniquely, resistant to attempts to question it on stage; the dots, however, need to be joined up a good deal more convincingly than they are here. Ultimately, what we see becomes tedious – and not in a self-critical, ‘let us consider tedium’ manner.

Fortunately, we were on much, much surer ground musically, permitting metaphysics a not insignificant re-entry to the proceedings. Hearing Christian Thielemann, in the finest Wagner I have heard from him for quite some time, made me realise that I had, in fact, been bending over backwards to excuse the shortcomings of Marek Janowski’s handling of the Ring scores (so far). De facto music director Thielemann has, of course, a huge advantage over Janowski: he has been dealing with the peculiarities of the Bayreuth acoustic – and pit! – for many years; indeed, he conducted Die Meistersinger here on my first visit, in 2000. And so, that fabled Bayreuth sound, more or less entirely absent, whether by design or otherwise, from Janowski’s performances, was once again a real presence amongst us. Perhaps I should say a variety of that fabled sound, for Thielemann tends perhaps to a slightly glossier, even more Straussian, sound than, say, that other fabled Bayreuth Straussian Tristan-master, Karl Böhm. 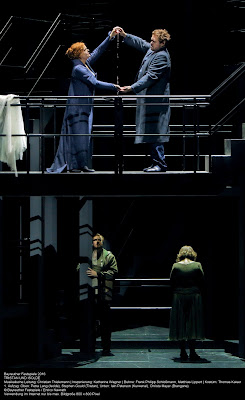 Beneath the surface, though – and what a glorious surface it was, all the more so for Thielemann’s not un-Barenboim-like willingness to let Debussy-tilting woodwind have their say too – there was undoubted rigour. Not only did the orchestra twist and turn, growl and gloat, speak and dissent as his fabled Oper und Drama successor to the chorus of Attic tragedy; it constituted, at least as much as merely representing, the Handlung of Wagner’s designation for the work. It was, I think, a reading of avowedly tonal understanding, such as would have pleased Wagnerian colleagues as distant ideologically from one another as JPE Harper-Scott and Roger Scruton. Schenker would have been proud. In the agonies of the third act, I might prefer something more Schoenbergian, more prepared at least to consider the air of another planet and the way it might criticise the (admittedly) iron-clad tonal structure of the work as a whole. (I think, for instance, of a performance Esa-Pekka Salonen gave with the Philharmonia in 2010.) Not every performance, not even one by Furtwängler, can present all of the potentialities of a Wagner score, though; no one would have been disappointed, or indeed anything other than thrilled, by the work of Thielemann and his orchestra, now back on superlative form.

It is unusual indeed not to find oneself making excuses for a Tristan cast, but there was no need to do so on this occasion. Bayreuth should be in the business of engaging casts to challenge, at the very least, those to be found anywhere else in the world; here it succeeded in doing so. ‘Untiring’ is often, in the Heldentenor world, a part-euphemism for ‘unpleasant, wildly out of tune, but he kept going’; not so in Stephen Gould’s case. Gould was able to put that ability to pace himself to thoroughly musical use, shaping his phrases with care, with dramatic meaning, in most cases equally careful with his words. The clarity of Petra Lang’s diction came and went, but hers was a powerfully dramatic reading, in which the somewhat unusual – for the role – colouring of her voice was relished. Her first-act sarcasm towards Brangäne, flouncingly acted as much as sung, was very different from that of, say, Birgit Nilsson, but made its point. I was less keen on the broken phrasing of the opening of her (non-)Verklärung, but it seemed to be part of a genuine effort to point to words as well as music. 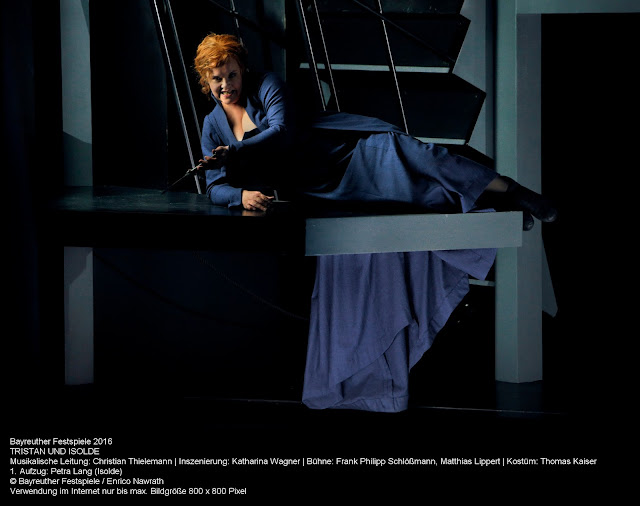 Christa Mayer was as fine a Brangäne as I can recall hearing, wide of dynamic range and colour, unfailing sympathetic (perhaps especially when Isolde did not wish to hear). Iain Paterson seemed more at home with Kurwenal than the Rheingold Wotan, not that there was anything to complain about in his portrayal of the latter. This was a trustworthy, kind, unfailingly human servant and (failed) friend. Georg Zeppenfeld’s Marke proved as distinguished, at least, as his Hunding the previous night, exhibiting many similar musico-dramatic virtues. Zeppenfeld’s delivery of the second-act monologue was in no sense hampered by the director’s unsympathetic view of his character. Quite the contrary; potential difficulty was transformed into meaningful dramatic counterpoint. Tansel Akzeybek, whose Froh I had previously found uncommonly sweetly sung, offered similar pleasures in the twin roles of the Young Sailor and the Shepherd; I hope to hear more from him. Music, then, redeemed the work, or rather the production. Nietzsche’s opus metaphysicum was, more or less, reinstated as such.