I saw Sven-Eric Bechtolf’s production of Così fan tutte three years ago in the Haus für Mozart. It seemed initially to have been heavily revised for its new venue in the Felsenreitschule, until I realised that it was indeed a new production. Quite why, I am not sure, for his first Così seems to have been the most successful part of his Da Ponte trilogy for Salzburg. (The Don Giovanni was, in a fiercely contested field, one of the worst I have ever seen. I could not face seeing the Figaro after that, but nothing I have heard about it has had me regret that decision.) 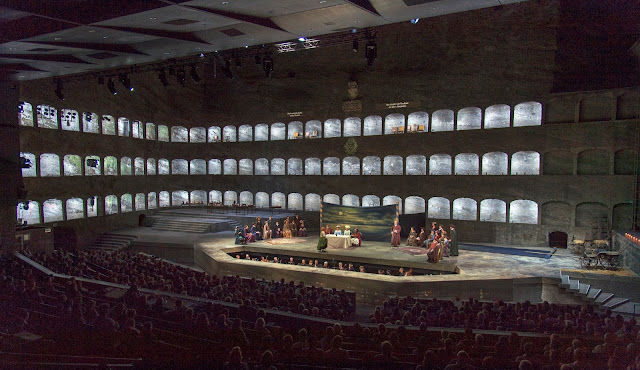 Bechtolf here retains the eighteenth-century setting: ‘beautiful’ frocks and all, for those who care about such things. There are hints at good ideas, but rarely, if ever, are they seriously followed through. For instance, we see something we might associate with the subtitle’s school for lovers (‘La scuola degli amanti’) at the opening, although it seems to have more of a medical bent than one might expect. No harm done: there is, after all, a strong current of Mesmerism and other strange ‘natural philosophy’ to the plot. However, apart from occasionally seeing frock-coated members of that school hanging around the stage, that is more or less it. Likewise, the nod to the work’s artificiality in having painted backdrops, such as a ‘beautiful’ Bay of Naples, mounted and dismantled during the action; again, however, we really need more than that. Making use of the extraordinary Felsenreitschule setting is of course a good thing, but it needs to be more than simply having characters run around above the stage for the sake of it. Otherwise, we have a thoroughly ‘traditional’, even regressive, staging, interrupted in utterly philistine fashion by deeds of slapstick, which have no place whatsoever in Mozart – however much they might delight certain cretinous members of the audience. (They laughed, moreover, at the most peculiar times. Do they not realise this is the most agonising, heart-rending of all Mozart’s operas? Do they react similarly to Mahler’s Sixth Symphony or the St Matthew Passion? One can only assume they do not listen to the music at all.) I could go on at greater length about the production but see little point: half-baked to a – well, to whatever soggy point things that are half-baked are half-baked to…

Musically, things were much better. I had worried that Ottavio Dantone might bring a self-consciously ‘authenticist’ reading to the work, but there was little of that. His tempi were varied, judicious, and flexible: always sounding as if they were reached in cooperation with the singers. And the Mozarteum Orchestra was able to sound like itself, warm of string tone, with woodwind both fruity and aristocratic, with no absurd prohibitions on vibrato or other such mannerisms. The sweet sado-masochism of Mozart’s score was able to tell in all its cruel glory.


It was an excellent cast too. Despite a few intonational issues in ‘Come scoglio’ notwithstanding, Julia Kleiter gave a commanding performance as Fiordiligi. She was certainly alert to the cruel parody in Mozart’s mock-seria writing; if only her director had been. Angela Brower made for an excellent Dorabella, very much her own, freer character: silkier, perhaps, when compared with Kleiter’s fine Egyptian cotton. If I have heard a sweeter-, more seductively-toned Ferrando than Mauro Peter I have forgotten – which seems unlikely. Alessio Arduini’s Guglielmo was proud, assertive, flawed: just as he should be, whether vocally or in stage manner (Bechtolf’s absurd interpolated dances notwithstanding). Martina Janková, the sole survivor, from 2013, again impressed as Despina, hers a thoroughly musical rendition, rendering no quarter for caricature. Michael Volle’s Don Alfonso was simply outstanding: what presence vocally he has, and how it is matched with command of the stage! There was much, then, musically to delight, enabling this truly extraordinary opera’s message of existential despair to register as it should.